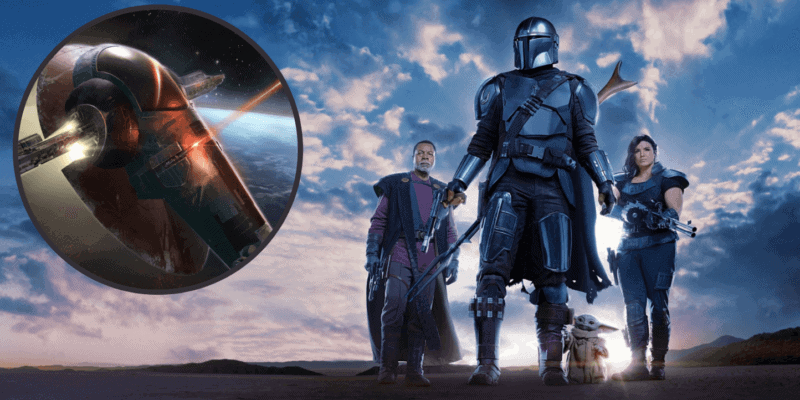 Slave I is one of the most famous ships in Star Wars lore — save, of course, for the always iconic Millennium Falcon.

The modified Firespray-31-class patrol ship is infamously associated with Jango Fett — Boba Fett’s father and the clone template for the Grand Army of the Republic.

Boba Fett (Temeura Morrison) has already made his return to the Star Wars universe — albeit briefly — in The Mandalorian Season 2, Episode 1 (Chapter 9: The Marshal).

At the end of the episode, fans caught a glimpse of Fett, whose famous Mandalorian armor now belongs to Din Djarin (Pedro Pascal) thanks to his deal with Mos Pelgo Marshal Cobb Vanth.

Now, reports indicate that we might not have seen the last of Boba Fett in the sophomore season of Jon Favreau’s hit streaming Star Wars series. As per MovieWeb:

…Slave I’s cockpit was recreated for The Mandalorian season 2. Apparently the iconic ship will make an appearance by the end of the season, though no other details were provided. It’s not clear if we’ll see Boba Fett pilot Slave 1 or if someone else on Tatooine might end up in it. With that being said, there was already speculation about a possible standalone Boba Fett series, which could also use the cockpit that was created for The Mandalorian.

While we don’t know for sure where Favreau and Dave Filoni are headed later this season — or in any potential spinoff series inspired by characters from The Mandalorian — it is certainly possible that the Slave I cockpit will be used for multiple projects.

It’s highly unlikely that Morrison would have been cast to bring Boba Fett back to Star Wars for a single, incredibly short scene. Whether he returns in Season 2 of The Mandalorian — or even next year’s Season 3 — or shows-up in his own series, this Slave I news indicates we certainly haven’t seen the last of the fan-favorite bounty hunter.

Are you excited to see Jango Fett’s iconic Slave I ship again? How do you think it will be brought back to the Star Wars galaxy?