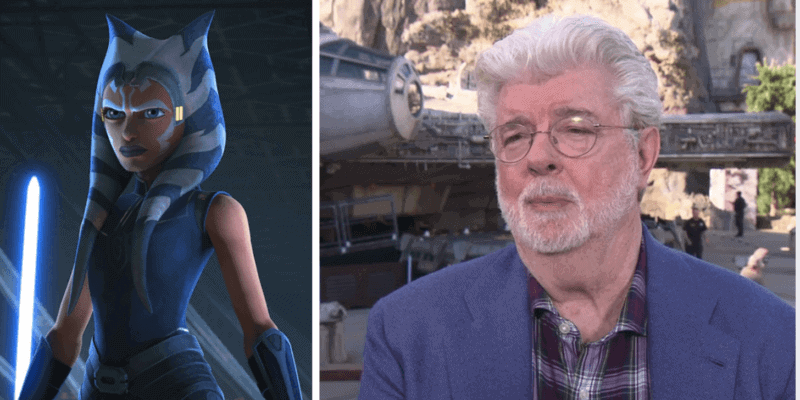 Long-time fans of Star Wars have loved Ahsoka Tano — voiced by Ashley Eckstein and portrayed in live-action by Rosario Dawson — since her first appearance in the animated Star Wars: The Clone Wars (2008) movie.

Later, Ahsoka appeared in two animated television series — Star Wars: The Clone Wars and Star Wars Rebels. Although the fan-favorite character was never really out of the spotlight — she even shares a surprising Star Wars record with bounty hunter Boba Fett — the Togruta has been back in the spotlight thanks to her live-action debut in The Mandalorian.

It seems, however, that if Star Wars creator George Lucas had gotten his way, Ahsoka Tano never would have made it out of the Clone Wars series alive. Dave Filoni — who developed the character alongside Lucas — gave fans some insider information about why Ahsoka walked away from the Jedi Order in an interview that was shared earlier this year:

…if Ahsoka rejoined the Jedi, she likely would have died in Order 66, aka the Jedi Purge. But that’s also exactly what George Lucas wanted.

“I don’t think it’s a mystery that I’ve always been a bit more into the ‘Ahsoka Lives’ camp. And George has been very full-on in the ‘Ahsoka Dies’ camp,” Filoni said. “So I thought expelling her from the Jedi Order is a good move towards that end. And we stand on that bold, new frontier for her. Things have changed. She’s not the same character.”

Ahsoka’s departure allowed for her to live on as a powerful Force wielder but not really a Jedi. And with that, she went on to appear in Rebels and more.

Now, as Ahsoka continues to play a pivotal role in the Star Wars universe, there’s no telling exactly where her story will go next, especially if Mandalorian creator Jon Favreau and Filoni bring Dawson back to reprise her role in Season 3 or Season 4 of the hit Disney+ Star Wars series.

She already gave us The Child’s real name — Grogu — and helped Din Djarin (Pedro Pascal) and The Mandalorian’s massive fandom understand his backstory, including how he survived the execution of Order 66.

What do you think? Are you Team Filoni or Team Lucas?