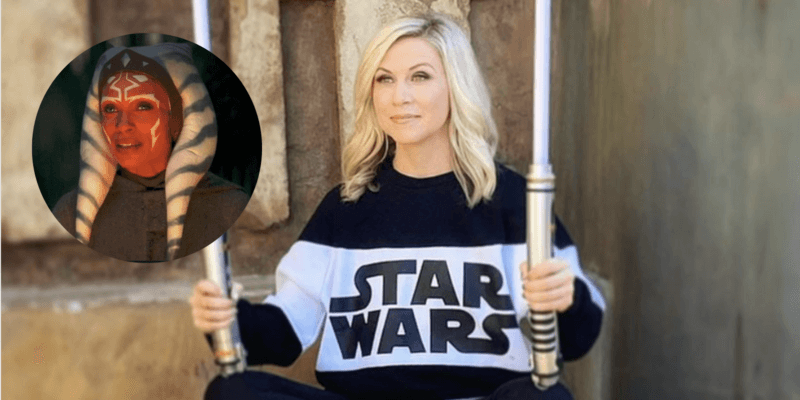 When rumors initially began to surface that The Mandalorian showrunner Jon Favreau and Dave Filoni might be bringing iconic animated Star Wars character Ahsoka Tano to life, fans were thrilled.

Related: Could Ahsoka Tano and Bo-Katan Get Their Own Disney+ Series?

Ahsoka — who was created by Filoni and Star Wars creator George Lucas — appeared in two animated series, Star Wars: The Clone Wars and Star Wars Rebels. She has, until The Mandalorian, always been portrayed by voice actress Ashley Eckstein.

Eckstein, however, was apparently passed over for the live-action role, with casting directors ultimately deciding on Rosario Dawson instead.

At the time Dawson’s casting was confirmed, Eckstein shared this social media post:

“The truth is. I am not involved in The Mandalorian. I can’t answer questions for something I have not been a part of. I am an actress and I have performed in all types of mediums; live-action film/television, theater, voice-over, hosting and it has been my dream for 14 years to continue to play Ahsoka Tano in all forms. I will continue to be grateful for opportunities to help create stories for Ahsoka Tano and I am always happy to see her legacy continue. I am only one member of a tremendously talented team of people that it takes to bring Ahsoka Tano to life. The final decisions of Ahsoka are not mine to make and I cannot comment on something that I truly know nothing about.”

Now, however, in a new Vanity Fair article, Dawson has confirmed that Eckstein was never far from her mind as she approached her live-action portrayal of Ahsoka Tano. She shared:

“Ashley did a remarkable job. You’ve seeing this character first come into our hearts and minds as a teenager and then evolve, and Ashley has been there the entire way. Seeing how her voice changed, how her energy changed, and to hear the maturity develop in her was just so powerful and so beautiful. I studied it like crazy and tried my best to honor that. And it was just incredible to be able to have such an in-depth performance to source.”

“Ashley’s fantastic and I think the character that she played, Ahsoka as the young Padawan apprentice and then going into Rebels, obviously made its mark—plus the animation team who made this Padawan such a household name amongst Star Wars fans. It’s a pretty magic thing and it speaks to how well-crafted the character is by that group. I wrote pretty much all of her character from when she’s 14 all the way up through this, and normally someone in my position wouldn’t get to do that. It would have changed hands several times.”

For fans of the original Ahsoka Tano actress, reading Dawson and Filoni give her just due is certainly inspiring. Although some wish that Eckstein had still been cast in The Mandalorian, most fans were incredibly impressed with Dawson’s acting prowess onscreen in Season 2, Episode 5 – Chapter 13: The Jedi.

What are your thoughts on Ashley Eckstein’s influence on the live-action version of Ahsoka Tano?