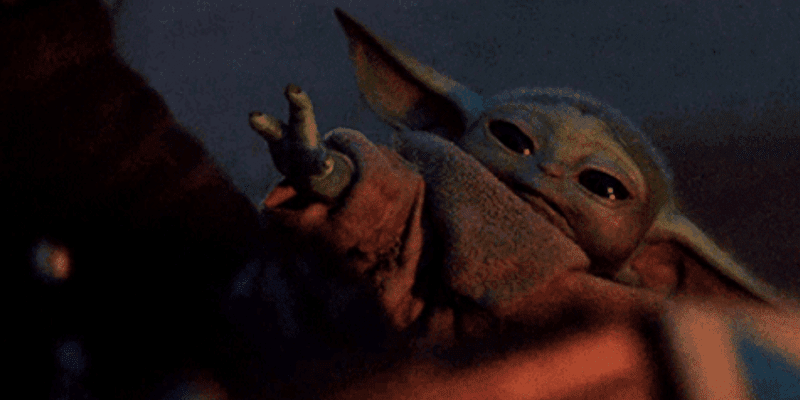 Attachment leads to jealousy. The shadow of greed, that is…Train yourself to let go of everything you fear to lose.

Anakin — who later becomes Darth Vader — did not, of course, heed this warning. His love for Padmé Amidala never faded and there was nothing Anakin feared more than losing her. Ironically, of course, she “lost her will to live” following Vader’s betrayal and, ultimately, died giving birth to twins Luke and Leia.

Perhaps, then, more than anyone else, Anakin Skywalker’s Padawan, Ahsoka Tano (Rosario Dawson in The Mandalorian/Ashley Eckstein in Star Wars: The Clone Wars), understands the importance of the Jedi Code’s forbiddance of attachment.

In this week’s episode of hit Disney+ streaming series The Mandalorian, fans met Ahsoka in live-action for the very first time when Din Djarin (Pedro Pascal) finally tracks her down on the forest planet Corvus outside of the walled city Calodan — where the Magistrate is portrayed by Diana Lee Inosanto, Bruce Lee’s goddaughter — seemingly fulfilling his quest to deliver The Child to a Jedi who can help the Force-sensitive being forge the right path.

What Din isn’t expecting, though, is for Ahsoka to blatantly refuse to train The Child — real name, Grogu.

After explaining Grogu’s unfortunate backstory to Din, Ahsoka asserts that the galaxy’s cutest creature has hidden his Force powers in order to protect himself because he felt scared and isolated — until he met the title Mandalorian.

She says, “I’ve seen what such feelings [feelings of attachment] can do to a fully trained Jedi knight [referring, of course, to Anakin] —to the best of us. I will not start this child down that path.”

Ultimately, even after Din tries to broker a deal with Ahsoka by teaming-up — as he quips, “A Jedi and a Mandalorian? They’ll never see it coming.” — to defeat the Magistrate, the Jedi refuses to initiate Grogu’s training.

Ahsoka does, however, give Din new directions — literally. She says he can take Grogu to Jedi ruins where the duo will find a “seeing stone” on top of a mountain. Once there, The Child will have the ability to choose his own path — dark or light — and could, potentially, reach out to other remaining Jedi with The Force.

This could be how showrunner Jon Favreau brings back Mark Hamill as Luke Skywalker — a running rumor in the fan community.

Is it possible that The Mandalorian’s creative team is about to have The Child turn to the dark side? Absolutely.

Earlier in the episode, Ahsoka even sets up this possibility by telling Din, “His attachment to you makes him vulnerable to his fears, his anger.”

There is no denying that watching Grogu grapple with what we now know was a truly traumatic “childhood” on Coruscant would make for a fascinating story arc. Chapter 13 proved what many fans already suspected — there is far more to “Baby Yoda” than meets the eye.

Having him potentially turn to the dark side would not only be a twist no one saw coming, but give Favreau, Filoni, Bryce Dallas Howard, and others involved in the immensely popular series an entirely new set of stories to explore. Can you imagine, for instance, a Mandalorian season in which Grogu sympathizes with Moff Gideon (Giancarlo Esposito)?

An unsettling thought? To be sure. An intriguing one? Undoubtedly.

While we cannot know for sure what the rest of Season 2 — not to mention Season 3 and Season 4 — hold for Grogu, Din Djarin, and the rest of The Mandalorian cast, we can certainly say that there is never a dull moment in Favreau’s incredible addition to the Star Wars universe.

What do you think? Will The Child channel his hurt and insecurities into the dark side of The Force?