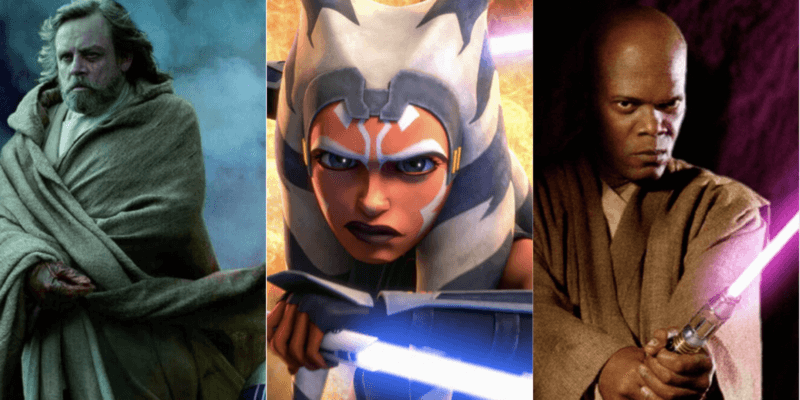 This week’s episode of the hit Disney+ series The Mandalorian is titled Chapter 13: The Jedi — many fans have been working under the assumption that the Dave Filoni-directed episode will introduce Ahsoka Tano (Rosario Dawson) in live-action for the very first time.

There is, however, a chance that showrunner Jon Favreau and his creative team could throw a major curveball and introduce another Jedi Knight instead — try the likes of Mace Windu (Samuel L. Jackson) or Luke Skywalker (Mark Hamill) on for size.

While neither Disney nor Lucasfilm — nor either iconic Star Wars actor, for that matter — have confirmed anything about appearing in The Mandalorian Season 2, fans are wildly speculating that the storyline could go in this direction.

Let’s take a look at both fan theories.

Mace Windu in The Mandalorian

MovieWeb best outlines how Mace Windu — and his purple bladed lightsaber — could show-up in Chapter 13 of The Mandalorian:

Many have long suspected that Mace Windu lived after being electrified and shot through that window by Palpatine. Mace Windu’s body was never recovered, and the fact that both Boba Fett and Darth Maul died crueler fates only to later be resurrected means anything is possible. The latest Star Wars fan theory believes Mace Windu landed on his feet and soon after went into hiding, fighting the Empire from the shadows. Some believe he did this under the disguise of a Mandalorian’s helmet.

As a matter of fact, both Samuel L. Jackson and Star Wars creator George Lucas have confirmed their belief that Mace Windu is alive.

Luke Skywalker in The Mandalorian

The fan theory about Mark Hamill reprising his famous role as Luke Skywalker in The Mandalorian comes courtesy of Reddit. As the speculation goes, this is what could happen:

After meeting Ahsoka on Corvis, she proposes they go to Dagobah to seek the counsel of her old teacher, master Yoda. At this point in canon, we don’t know where Ahsoka was during the Original Trilogy, but we can assume that she’s not aware of Yoda’s death.

Upon arrival on Dagobah, they find Yoda’s hut has been vacant for some time, but she senses someone strong in the force. The force guides her to man by a fire outside of a cave. She senses a familiar force signature; similar but different.

The shadowy figure introduces himself as Luke Skywalker. Ahsoka explains that she was once his father’s apprentice and served with Obi-wan Kenobi. Luke asks about who his father was before he was Vader. Until this point, Luke knows very little about the man Anakin Skywalker was, so it would be nice to see him learn about his father.

One thing that tracks with this theory is that it does heavily involve Ahsoka Tano — who we know will be appearing in the sophomore season of the Star Wars show.

However, there are still several issues that would have to be accounted for if Hamill were to appear as Luke Skywalker on The Mandalorian this week. For starters, Hamill is simply too old to portray a relatively young Luke at this point — CGI or splicing in old footage could remedy this, in theory.

Another — more major — issue is that Hamill has indicated he has no intention of playing Luke Skywalker again following his dissatisfaction with the end of the Skywalker Saga with Star Wars: Episode IX – The Rise of Skywalker (2019).

What do you think? Are we meeting Ahsoka Tano, Mace Windu, or Luke Skywalker — or, some combination thereof?

Comments Off on Is the Jedi in This Week’s ‘Mandalorian’ Ahsoka Tano or Luke Skywalker?