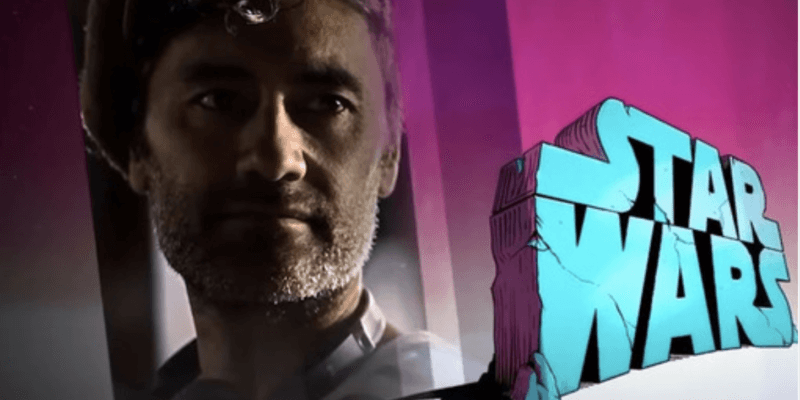 At The Walt Disney Company’s 2020 Investor Day virtual event last week, the news was coming fast and it was challenging for even the most dedicated viewers to keep up with everything that was being announced.

While Kennedy said this, a brand new Star Wars logo [featured above] — that looks a bit “stone age” instead of “space-age” — appeared on the screen behind her. The logo appears to be made from cracked rocks and almost has a The Flintstones vibe, indicating that we could be traveling way back in time for Waititi’s Star Wars movie installment.

Some Investor Day viewers have noticed:

..the blocky, stone-like typeface for Star Wars that bears an uncanny resemblance to the equally iconic logo of the 1959 religious epic, Ben-Hur. At the time the most expensive Hollywood movie with a budget of $15 million, Ben-Hur tells the story of Judah Ben-Hur, the Jewish prince and merchant in Jerusalem who becomes a slave and finds glory in chariot racing.

Aside from the many, easy-to-Google scholarship devoted to analyzing the religious themes in Star Wars, there is no direct parallel to the story of Ben-Hur in Star Wars.

With Lucasfilm’s apparent move away from trilogies following the conclusion of the Skywalker Saga with Star Wars: Episode IX – The Rise of Skywalker (2019), there’s no reason Waititi’s movie couldn’t go in a completely new and different direction from Patty Jenkins’s upcoming Star Wars: Rogue Squadron (2023) — and where better to draw inspiration from than the Golden Age of Hollywood?

The same viewers noticed another intriguing potential plot clue during Kennedy’s December 10 presentation. At one point, a diamond-shaped ship appeared on the screen, seemingly hurtling toward an unknown planet.

Related: Pedro Pascal Says the Mandalorian Could Appear in the Next ‘Star Wars’ Movie

The Star Wars Wookieepedia describes Tho Yor as:

…the name given to the eight great pyramidal ships that carried the Force-sensitive ancestors of the Je’daii Order [Jedi Order] to Tython in 36,453 BBY, in what was termed the First Migration. Following their arrival on Tython, the ships spread out around the planet and deposited their passengers onto the world where they constructed cities and temples at the spot of their arrival.

Intriguingly, Jon Favreau and Dave Filoni’s hit Disney+ streaming series, which already has two planned spinoff Star Wars series, has been set-up as the epicenter of the next era of Star Wars stories — and Tython has played an important role in the second season of the show. In fact, it is where Moff Gideon (Giancarlo Esposito) stole Grogu from Din Djarin (Pedro Pascal). Furthermore, Waititi has Mandalorian experience — he voiced droid IG-11 in Season 1 and directed the first season’s finale, Chapter 8: Redemption.

If anyone is willing to delve into a brand new, never-before-seen-in-canon age in a Star Wars film, we’re willing to bet it’s Taika Waititi.

Waititi himself has teased his Star Wars directorial debut, quipping he can’t wait to “ruin” Star Wars for the notoriously fickle fandom.

What do you think? Has Lucasfilm already given us clues about what Oscar winner Taika Waititi’s Star Wars movie plot will be? Next up for Waititi under the Disney banner is Marvel Studios’ Thor: Love and Thunder (2022), a follow-up to Thor: Ragnarok (2017).