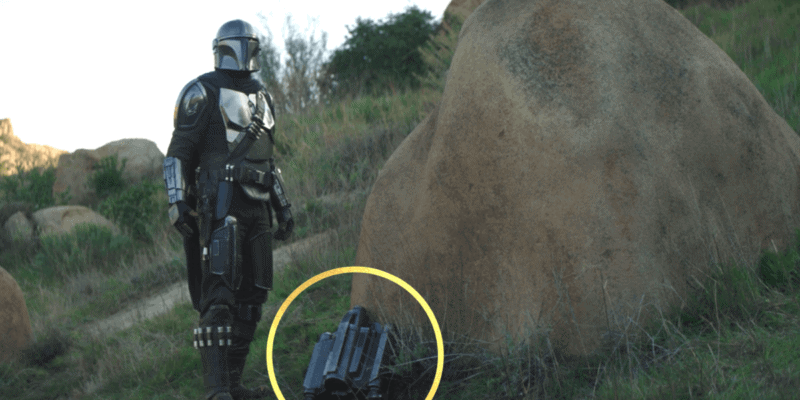 Chapter 14 of Star Wars: The Mandalorian left our hero, Din Djarin (Pedro Pascal), in a tough spot. In less than an hour, fans watched him lose his home, the Razor Crest, Grogu, and… his jetpack?

Amid other known bloopers in Season 2 — specifically jeans guy and the helicopter — Mando seems to have also lost track of his jetpack.

In his initial standoff with Boba Fett (Temuera Morrison) and Fennec Shand (Ming Na Wen), and desperation to keep Grogu (Baby Yoda) safe, Djarin appeases the bounty hunter’s demands and takes off his jetpack for peaceful negotiations. But, just moments after that, the action begins as Moff Gideon and his stormtroopers descend upon them. Djarin, acting more and more like a father, was so focused on Grogu that he runs back to the seeing stone to check on The Child without giving his jetpack a second thought.

However, there are two moments in the events that follow that don’t seem to make sense.

No “Where’s My Jetpack?” Moment When Dark Troopers Take Grogu

As soon as he took off the jetpack, I was expecting this moment, and I was even more surprised when it didn’t come after the Dark Troopers took off with Grogu. Since Djarin received the jetpack, he has never taken it off and he has gotten more and more in-sync with it as time has passed. Using it has become almost second-nature to him.

He undoubtedly knew that he could follow after the Troopers and most likely perform an epic mid-air rescue with Boba as his wingman in Slave I. So, why wasn’t that his first instinct?

We know that he would be willing to give it up for the sake of “the kid”. We see him hand it over to the ambusher at the beginning of Chapter 10. But, he remotely — very pointedly — piloted the jetpack to get it right back.

So, such a hesitation could be forgiven. Being so connected to the jetpack, Djarin was certainly cognizant of the fact he left it on the ground when he took off running. But, if that was the case, he would’ve gone back for it at the end, right?

Okay, so “Mando” gets caught with his pants down, in a sense, and has to fight without his jetpack. It happens and helps intensify the dire state he is in. But, those fights end with the hero composing himself. At least, they usually do.

Instead, Djarin spends his time rummaging through the cratered remains of his home, finding the ball Grogu loved to play with and the beskar spear he was given by Ahsoka Tano (Rosario Dawson) (via Morgan Elsbeth, played by Diana Lee Inosanto). We then learn more about Boba Fett and his Mandalorian armor (formerly Jango Fett’s), and the three — Din, Boba, and Fennec — become a team ready to go save the kid.

We even see Boba Fett’s jetpack in action, and Djarin makes a comment about it. Yet he still doesn’t think about his own?

So the scene must have been cut and he went to get it back offscreen, right?

It would appear that way, but when we see Djarin visit Cara Dune (Gina Carano) at the end of the episode, he is still not wearing the jetpack. This suggests that it was never recovered.

It is completely out of character for Din Djarin to just abandon one of his most prized possessions, especially one that almost completes his Mandalorian battle armor and is made out of the precious beskar that he has been so determined to get back into Mandalorian hands.

I can see what the show was trying to do. Mando appealing to Dune without his jetpack symbolizes how incomplete he is without the kid. He is now so connected to Grogu that part of him is now literally missing. But, it still feels like sloppy storytelling to me. I hope that Din Djarin appears in Chapter 15 with his jetpack. If he doesn’t, it has to be addressed on some level. It is too significant of a symbol for fans to just let fade into the Force.

The other option, of course, is that Jon Favreau and Dave Filoni are already two steps ahead and have a plan for the case of the missing jetpack — perhaps a later return to Tython or another plot ploy.

Chapter 15 of Star Wars: The Mandalorian debuts this Friday, December 11.

What do you think happened to Din’s jetpack? Let us know in the comments!