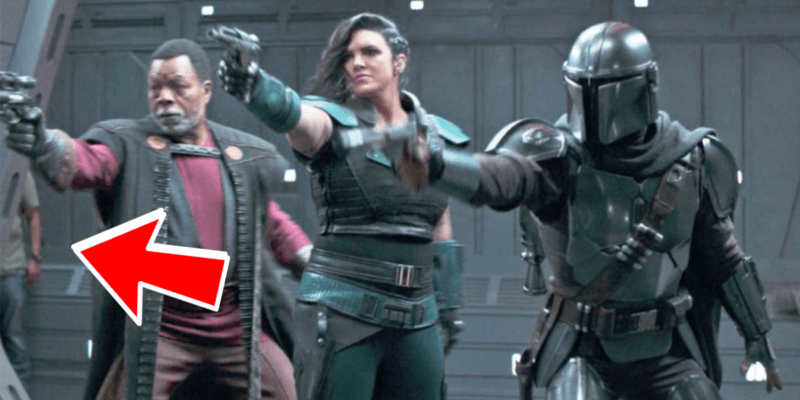 Eagle-eye fans remember spotting a crew member in the background of Raiders of the Lost Ark and Pirates of the Caribbean: Curse of the Black Pearl during important moments in the films. Fans of Game of Thrones were appalled when a coffee cup was spotted in the background of the series finale, and the goof turned into an internet sensation. Now, it appears that The Mandalorian sports its own blooper in the latest episode on Disney+.

Related: When Will Ahsoka Tano Appear in ‘The Mandalorian’?

As the Mandalorian and The Child make their way to Nevarro for repairs, Djarin reunites with old friends from season one of The Mandalorian. Carl Weathers both starred in and directed Chapter 13, making a good reason why this goof slipped by during filming.

While secret Empire agents repair the Mandalorian’s Razor Crest, Din Djarin joins Karga, Dune, and The Mythrol’s (from season one of The Mandalorian) demolition mission of destroying an Imperial Base on Nevarro. When they realize that the base is “quite operational,” plans change, and it becomes a shoot-out between the heroes and Stormtroopers.

In Chapter 12: The Siege, at approximately 18:53 into the episode, you can spot a jeans-wearing crew member in the background as Carl Weathers’s Gree Karga, Gina Carano’s Cara Dune, and Pedro Pascal’s Din Djarin storm an “abandoned” Imperial Base on the planet of Nevarro.

You can spot the culprit on the left below:

Above, you can spot a man who is obviously not apart of the Star Wars Universe in the bottom left corner of the frame. He’s wearing a green t-shirt, jeans, and a sweet watch of some sort. Though you can spot the left-side of his body, at least his head was blocked and didn’t wholly distract viewers from the scene.

This blunder can potentially be put on COVID-19. Though filming for season two of The Mandalorian finished in November of 2019, post-production (editing, audio, etc.) was done during the lockdowns of 2020. Maybe, as a result of editors possibly working remotely from home, this little blooper slipped by.

While the episode was nonetheless fantastic and only adds to The Mandalorian‘s successful streak, it’s pretty funny to see such a little blooper in showrunners Jon Favreau and Dave Filoni’s brainchild. In my opinion,  Star Wars fans shouldn’t shame Disney or The Mandalorian cast, but instead, get a good laugh out of it. After all, Raiders of the Lost Ark — one of the greatest movies of all-time — features its owned jeans guy in the back of the Arabian Market scene.

Perhaps that jeaned figure is Emperor Palpatine in disguise, watching how his Empire is rebuilding? Or maybe it’s Kylo Ren as “Matt” on Undercover Boss? Perhaps George Lucas was dropping in to see how The Mandalorian was unfolding?

While The Mandalorian is still on a hot streak of success, this on-screen goof should only strengthen the love for the show, as it reminds us that everyone is human and we all make mistakes.

We can’t wait to see what happens next in The Mandalorian!

Did you catch the jeans guy? Let us know in the comments below!