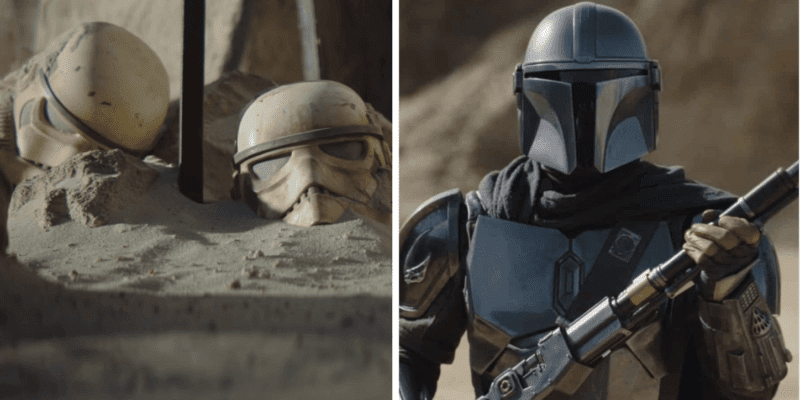 The Mandalorian has — surprisingly, perhaps, to everyone but longtime Star Wars fans who love the show purely for its story — become a pop culture phenomenon, sparking everything from ugly Christmas sweaters to Grogu cereal.

There’s something about Grogu (AKA “The Child” AKA “Baby Yoda”) that has universal appeal, but the Mandalorian himself — Din Djarin (Pedro Pascal) — is fascinating in his own right.

Din has a history and that’s part of what makes him so intriguing — the lone bounty hunter who once traveled the galaxy purely for his own purposes, now strangely connected to a tiny green foundling. It’s a tale that stirs emotions, no matter who you are.

Even as the Mandalorian becomes increasingly more of a father-figure to Grogu, he still carries bits and pieces of his past with him, quite literally. Din’s Mandalorian armor is more than beskar — it also features trophies from stormtroopers he’s killed.

Matyas reveals Mando’s armor incorporates elements from trophy kills. “I started pilfering from some pieces of designs that I really liked, like the shoretroopers and death troopers,” he explains. “Essentially, we’ve only seen them in Rogue One. I would think they’re rare. So, if he has a bounty where he kills one, it’s like a trophy.” Interestingly enough, though, it seems these trophies have gradually been replaced over the course of the series. Din Djarin obtained a large quantity of beskar for turning in Baby Yoda in The Mandalorian season 1, and this was forged into replacement parts for his armor. She specifically replaces a shoulder pad, which had originally been taken from a Shoretrooper.

In the book, Matyas also shares additional details about how he created Din Djarin’s armor — which went through numerous various before becoming the beskar armor Mandalorian fans see each week in Jon Favreau and Dave Filoni’s hit Disney+ streaming series.

“So, this was my first assignment [Din’s armor]. The design brief was very specific about the helmet being clean and new, like [the armor in Excalibur (1981)], just the raw metal, and the rest of his armor old, with some history to it. The armor could be mix-and-match, like he pilfered it off of his fallen ‘victims or bounties.'”

Personally, as someone who actually prefers Din Djarin to The Child, I love this new look at the history behind the Mandalorian’s armor. It gives him depth and proves that he doesn’t take his background lightly.

The fact that Din can simultaneously carry the weight of his past, yet care so much for Grogu — which we’ve seen more and more of in his Season 2 character development — is a testament to where Favreau and Filoni are taking this Star Wars character and to the continued development we are sure to see in Season 3 of The Mandalorian and beyond.

What do you think about the somewhat macabre secret behind Din Djarin’s beskar armor?