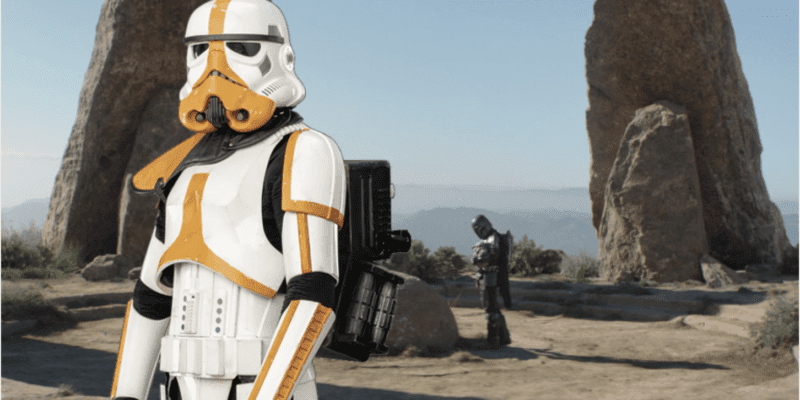 The latest installment of the hit Disney+ series The Mandalorian — Season 2, Episode 6 (Chapter 14: The Tragedy) — saw the return of Moff Gideon and, more importantly for our purposes here, his various stormtroopers.

One particular stormtrooper class (other than Gideon’s now-infamous darktroopers) caught Mandalorian fans’ eyes — these wore uniforms with distinct yellow stripes on both their helmets and body armor.

As it turns out, this special classification of stormtrooper is known as a “mortar stormtrooper” and they specialize, as you probably anticipated, in mortar weaponry.

ScreenRant also pointed out that, although mortar stormtroopers haven’t shown up in Star Wars canon previously, they do bear some similarities to existing incinerator troopers:

While these yellow-marked stormtroopers are a new addition to the roster, they are based on what has already been shown of how different types of stormtrooper units are denoted. Most notably, their yellow markings are exactly the same as the red markings of incinerator troops, who have also been shown in The Mandalorian, proving that this is indeed a purposeful similarity.

Once again, Mandalorian creator Jon Favreau and Dave Filoni have masterfully woven the Star Wars universe into their series, appealing to both old and new Star Wars fans simultaneously.

**SPOILERS for The Mandalorian Season 2, Episode 6 below.**

While we don’t know if the mortar stormtroopers will appear again in Season 2 of The Mandalorian, they played a key role in the Tython skirmish that ultimately allowed Gideon’s darktroopers to steal Grogu out from under the beskar armor of Din Djarin (Pedro Pascal) and Boba Fett (Temeura Morrison).

What do you think about Favreau’s new mortar stormtroopers?

Comments Off on Who – or What – Are the New Yellow Stormtroopers in ‘The Mandalorian’?