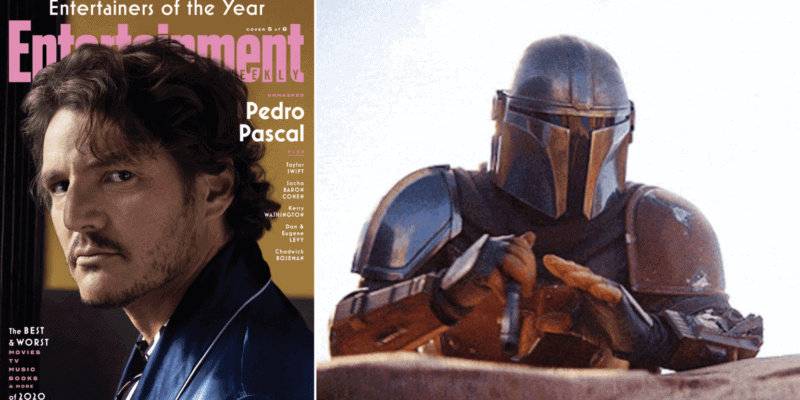 When Jon Favreau created The Mandalorian, he likely hoped — but probably never expected — that the Disney+ Star Wars series would enjoy the level of success it has.

The show is about 100 times more popular than the average U.S. TV series, has recently earned Disney+ its first Nielson Top 10 rating, and has spurred dozens of merchandise collections — and, of course, there are the memes.

While some might point to Grogu (AKA Baby Yoda AKA The Child AKA the cutest character in recent Star Wars memory) as the reason for the Mando craze, The Mandalorian’s human star, Pedro Pascal (Din Djarin), has also enjoyed his fair share of success.

Today, it was announced that Pascal has been named one of Entertainment Weekly’s Entertainers of the Year, alongside the likes of the late Black Panther star Chadwick Boseman, Kerry Washington, and more.

@PedroPascal1 is one of our 2020 #EntertainersOfTheYear! We have spoken. @TheMandalorian may hide his face but Pascal’s portrayal of the bounty hunter still shines, flying high in #StarWars’ epic TV adventure. https://bit.ly/2VndWY2 Story by @chancelloragard

.@PedroPascal1 is one of our 2020 #EntertainersOfTheYear! We have spoken. @TheMandalorian may hide his face but Pascal’s portrayal of the bounty hunter still shines, flying high in #StarWars’ epic TV adventure. https://t.co/MGoKis7jEr Story by @chancelloragard pic.twitter.com/fVhouLsQPO

Actor Giancarlo Esposito (Moff Gideon) has teased that four seasons of the show are currently planned — and that doesn’t count potential spin-offs, which are numerous. There have already been calls for Season 2 characters Cobb Vanth (Timothy Olyphant), Bo-Katan Kryze (Katee Sackhoff), and Ahsoka Tano (Rosario Dawson) to receive their own shows or mini-series.

As far as the sophomore season of The Mandalorian goes, fans are supposedly in for a “rollercoaster” of a finish in the final three episodes.

What do you think of Pedro Pascal being named an Entertainer of the Year?