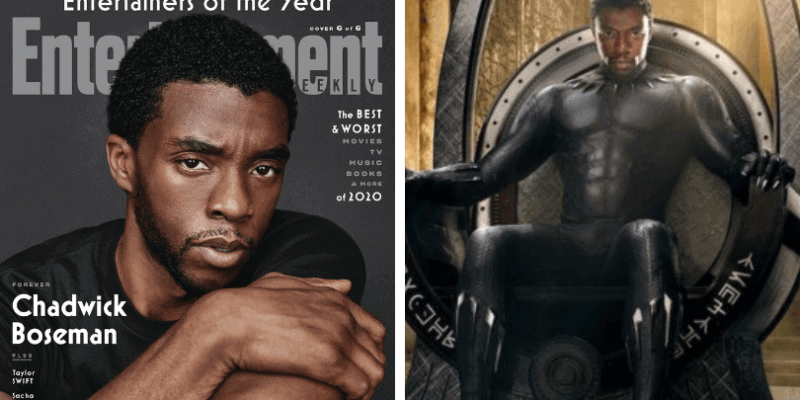 Entertainment Weekly revealed its list of 2020 Entertainers of the Year today, December 1, and included in the list was the late great Chadwick Boseman.

This is the latest tribute offered to the man who brought Black Panther‘s King T’Challa to life and lost his tragic battle with colon cancer. EW published a piece by best-selling author Angie Thomas. She wrote,

“You could tell he was dedicated to the craft of portraying each person. You could tell that he was genuinely invested in these stories and these people. But I think my favorite thing was you could see bits of him in every character that he played. You could see his loving, his kindness, his gentleness, his intelligence in every role — everything that’s good about him…

…To this day, if you talk to people about him and what it was like when they were filming, you hear nothing but great stories. The way he would go to restaurants that were just hole-in-the-wall spots, and he was just another person coming through. As much as he has made an impact on us through his art, one of the most beautiful parts of his legacy is the impact he made off screen. The way every person that I’ve spoken to who had any kind of contact with him speaks about him just blows me away, and it makes it hurt a bit more knowing the greatness of the loss.”

The announcement of Boseman as an Entertainer of the Year comes shortly after Marvel replaces the intro of Black Panther on Disney+ with a special tribute intro dedicated solely to the fallen king.

This writer was online and saw as the AP Flash of Chadwick Boseman’s death first dropped. It does not feel like it was almost four months ago. He will be greatly missed, and the Marvel Cinematic Universe will never feel the same.

But now we look to the future to see what Marvel will bring to the table with Shuri and Black Panther II.

Do you think Chadwick Boseman deserves to be recognized as an Entertainer of the Year? Why or why not? Let us know in the comments!