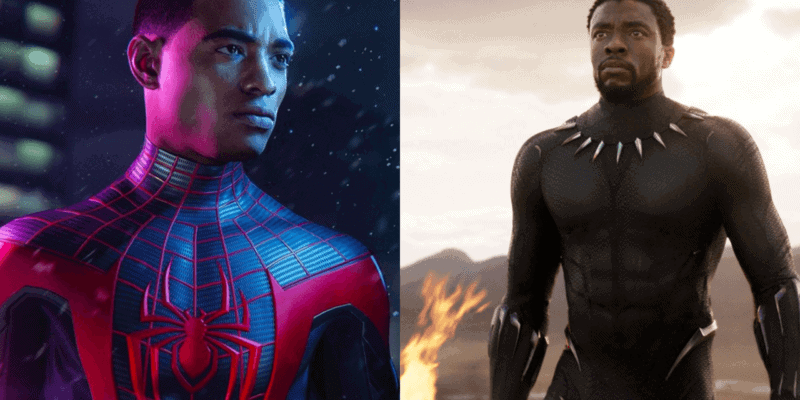 With the launch of the Playstation 5 over the last couple of weeks game the latest game in the Insomniac Games Spider-Man franchise. The new game continues the story from the first game but instead of focusing on Peter Parker, fans get to spend the entire game with Miles Morales who fans saw evolve into the next Spider-Man during the events of the first game.

There are so many Easter Eggs to other Marvel franchises dotted throughout the game but there have been a couple spotted by fans that pay tribute to the late Chadwick Boseman of Black Panther fame.

Related: Chadwick Boseman – A Tribute for a King’

The first tribute that was spotted was when the game ends and the credits begin. There’s a lovely worded message that reads:

In loving memory of a noble king, Chadwick Boseman.

His honor, strength, and compassion will reverberate for generations to come.

In addition to the credits tribute, fans have since spotted that Insomniac Games had changed the name of 42nd Street to read Boseman Way. The reason for this change comes from the significance of the number 42. Not only has the number been fairly significant in many Miles Morales outings (including the original comic and Spider-Man: Into the Spider-Verse) but also a reference to Jackie Robinson, the first black player to play in Major League Baseball. Film fans will remember that  Chadwick Boseman played Robinson in the film 42, his breakout role.

Related: Will the Spider-Verse Happen with Doctor Strange in Spider-Man 3?

Other Easter Eggs in the game include a Black Lives Matter suit and Mural alongside a Wakandan Flag.

Chadwick Boseman had such a huge positive impact on the world and we hope that fans continue to use his memory to help empower positive change.

Are you enjoying the new Spider-Man: Miles Morales video game? Let us know in the comments below.