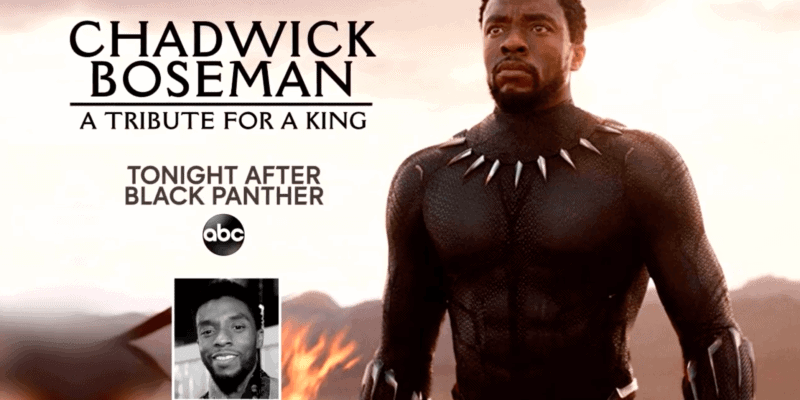 The Tributes Come Pouring In

And now, ABC is joining in on the tributes for the late actor as they just took to social media announcing a brand new ABC News Story special, which will air tonight, Sunday August 30. ABC writes:

Tonight, ABC will celebrate the legacy of Chadwick Boseman with a special presentation of Marvel Studios’ Black Panther followed by the ABC News Special: Chadwick Boseman – A Tribute for a King. It all starts tonight at 8|7c on ABC.

Tonight, ABC will celebrate the legacy of Chadwick Boseman with a special presentation of Marvel Studios’ Black Panther…

TBS, the popular television channel, is also joining the tributes as they have announced the company will air Black Panther in honor of Chadwick Boseman. The popular, record-breaking film, will air on TBS tonight, Sunday August 30, from 8 PM to 11 PM in both timezones.

Actor Chadwick Boseman has been battling colon cancer for the last four years during the production of Black Panther, Avengers: Infinity War and Avengers: End Game as well as other non-related Marvel films such as Da 5 Bloods, 21 Bridges, and Ma Rainey’s Black Bottom. The death of Boseman as well as the news of him battling colon cancer came to a shock to media and his fans as his diagnosis was kept a secret.

Our thoughts and prayers go out to the Boseman family. Rest in Peace, Chadwick.

Will you be tuning into this ABC special? Let us know in the comments below.

Comments Off on ABC To Air News Special: ‘Chadwick Boseman – A Tribute for a King’