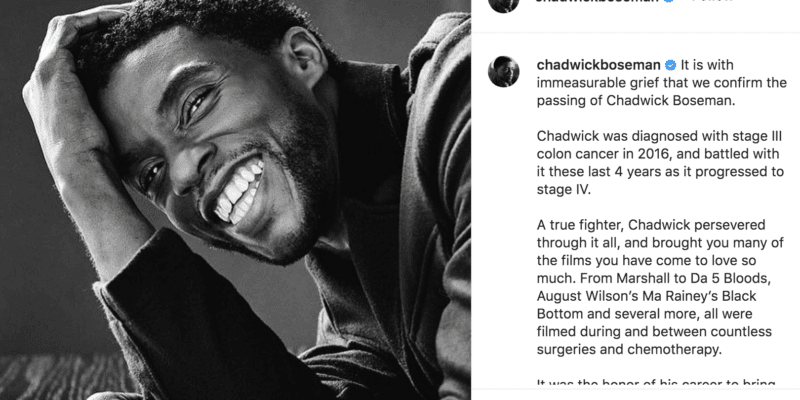 While we still try to wrap our heads around the tragic loss of Chadwick Boseman this evening, the outpour of sorrow from Hollywood is undeniable. The amount of comments and posts all over social media discussing the terrible loss is growing by the second, and both Disney and Marvel are sharing a united front on the loss.

Both companies released the same post and photo sharing that:

“Our hearts are broken and our thoughts are with Chadwick Boseman’s family. Your legacy will live on forever. Rest In Peace.”

The simplistic nature in each post says it all. It seems that Disney and the Marvel universe are both at a loss of words like the rest of us. Boseman leave’s a legacy in the MCU as King T’Challa, and the Walt Disney Studios acknowledges that.

Our hearts are broken and our thoughts are with Chadwick Boseman’s family. Your legacy will live on forever. Rest In Peace. pic.twitter.com/1FjjfWT6jn

Our hearts are broken and our thoughts are with Chadwick Boseman’s family. Your legacy will live on forever. Rest In Peace. pic.twitter.com/DyibBLoBxz

Responses from Co-Stars and Friends

The amount of messages being posted to both Twitter and Instagram about the death of Chadwick Boseman is endless, but with the posting on Chadwick’s official Instagram account, the comments filled instantly. Continue below to see what some of Chadwick’s co-stars and friends have to say about his passing.

It is with immeasurable grief that we confirm the passing of Chadwick Boseman.⁣ ⁣ Chadwick was diagnosed with stage III colon cancer in 2016, and battled with it these last 4 years as it progressed to stage IV. ⁣ ⁣ A true fighter, Chadwick persevered through it all, and brought you many of the films you have come to love so much. From Marshall to Da 5 Bloods, August Wilson’s Ma Rainey’s Black Bottom and several more, all were filmed during and between countless surgeries and chemotherapy. ⁣ ⁣ It was the honor of his career to bring King T’Challa to life in Black Panther. ⁣ ⁣ He died in his home, with his wife and family by his side. ⁣ ⁣ The family thanks you for your love and prayers, and asks that you continue to respect their privacy during this difficult time. ⁣ ⁣ Photo Credit: @samjonespictures

Chris Pratt: “This is such devastating news. We’re praying for his family. The world has lost an immeasurable talent and a great person.”

Octavia Spencer: “We’ve lost a great one. My heart is truly broken. #ChadwickBoseman.”

Zoe Saldana: “The classiest avenger and most quiet warrior. My heart is heavy right now. I wished I had the courage to tell you how your performance of T’Challa was the best portrayal of a King I had ever seen. Rest in Power and Grace Brother. My sons will know your name forever!”

Mark Ruffalo: “All I have to say is the tragedies amassing this year have only been made more profound by the loss of #ChadwickBoseman. What a man, and what an immense talent. Brother, you were one of the all time greats and your greatness was only beginning. Lord love ya. Rest in power, King.”

Brie Larson: “Chadwick was someone who radiated power and peace. Who stood for so much more than himself. Who took the time to really see how you were doing and gave words of encouragement when you felt unsure. I’m honored to have the memories I have. The conversations, the laughter. My heart is with you and your family. You will be missed and never forgotten. Rest in power and peace my friend.”

Mr. Boseman leveled the playing field while fighting for his life… That’s heroism. I’ll remember the good times, the laughter, and the way he changed the game… #chadwickforever @chadwickboseman pic.twitter.com/IFfCSmLrhR

Joe Biden even added: The true power of @ChadwickBoseman was bigger than anything we saw on screen. From the Black Panther to Jackie Robinson, he inspired generations and showed them they can be anything they want — even super heroes. Jill and I are praying for his loved ones at this difficult time.”

And the list of heartbreaking comments continues to go on and on. To see more responses, head to Chadwick’s Instagram.

Chadwick was diagnosed with stage III colon cancer in 2016, and battled with it these last 4 years as it progressed to stage IV. The sickness may be the reason the second film of the Black Panther franchise was pushed back to 2022. ⁣He filmed and created an icon of a superhero while he was fighting for his life himself. His perseverance, and iconic performance and character of Black Panther, will never be forgotten.

What were some of your favorite moments from The Black Panther? Let’s keep that conversation going below.