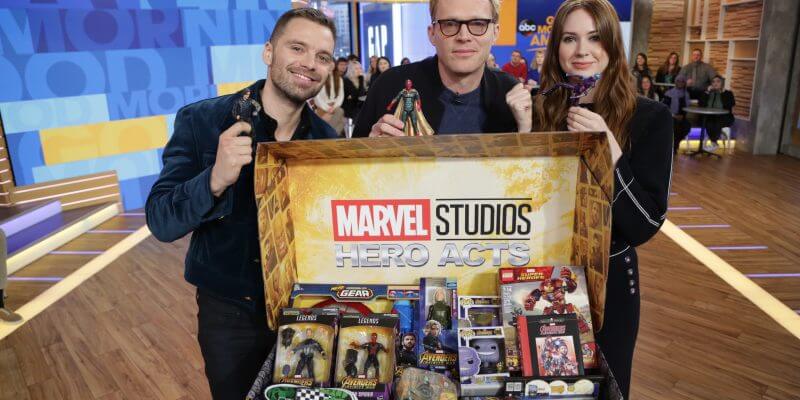 The Walt Disney Company announced Marvel: The Universe Unites, an epic charity campaign for children that uses the combined superpowers of the “Avengers: Infinity War” cast.

During the week-long event, stars of the movie team up for a series of heroic acts and social media challenges to raise funds and awareness for charities that support children and families impacted by serious illness. The initiative culminates the weekend of March 3 when shopDisney.com and Disney stores in the U.S. donate 10% of sales of all Marvel products made between March 3-4, 2018 (up to $50,000) to Make-A-Wish to help grant life-changing wishes for children with critical illnesses.

As part of Marvel Studios: Hero Acts, a charitable initiative launched in 2016, some members of the cast of “Avengers: Infinity War“ will receive a special toy care package filled with new products celebrating their Marvel character to be donated to children’s hospitals. The stars then reveal the new toys through a creative photo or video posted to their Facebook, Instagram, or Twitter accounts using #HeroActs. When their collective posts hit a million likes, they unlock a $250,000 US donation to Starlight Children’s Foundation from Marvel. “This movie has one of the greatest ensemble casts of all time, and we are challenging them to use their collective might to benefit children’s charities,” said Jimmy Pitaro, Chairman, Disney Consumer Products and Interactive Media. “We’re kicking off by inviting some of the world’s biggest stars to get creative on social media to support Starlight Children’s Foundation, a charity that works to bring joy and comfort to hospitalized children and their families.”

Marvel partners are also supporting the initiative with their own #HeroActs. Hasbro is donating $1 million worth of cash and products to Give Kids the World, an organization that fulfills the wishes of children with critical illnesses and their families by providing them with an unforgettable trip, which includes a visit to their village in Central Florida and access to Walt Disney World Resort.

Funko is also making a $1 million toy donation to Starlight Children’s Foundation as part of the Marvel: The Universe Unites campaign.

“From our fantastic cast to our toy and retail partners, it’s great to see the Marvel Cinematic Universe come together in this way to support children’s charities,” comments Kevin Feige, President, Marvel Studios. “The launch of the products for “Avengers: Infinity War” is a fun way for fans to celebrate the countdown to the movie, and this initiative underscores that moment in a really special way.”