Baby Yoda Cereal Coming to Wal-Mart & Sam's Club This Summer! - Inside the Magic 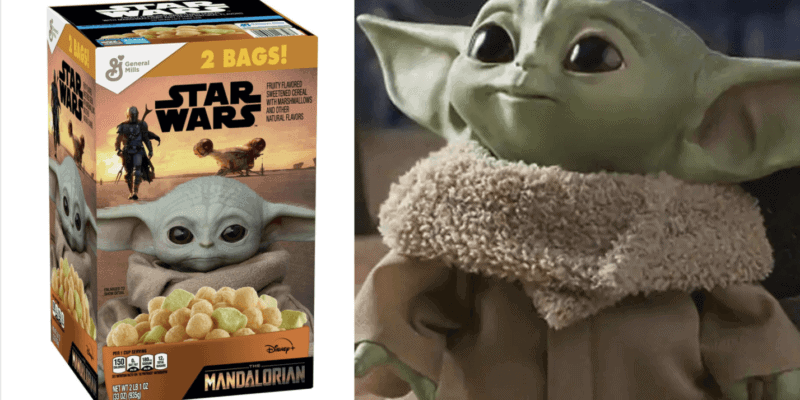 If you live in America, you probably shop at Wal-Mart or Sam’s Club (or both!) for many of your home’s grocery and household necessities. Now, there’s even more reason to visit one of the stores started by Sam Walton: Baby Yoda cereal.

On Star Wars Day 2020 (May 4), General Mills announced that they would be bringing Baby Yoda cereal to store shelves later in the year. The well-known food company will be rebranding its existing Star Wars cereal to feature The Child.

General Mills’s iconic Fruit Roll-Up snack will also be receiving a Baby Yoda makeover ahead of the premiere of The Mandalorian Season 2 in October.

All Sam’s Club stores throughout America will start selling a box that contains two bags of Baby Yoda cereal in late-July (that’s this month!). The Star Wars cereal two-pack will be priced at $5.98.

Single boxes of cereal will hit Walmart shelves in August. Pricing is not yet available.

The Mandalorian-inspired cereal will feature sweetened corn puffs and marshmallows shaped like Baby Yoda. Make sure you stock-up on multiple boxes of Star Wars cereal before it’s gone! It will only be available for a limited time.

If you’re as excited as this writer for the second season of The Mandalorian, you’re probably chomping at the bit for all of the news tidbits you can get.

Right now, Jon Favreau, Pedro Pascal, and co. haven’t told us much about the sophomore season’s storyline, but we do know the darksaber (which has made its way to Moff Gideon) will play a big role. We also know that Ahsoka Tano (Rosario Dawson), Bo-Katan Kryze (Katee Sackhoff), and other characters from Star Wars: The Clone Wars will be making their first live-action appearances.

How many boxes of limited edition Baby Yoda cereal are you planning to purchase? We’re sure Star Wars fans are going to go bonkers for the cereal box featuring the adorable alien!

Comments Off on Baby Yoda Cereal Coming to Wal-Mart & Sam’s Club This Summer!