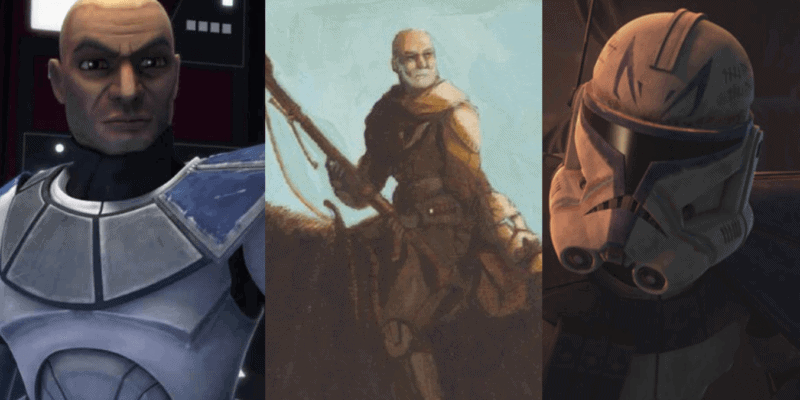 Dave Filoni, former Supervising Director of Star Wars: The Clone Wars and current  executive producer of Star Wars Rebels, recently changed his Twitter banner to a teaser for the second season of The Mandalorian.

Filoni’s social media graphic features Ahsoka Tano, Luke Skywalker’s padawan, riding alongside a character who looks very much like Clone Captain Rex (Dee Bradley Baker). It certainly appears that Filoni is teasing an appearance by a second Clone Wars’ character. Captain Rex was the renowned commander of the Grand Army of the Republic’s Torrent Company in the 501st Legion during the Clone Wars.

It was recently confirmed that Rosario Dawson will be playing Clone Wars’ favorite Ahsoka Tano in The Mandalorian Season 2. The team behind the hit Disney+ Star Wars series also announced the addition of Aliens’ actor, Michael Biehn, as a yet-unnamed bounty hunter.

Since Captain Rex is known for his unquestioning loyalty to his Jedi Generals, it makes sense for his storyline to intersect with Ahsoka Tano’s in The Mandalorian.  At a panel at Celebration Orlando 2017, Filoni seemingly confirmed that Captain Rex is visible during the battle on Endor in 1983’s Star Wars film, Return of the Jedi.

In the Star Wars saga timeline, The Mandalorian falls just a few years after Return of the Jedi. From a timing perspective, therefore, it makes sense that Din Djarin and The Child (AKA Baby Yoda) could somehow get involved with the soldier during their journey to find The Child’s home planet.

Filoni and showrunner Jon Favreau have been famously tight-lipped about The Mandalorian, so nearly all we know is what was laid out in the Season 1 finale. Currently, Season 2 is in post-production and is set to premiere on Disney+  in October.

As of yet, there have been no rumors about who could portray Captain Rex in The Mandalorian. Share your thoughts about this The Mandalorian development in the comments!