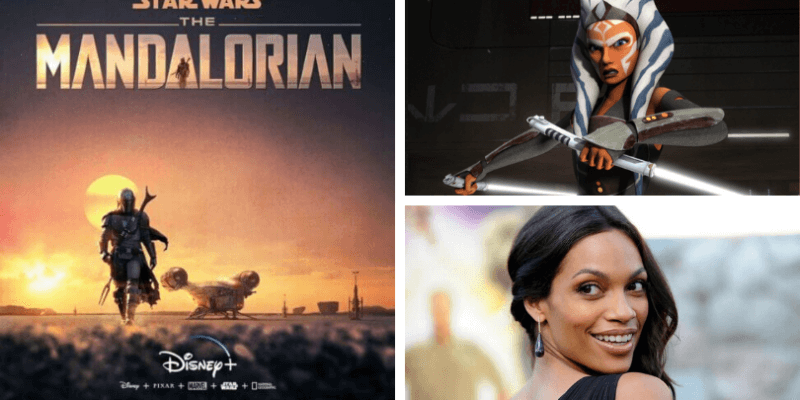 Ahsoka Tano is, undoubtedly, one of the most beloved Star Wars characters in recent years. Since she was first introduced to us in Lucasfilm’s animated series, Star Wars: The Clone Wars, the young padawan quickly took the spotlight and stole our hearts as she became a veteran in the clone wars, left the Jedi Order and grew into her awesome Force-wielding self.

But beyond a few quick little voiceover lines at the end of Star Wars: The Rise of Skywalker, Ahsoka has yet to be shown outside the animated medium. That is, until now. It is being reported that Ahsoka Tano will make an appearance in season two of Disney+’s blockbuster series, The Mandalorian, and she will be played by the actress Rosario Dawson.

While this story is making the rounds online, we at Inside the Magic want to clarify that nobody at Disney or Lucasfilm has come out to confirm this story being broken on /Film, and, therefore, should be taken with excitement but also a little grain of salt.

While Rosario Dawson has made it clear she wants to play the role, it does make sense for Ahsoka Tano to appear in another Star Wars TV series. Her co-creator, Dave Filoni, works closely with Jon Favreau on The Mandalorian, and more details about her story within the Skywalker Saga is in large demand. Not only is there a huge gap in her story from where Clone Wars leaves off and Star Wars: Rebels begins, but we also have no idea what happens to her afterward. Spoiler Alert: She survives her confrontation with Darth Vader.

We know that The Mandalorian‘s second season will bring about more of our old characters, and we will learn more about the period of time between Return of the Jedi and The Force Awakens just as Clone Wars showed us the time between Attack of the Clones and Revenge of the Sith, and Star Wars: Rebels shed light on the time period between Revenge of the Sith and A New Hope. We also know that a major part of this series is going to be “Mando” finding more Jedi to take in The Child/Baby Yoda and even though Ahsoka refuses to call herself a Jedi, she has a hard time escaping her destiny to be a master of sorts.

With all of this in mind, it only makes sense that Ahsoka makes an appearance at some point. But, right now, only time will tell. Season Two of The Mandalorian is currently in production. Its release date on Disney+ is still scheduled for this October.

Comments Off on Ahsoka Tano Will Appear in “The Mandalorian” Season 2, Rosario Dawson Cast for the Role