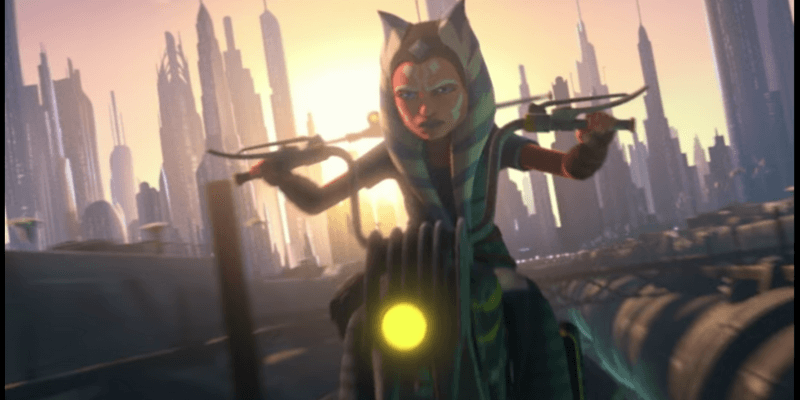 More good news from the realm of Disney+, Disniacs and Star Wars fans! Our favorite renegade force-wielder, Ahsoka Tano, will finally return in this week’s episode of Star Wars: The Clone Wars.

Now, don’t get us wrong, we’re not disappointed we had to wait. The first four episodes of The Clone Wars final season provided plenty of excitement and more than a few laughs. We were introduced to the Bad Batch–our new favorite clone squad–we got to explore more of Captain Rex’s character as he brings back his brother in arms, echo, and we see a very Revenge of the Sith style Anakin.

But now, we’re going to cut away from the front lines of the war to catch up with Ahsoka. The last time we saw her, she turned in her lightsabers and walked away from the Jedi order. Now we will see her in Coruscant’s underworld teaming up with sisters Trace and Rafa Martez. But Ahsoka appears to be keeping her Jedi past a secret. She is also still without her lightsabers. It will be interesting to see how she struggles to keep her secret while also build the trust of her new friends.

You can watch the full episode trailer here:

A hero returns this Friday. The final season of Star Wars: The Clone Wars continues, streaming only on Disney+.

Right now, there is a huge gap in Ahsoka Tano’s story if we are going strictly by the TV shows. And considering how Disney likes to cherry-pick plot points from books and other pieces of former canon, the TV shows are the dominating source right now. We saw her leave the Jedi Order shamed and dishonored, then we see her return in Star Wars Rebels as an adult with two new lightsabers and still practicing the ways of the force. Struggling with her identity, refusing to call herself a Jedi.

We have yet to truly see what sets her off on that rebellious path, and there is no doubt that her story will be one of the most exciting to watch this season.

Are you excited to see Ahsoka Tano return? How do you feel about Lucasfilm and Disney waiting until episode 5 to bring her back? Let us know in the comments!

Comments Off on Ahsoka Tano Finally Returns in This Week’s Episode of “Star Wars: The Clone Wars”