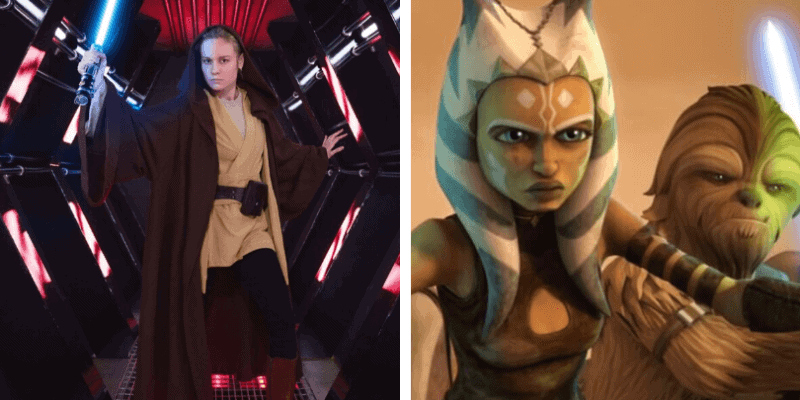 Back in September, we learned that Marvel’s Kevin Feige is developing an all-new  Star Wars movie, and he apparently already had an actress in mind for a starring role. Now, we’re hearing reports that Brie Larson could play Ahsoka Tano in Feige’s  Star Wars film.

We already suspected that Larson — known for her prominent role as Captain Marvel in the Marvel Cinematic Universe — might be in Feige’s new movie. Ever since Lucasfilm’s Kathleen Kennedy announced that Feige would be taking on a new Star Wars film project, fans worldwide speculated that Larson was going to have a role. The actress is a self-proclaimed huge Star Wars fan, and she even responded to rumors of her starring in Feige’s new movie by sharing photos of herself all decked out in Jedi garb on Twitter.

Now, We Got This Covered reports that Ahsoka Tano might be featured in Feige’s film. Long-time fans of the Star Wars universe will know Ahsoka from her protagonist role in Star Wars: The Clone Wars, her appearance in  Star Wars: Rebels, and of course her novel,  Star Wars: Ahsoka. She was introduced as the Padawan apprentice of Anakin Skywalker and has since grown to be well known as a strong female character in the  Star Wars franchise.

When you think of strong female characters that Disney has their hand in bringing to life, who most recently comes to mind? Probably Captain Marvel. So if Larson is already used to playing a strong female protagonist, why wouldn’t she want to play Ahsoka?

Keep in mind that at the time of this article’s publication, this is only speculation, and nothing has been confirmed yet. Feige’s new  Star Wars movie has been kept under wraps, and we know next to nothing about it. But clearly, the internet is buzzing with excitement and anticipation for what the Marvel Studios head honcho will come out with next.

What do you think of the possibility of Brie Larson starring as Ahsoka Tano in Kevin Feige’s upcoming  Star Wars movie? Let us know in the comments!