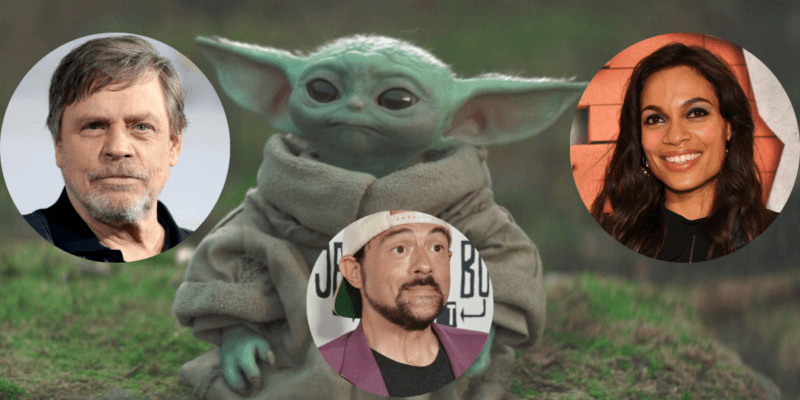 The Season 2 finale of Star Wars: The Mandalorian dropped on Disney+ yesterday, Friday, December 18, and shook the Star Wars fandom to its core.

Last night, we published an article highlighting how fans sent their utmost gratitude to showrunners Jon Favreau–the initial creator–and Dave Filoni–executive producer and Star Wars: The Clone Wars creator–on Twitter. And, yes, we made sure to keep the article free of all spoilers.

While many fans were thanking Favreau and Filoni for creating The Mandalorian in its entirety, most tweets of praise and gratitude were regarding the epic season finale, “Chapter 16: The Rescue.” And it appears that die-hard fans were not the only ones to have an intense reaction to the episode.

Both Kevin Smith and Mark Hamill both shared their reactions to the conclusion, especially Luke Skywalker’s CGI cameo.

While a celebrity in his own right, Kevin Smith is as much a hardcore Star Wars fan as anyone and also took to Twitter yesterday to share his reaction when he watched the episode on Friday morning.

The filmmaker shared a picture of red eyes and wrote,

“Way too early to bawl my eyes out but holy Sith, that @themandalorian season finale was like watching my life flash before my eyes! @Jon_Favreau has the biggest balls in the business with that incredible third act flex! Easily the most positively surprising moment of 2020 for me,”

Way too early to bawl my eyes out but holy Sith, that @themandalorian season finale was like watching my life flash before my eyes! @Jon_Favreau has the biggest balls in the business with that incredible third act flex! Easily the most positively surprising moment of 2020 for me! pic.twitter.com/3kdTKgFp2S

Mark Hamill, on the other hand, took a less direct approach. The Star Wars legend–obviously knowing that his younger self was going to make an appearance with R2-D2–simply asked the question, “Seen anything good on TV lately?”

Seen anything good on TV lately?

Let’s take a quick look at how some fans’ replies to his clearly sarcastic question:

Ahsoka Tano actress, Rosario Dawson, also shared her reaction on Instagram and used a video of the show’s lead actor Pedro Pascal to convey her emotions.

“Season 2 finale of @themandalorian got me like… I cannot stop talking about it @starwars @disneyplus.”

Rosario is set to reprise her live-action portrayal of the fan-favorite character in the Mandalorian spinoff series, Ahsoka, next year.

Star Wars: The Mandalorian launched on Disney+ on November 12, 2019, and was an instant success. Expanding George Lucas’ Star Wars universe in the days following Star Wars: Episode VI – Return of the Jedi (1983), we were introduced to Din Djarin (Pascal), Grogu (AKA “The Child” or “Baby Yoda”), Moff Gideon (Giancarlo Esposito), and Cara Dune (Gina Carano), not to mention Disney+ earned its first Emmy Award thanks to the hit series.

From the reactions of these fans and scores more not shared here, it is clear that Favreau, Filoni, Bryce Dallas-Howard, and the entire production team were able to not only follow the first season but take the show to even higher heights in the second season by bringing back Boba Fett (Temuera Morrison), and introducing characters like Ahsoka Tano (Dawson) and Bo-Katan Kryze (Katee Sackhoff) into the live-action realm of the Star Wars universe.

It has been speculated by many–including us here at Inside the Magic–that Luke Skywalker was going to appear in Lucasfilm’s first long-form streaming series, but that he would be recast as the young-Hamill lookalike, Sebastian Stan (AKA Marvel’s Winter Soldier). We now see that the technology has advanced so far that Mark Hamill himself was able to reprise his role once again — at least, with his face and voice. The credits show actor Max Lloyd-Jones served as the actual Jedi stand-in.

The final episode, “Chapter 16: The Rescue” is available for streaming now on Disney+. The third season of The Mandalorian is scheduled to be released around Christmas 2021.