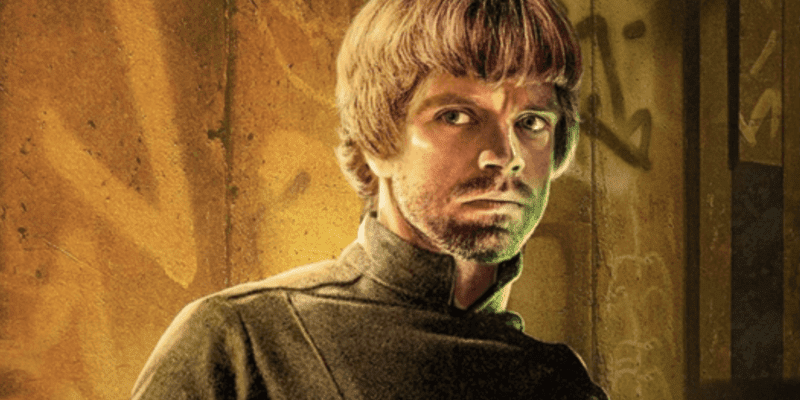 If you’re one of the many Sebastian Stan fans who has been calling for the actor to play Luke Skywalker in a Star Wars series or movie, your day might be coming.

Instagram user Ryan Smallman even created this The Mandalorian style poster featuring his incredible depiction of Stan as the iconic Jedi.

For months, Star Wars fans online have been pointing out the striking resemblance between Mark Hamill as young Luke Skywalker in the original trilogy — Star Wars: Episode IV – A New Hope (1977), Star Wars: Episode V – The Empire Strikes Back (1980), and Star Wars: Episode VI – The Return of the Jedi (1983) — and Stan, who is currently playing Bucky Barnes/Winter Soldier and filming Marvel’s The Falcon and the Winter Solider series, set to release on Disney+ next year.

As it turns out, there could actually be three — if not four — upcoming chances for Stan to potentially portray Luke Skywalker.

First — as the fan poster featured above indicates — Stan could theoretically appear in The Mandalorian alongside Din Djarin (Pedro Pascal) and Grogu (AKA The Child AKA Baby Yoda). One theory, in fact, suggests Skywalker has already met Grogu. This actually isn’t too far-fetched since the duo are both incredibly Force sensitive and it seems highly unlikely that a being as powerful as Grogu could exist in the galaxy without Skywalker sensing his presence.

When Mark Hamill first played Luke Skywalker in A New Hope in 1977, he was 26-years-old. Sebastian Stan is currently 38-years-old. Star Wars timeline-wise, this works in relation to The Mandalorian — the hit Jon Favreau and Dave Filoni Disney+ show takes place approximately five years after the Empire is defeated in Return of the Jedi, meaning Stan’s appearance is probably very close to what Skywalker’s would be in The Mandalorian Season 3 or Season 4 .

The second series in which we could see Stan play Skywalker is Ahsoka, the upcoming Mandalorian spinoff featuring Jedi Ahsoka Tano (Rosario Dawson) — a fan-favorite character who originally appeared in Star Wars: The Clone Wars and Star Wars Rebels. Ahsoka was Anakin Skywalker’s Padawan, so it serves to reason that she might cross paths with Luke at some point — this would be showrunner Favreau and executive producer Filoni’s brand of fan service at its finest, as a matter of fact.

The third option is the second Mandalorian spinoff announced by Lucasfilm President Kathleen Kennedy at Disney’s December 10 Investor Day streaming event. Titled Rangers of the New Republic, little is known about this spinoff yet — though some reports indicate it could feature Cara Dune (Gina Carano). It seems less likely that Skywalker would show-up in Rangers than in Ahsoka, but we know the trio of series are set to be interconnected, so anything could happen.

Finally, as ScreenRant points out, Stan could ultimately be cast in the next Star Wars movie. Star Wars: Rogue Squadron (2023) is set to be directed by Patty Jenkins and an as-yet unnamed screenwriter — some fans believe Rian Johnson could be behind the script of the upcoming Star Wars film:

In Rogue Squadron, Stan could take on the character of Luke in a proper leading role. In canon, Luke is the founder of Rogue Squadron and its commander for several years, up through the Battle of Hoth. While no official timeline or story details have been confirmed for the movie yet, it’s likely that Rogue Squadron will at least partially focus on the origins of the eponymous X-wing squad and tie into the story of Rogue One. If that’s the case, Luke [young Luke] should be a major player.

On the other hand, there’s no guarantee that Stan will play Luke Skywalker at all. Disney could keep producing Star Wars content that references but never shows Skywalker, leaving Hamill as the lone vanguard of the role.

Where do you fall in all of this? Are you a Star Wars fan who thinks Sebastian Stan should have a chance to capitalize on his uncanny resemblance to young Hamill wield Luke Skywalker‘s lightsaber — a la Alden Ehrenreich’s portrayal of Han Solo in Solo: A Star Wars Story (2018)? Or, should the Chosen One remain a role played by Hamill alone?