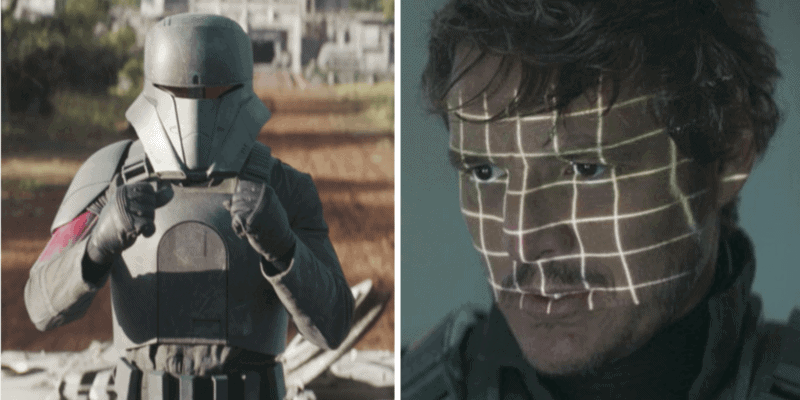 For the entirety of the second season of The Mandalorian — which culminates this week with Chapter 16 of the hit series streaming on Disney+ — we’ve been watching Din Djarin’s (Pedro Pascal) armor slowly crack, figuratively speaking.

Warning: This article contains spoilers for key plot points from multiple episodes of The Mandalorian.

From the moment Djarin meets Bo-Katan Kryze (Katee Sackhoff) for the first time in Season 2, Episode 3 (Chapter 11: The Heiress) — and she immediately takes off her helmet — viewers are taken on Djarin’s journey to discovering who he really is.

This season, he has transformed from a stoic warrior, so rooted in the “Way of the Mandalore” doctrine he can’t see the forest for the trees, to a deep, meaningful character within the Star Wars universe. As Djarin has become increasingly attached to Grogu (AKA The Child AKA Baby Yoda), we’ve seen his attachment to “the Way” lessen — not in a manner that insinuates it is any less important to him than it previously was, but in a fashion that indicates he is growing and discovering that there is more to life than beskar.

Grogu has, in essence, filled a hole in Djarin’s life that was previously filled by Mandalorian armor. Our title Mandalorian believed the only way to be honorable was to stick to “the Way” — now, he is finding that honor sometimes dictates changing his point-of-view.

But, the question of the week remains — Did Din Djarin actually break “the Way of the Mandlore” when he removed the stormtrooper helmet he was wearing at the Imperial base? Maybe not.

Here’s what “the Way of the Mandalore” actually says.

This is helpful in understanding why Djarin was so distrustful of Bo-Katan and her fellow Mandalorians when he first met them.

Despite his seemingly strict adherence to “the Way,” we’ve actually seen Djarin bend the rules before his face scan in Chapter 15: The Believer. For instance, he allows IG-11 (voiced by Taika Waititi) to apply bacta spray to his face during the Season 1 finale — Chapter 8: Redemption — because the droid is not, technically speaking, a living being.

ScreenRant points this out about the stormtrooper helmet removal:

Interestingly, following the letter of the law, Mando may not have actually broken any rules in the Mandalorian Creed by removing his stormtrooper helmet in front of Valin Hess, Mayfeld, and the other Imperial forces at the refinery on Morak…

…Mando privately changed into the stormtrooper disguise, and when he unmasked he was removing a helmet, but not his helmet.

This is one-hundred-percent an example of bending Mandalorian beliefs to their absolute max, but, if the question is, “Did Din Djarin actually break ‘the Way’ when he removed his stormtrooper helmet?” the answer is, “Probably not.”

At the end of the day, the most important takeaway from the penultimate episode of the second season of The Mandalorian is that Djarin is going through a major growth spurt from an emotional and psychological standpoint — the actual helmet removal is secondary to what’s happening inside of our bounty hunter hero.

Season 3 is set to premiere in December 2021, alongside two spinoffs that will be set concurrently within the Star Wars galaxy. The first, Ahsoka, will feature Star Wars: The Clone Wars and Star Wars Rebels fan-favorite, Ahsoka Tano (Rosario Dawson). The second, Rangers of the New Republic, has not yet been outlined in great detail.

What are your thoughts? Do you hope Din Djarin starts taking his helmet off more frequently in future seasons of the Star Wars streaming show or even in a Star Wars movie?