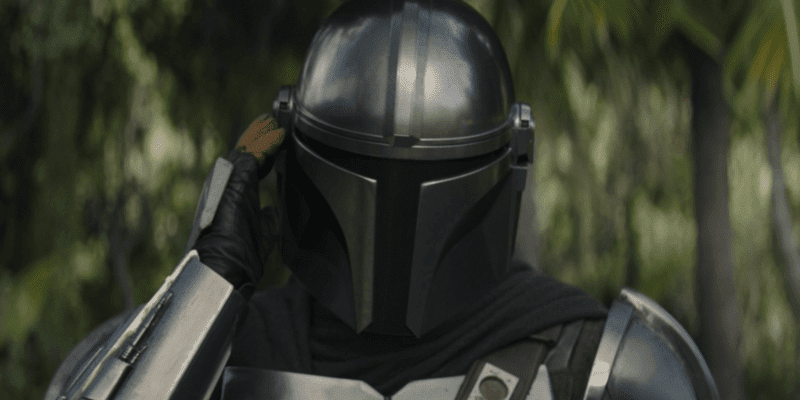 **SPOILERS AHEAD For The Mandalorian Season 2, Episode 7 (Chapter 15: The Believer)**

In this week’s penultimate episode of the second season of The Mandalorian — Episode 7 (Chapter 15: The Believer) — we saw Din Djarin (Pedro Pascal) doing what he does best — kicking butt and taking names. However, this time, he’s wearing a stormtrooper helmet instead of his beskar armor (all in the name of saving Grogu from Moff Gideon, of course).

Related: Is Gina Carano’s Cara Dune Getting Her Spinoff With ‘Rangers of the New Republic’?

The action sequences in this installment of Jon Favreau and Dave Filoni’s hit Star Wars series are critical — they set up the fact that there’s more to Djarin than immediately meets the eye. Yes, he’s a Mandalorian. Yes, he’s a skilled warrior. Yes, his Mandalorian armor is an important aspect of his identity.

But, he’s also so much more.

At one point during the episode, Mayfield — the prisoner New Republic Marshal Cara Dune (Gina Carano) helps Djarin break out in order to track down Gideon’s coordinates — questions the Mandalorian’s convictions after he says he’ll change into stormtrooper armor in a bid to get Grogu back, yet asserts “but I won’t show my face”:

Sounding like Bill Burr [the stand-up comedian and actor who plays Mayfield] again, Mayfeld asks the Mandalorian if his religion says he can’t remove his helmet or just can’t show his face. “There is a difference,” he says.

At this point in the episode, we can almost see the wheels start turning in Djarin’s mind. He gets quiet — quieter than usual, even — and is clearly processing Mayfield’s surprisingly valid point. After all, if he is already willing to remove his beskar helmet and impersonate an Imperial stormtrooper to save Grogu, hasn’t he already broken the Mandalorian Creed he holds so dear?

Related: OpEd: Grogu, Force Wielders Should Leave Jedi/Sith Behind in ‘The Mandalorian’

The entire season has been building to this point — there’s been a “slow burn,” if you will, taking viewers to the moment in which Djarin will finally remove his helmet in order to save The Child. This “slow burn” reaches an excruciating level in Chapter 15 — one knows he is going to decide to take the helmet off, to reassess his entire belief system, but exactly when remains in question for most of the installment.

The fact that the helmet removal has been such a long time coming is absolutely essential to the plot — and, ultimately, the overwhelming success — of The Mandalorian. Favreau and Filoni have done something Star Wars fans haven’t seen in far too long — they’ve given us a character we can all connect with and grow alongside.

This is what keeps us coming back for more every week — and every year. Season 3 will debut on Christmas Day 2021 and reports of Season 4 run rampant.

Djarin’s struggle to grapple with his personal view of the Mandalorian Creed — particularly after meeting Star Wars: The Clone Wars and Star Wars Rebels character Bo-Katan Kryze (Katee Sackhoff) and discovering that some Mandalorian sects do, in fact, take off their helmets — has been a major undercurrent of the entirety of Season 2 and we’ve been there every step of the way.

On the Imperial base, when it becomes apparent that Mayfield will be unable to obtain the coordinates our unlikely band of heroes need to save the foundling, Djarin takes matters into his own hands. We see the moment he finally realizes that there is something more important than his Creed — and that something is “his” child, Grogu.

This is the first time we’ve seen Djarin repeatedly call “the kid” “his,” and this too, marks a shift in his outlook as we head into the Season 2 finale next week. He is discovering that the Mandalorian helmet isn’t the only thing that makes him a true Mandalorian — perhaps, sometimes, as Djarin learned in this episode, having honor actually means questioning everything you thought you knew.

Now that Djarin has finally determined there’s more to life than the Creed, there’s no telling exactly how far he’ll go to get Grogu back safe and sound — with the help of Boba Fett (Temuera Morrison), Cara Dune, and Fennec Shand (Ming-Na-Wen) — and, if you’re anything like us, you can’t wait for the final Darksaber vs. beskar spear battle.

What are your thoughts on The Mandalorian Season 2, Episode 7? Will we see more Pedro Pascal without his helmet in the future?