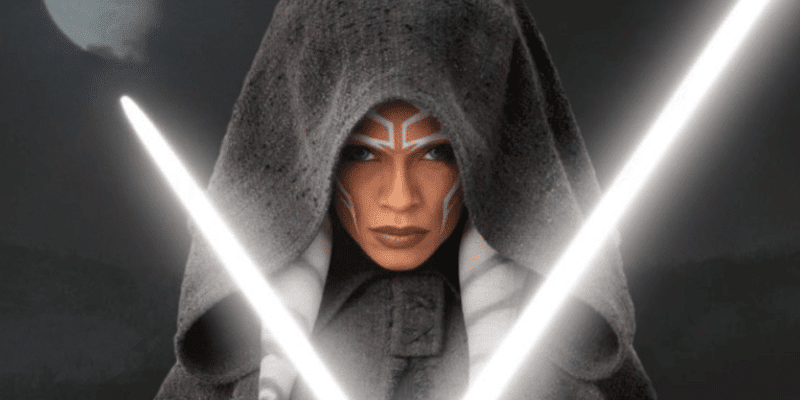 Her portrayal of the fan-favorite Jedi was well-received across the board by Star Wars fans online — and this is not an easy thing to accomplish within the notoriously fickle fandom and speaks to how impressive Dawson’s performance was.

Before her Mandalorian installment — Season 2, Episode 5 (Chapter 13: The Jedi) — aired, Dawson sat down with StarWars.com to share thoughts about being cast as Ahsoka.

She began by telling the website, ““I think it definitely was the Force at work.”

The article goes on to explain:

In February 2017, a Star Wars fan tweeted at Dawson, asking if she would ever want to play the fan-favorite Jedi…To the surprise of pretty much everyone, Dawson responded emphatically. “Ummmm… yes please?! #AhsokaLives #AhsokaTano #StarWars.” The Internet noticed, causing a stir in the fan community about the possibility of Ahsoka making the jump to live-action; Dawson’s enthusiasm only added to the excitement.

“I think someone who always does the press for Star Wars saw it and forwarded it to [Ahsoka creator and The Mandalorian executive producer] Dave Filoni, who said, ‘Interesting. Yeah. She looks like she could be her. That’s cool,’ and then followed me,” Dawson says. “They ended up having the Star Wars account follow me. And that became a whole thing. Like, ‘Wait, did something just happen?’ And I got really excited. ‘Wait, did something just happen?’ And then nothing happened. [Laughs] Nothing happened for a very long time.”

Eventually, of course, the stars aligned and Dawson got her chance play a pivotal role in a galaxy far, far away. It seems, however, that the Force may have been at work long before Ahsoka Tano even existed:

Ahsoka Tano began her Jedi career as Anakin Skywalker’s Padawan learner; as it turns out, Dawson attended the Lee Strasberg Theatre and Film Institute and later appeared in Shattered Glass with one Hayden Christensen, who played Anakin in the Star Wars prequels. “I have to say, for Dave, going online and looking up things — when he came across a photo of the two of us hugging each other, he lost it. He said, ‘How is this…? This was meant to be.’”

Christensen will soon be making his return to the Star Wars universe as Darth Vader in the upcoming Disney+ limited series, OBI-WAN KENOBI: An Original Series.

Dawson also spoke about another Star Wars fan-favorite, Ashley Eckstein. Eckstein voiced Ahsoka in all seven seasons of Star Wars: The Clone Wars and played a huge role in developing the character into the Star Wars icon she is today.

“Ashley did such an incredible job and I know how the fans feel about her, and I know how she feels about this character and how much she’s given to it,” Dawson says. “And I know that it’s such a different feeling and space to bring this character that people have loved for so many years into live-action. I really, really, really wanted it to be something that people could enjoy and get into as another Ahsoka story.”

The interview ended with Dawson acknowledging that she would love to reprise the role.

Throughout, Dawson’s Ahsoka bounces between calm sage and ferocious warrior in a memorable, arresting performance; for her part, the actor is down for picking up the dual white lightsabers once more.

“I mean, I would love that opportunity,” she says. “I think it’s so cool that this show exists. I think it’s so cool that I got to show up and give information about this character, the Child, that everyone’s loved so much. You know, that she was not so much showing up as a cameo, but really being a storytelling device for new fans that have fallen in love with yet another new character that we’re getting to see grow. Little Grogu is just amazing.

Thanks to The Walt Disney Company’s Investors Day event on December 10, we now know that Dawson’s wish is being fulfilled with the Mandalorian spinoff, Ahsoka, debuting next Christmas. The Jon Favreau and Dave Filoni-led series will take place concurrently with The Mandalorian and will, presumably, feature Ahsoka searching for Admiral Thrawn throughout the galaxy.