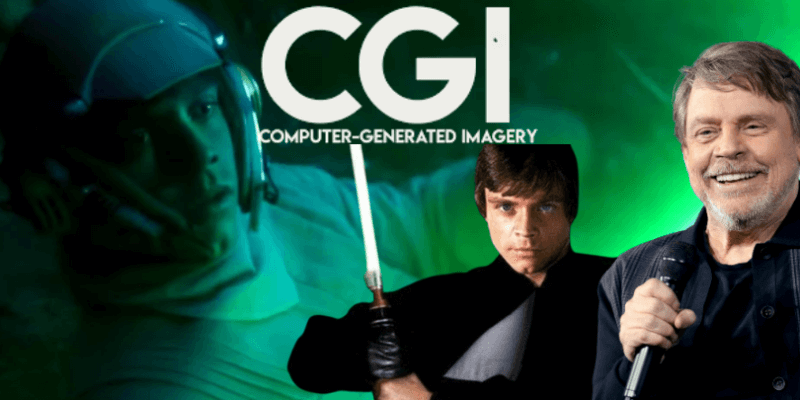 Mark Hamill is returning to the Star Wars universe as Luke Skywalker! If … a new rumor is to be believed, that is.

Allegedly, the Joker and Luke Skywalker actor has signed a deal with Lucasfilm that’ll permit it to create Star Wars movies using Hamill‘s likeness and computer generated imagery. But would a Mark Hamill CGI Luke actually work for more than just a scene?

We already know that Disney has the ability (and budget) to return veteran actors to their former youth through the magic of technology. Hamill may return as 30 something year old Luke Skywalker in a post-Return of the Jedi world just like Samuel L. Jackson did in Captain Marvel.

The report also suggests that Hamill as Skywalker could also be coming to Galaxy’s Edge at Hollywood Studios soon as a younger Luke.

Of course, we already saw a de-aged Hamill in Rise of Skywalker, but a short scene vs. an entire future Star Wars film is quite a different story indeed. This also potentially opens the door for Hamill to join The Mandalorian which takes place shortly after the original Star Wars trilogy.

Many Star Wars fans were displeased at the version of Luke Skywalker we saw in the third trilogy. His story saw only a brief interaction with General Leia and no reunion with Han Solo.

However, if we get a young Luke Skywalker in a future movie, the “sins” of The Force Awakens and The Last Jedi could be re-written. The sequel trilogy took Skywalker in a divisive direction, but whatever your feelings, most weren’t pleased that the character barely appeared in the Rise of Skywalker as a force ghost. (Despite an amazing scene that calls back to Empire Strikes Back.)

As a Star Wars fan, I am both cautious and excited at the possibility of Hamill returning as Luke Skywalker. Disney has proven that de-aging can be done, but whether a young Luke would work in a future Star Wars movie is yet to be seen.

Perhaps experimenting with the character at Galaxy’s Edge is the perfect way to see if Hamill and Disney have got what it takes to do the character justice in a future film.

As with any rumor, take this with a pinch of salt. It could all be bantha-fodder, after all.

Will Mark Hamill return to the Star Wars franchise as Luke Skywalker using CGI? Let us know in the comments below.