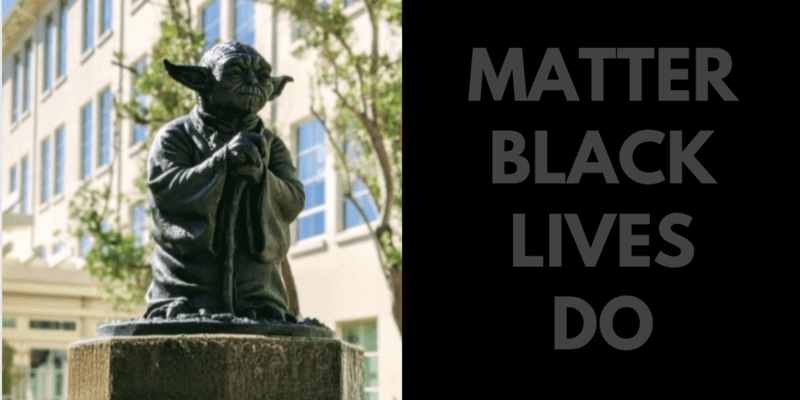 Over the past week or so, cities and towns across the United States of America and in international metro areas have seen their fair share of protests related to the Black Lives Matter movement.

The call for social change was sparked, this time, by the police death of George Floyd in Minneapolis, Minnesota. Upon investigation, Mr. Floyd’s death has been ruled a murder and multiple police officers have been charged in the case.

Now, someone has made Star Wars icon Yoda part of the Black Lives Matter cause. An anonymous individual wrote “Matter Black Lives Do” in bright green chalk on the Yoda statue that sits outside of Lucasfilm offices in San Francisco.

Lucasfilm shared a picture of the meaningful graffiti on the company’s official Instagram page, where Star Wars fan comments immediately started being posted.

Since Lucasfilm shared the image on an official social media channel, we think they approve of the Star Wars street art 100%!

What have Lucasfilm and Disney said about Black Lives Matter?

Ever since Star Wars actor John Boyega joined in last week’s Hyde Park, London protest, both The Walt Disney Company and the Lucasfilm family have been nothing but supportive of Black Lives Matter.

Disney has also spent time looking at internal racism over the last few days, including a meeting with ESPN staff members and legendary former athletes like the NFL’s Michael Strahan.

The Walt Disney family of companies has a long history of inclusion, and it is clear from their statements that they are doing what is necessary to make sure theme park Cast Members and other employees are treated fairly now and always.

What do you think about the Yoda statue Black Lives Matter message at Lucasfilm? Share your thoughts in the comments!