Is Taylor Gray Gearing-Up For Live-Action Ezra Bridger Debut? - Inside the Magic 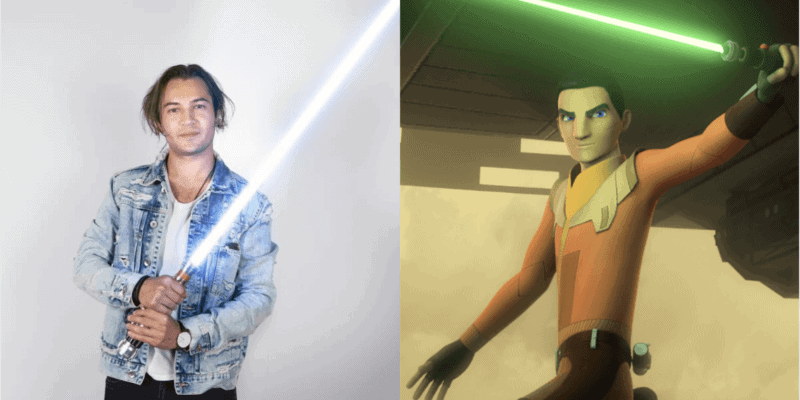 One of the most climactic moments of the series finale of Star Wars Rebels was Ezra Bridger’s (Taylor Gray) showdown with Grand Admiral Thrawn (Lars Mikkelson).

Eventually, Ezra sacrifices himself and was — at least by a certain faction of Star Wars fans — presumed dead. Voice actor Gray shared these details soon after the original airing of the Rebels final episode in 2018:

Gray addressed Ezra’s ultimate act and how that fit the man he’d become after training under Kanan.

“Kanan kind of led the way with his whole selfless act and … he came to be whole. Seeing the process that Kanan went through and how that came to an end, I think that was when we started talking about how Ezra is going to do something similar,” said Gray. “He has been led by this guy forever. Now he understands he must do something similar. The fun stuff, which we talked about – a lot of it was going to be that little nod and everything to Sabine in the end… entrusting her and that relationship that they’ve built and so to see how it ends with her going off with Ahsoka to come back to find him.”

Now, thanks to The Mandalorian Season 2, Episode 5 (Chapter 13: The Jedi), we know that Thrawn is not dead — and neither, presumably, is Bridger.

While this certainly isn’t confirmation that Gray will wield a lightsaber in the new series, it seems inevitable that both Thrawn and Bridger will appear — when we left Ahsoka at the end of Chapter 13: The Jedi, she had defeated Magistrate Morgan Elsbeth (Diana Lee Inosanto) with the help of Din Djarin (Pedro Pascal) and was off on a search for the villainous Grand Admiral.

It serves to reason that Ahsoka will pick-up where Dawson’s appearance in the second season of The Mandalorian left off.

“Having been in this business a long time you see stuff like this often. I didn’t know people were fan-casting for certain roles in any sense,” Gray shared with The Resistance Broadcast, per StarWarsNewsNet. “That was the main difference between [Star Wars: The] Clone Wars and Rebels, that the cast was mainly made up of screen actors. I’d never done voice-over before. I remember being to my agent like, ‘Does this mean that if they make it live-action I’ll do it?’ And she was like, ‘I’ve no clue.’”

While it is important to note that neither Disney nor Lucasfilm have confirmed that Gray will be appearing in live-action as Ezra Bridger in any upcoming Star Wars streaming shows, there is certainly a precedent. Katee Sackhoff — who was the voice actress behind animated character Bo-Katan Kryze — just reprised her role in live-action in The Mandalorian Season 2, Episode 3 (Chapter 11: The Heiress).

It is also important to remember that The Mandalorian and Rebels take place very close to one another in the Star Wars timeline. Dave Filoni has even previously said that it is “possible” that The Mandalorian begins before the finale of Rebels. This means that Gray’s age would be appropriate for a live action Ezra Bridger.

This is an exciting time to be a Star Wars fan. Since there is so much new Star Wars content coming down the Disney+ pipeline, there will be lots of casting news to be on the lookout for over the coming months and years.

In addition to Ahsoka, there is a second Mandalorian spinoff titled Rangers of the New Republic, plus a slew of other Star Wars shows. As Star Wars moves away from the Skywalker saga — though there are theories that Luke Skywalker has already met Grogu — the Star Wars story and the Star Wars universe is about to expand like it never has before.

Do you think Taylor Gray is gearing up for his live-action debut as Ezra Bridger in Ahsoka?

Comments Off on Is Taylor Gray Gearing-Up For Live-Action Ezra Bridger Debut?