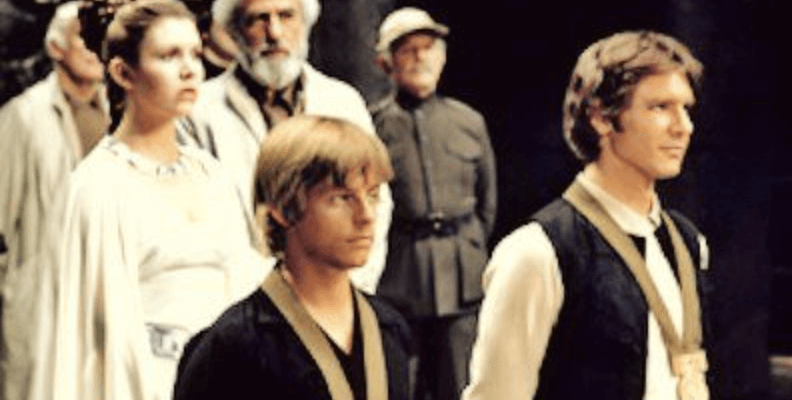 Star Wars actor Mark Hamill — who has played Jedi Luke Skywalker for over 40 years at this point — is known for his active social media presence and passion for the Star Wars fan community.

Hamill shared a never-before-heard story about filming the scene, in which he and Ford are receiving medals from Princess Leia Organa (Carrie Fisher):

It was Harrison’s idea to hold hands so our movements would be consistent & Carrie’s eye line would match up. Other than this moment, we hardly ever held hands. #TrueStory

Hilariously, Hamill’s fellow Star Wars actor Joonas Suotamo, who took on the role of Chewbacca after Peter Mayhew’s death, commented on the post:

Knowing this, I appreciate you holding my hand even more now.

Despite their different views of the Star Wars franchise, Hamill and Ford have enjoyed a decades-long friendship. In fact, both actors reprised their roles — as Skywalker and Solo, respectively — in the Star Wars sequel trilogy. Their roles, however, did not overlap like they did in the original trilogy.

Ford appeared primarily in Star Wars: Episode VII – The Force Awakens (2015), in which he was killed by his and Leia’s son, Kylo Ren/Ben Solo (Adam Driver).

Both actors had cameos in the final Skywalker Saga movie, Star Wars: Episode IX – The Rise of Skywalker (2019).

Hamill, for his part, recently returned to the Star Wars universe in The Mandalorian Season 2 finale episode. CGI de-aging technology was used to recreate Hamill’s look during the Star Wars: Episode VI – The Return of the Jedi (1983) era.

The Jedi Knight rescued Grogu (AKA Baby Yoda), Din Djarin (Pedro Pascal), and their companions before spiriting the Force-sensitive infant away to complete his Jedi training.

It is not yet known if or when Hamill will once again reprise his role as Luke Skywalker. He has had nothing but praise for Mandalorian director Peyton Reed and the rest of the Disney+ show’s creative team, so never say never.

What do you think about this fun tidbit of Star Wars franchise history?