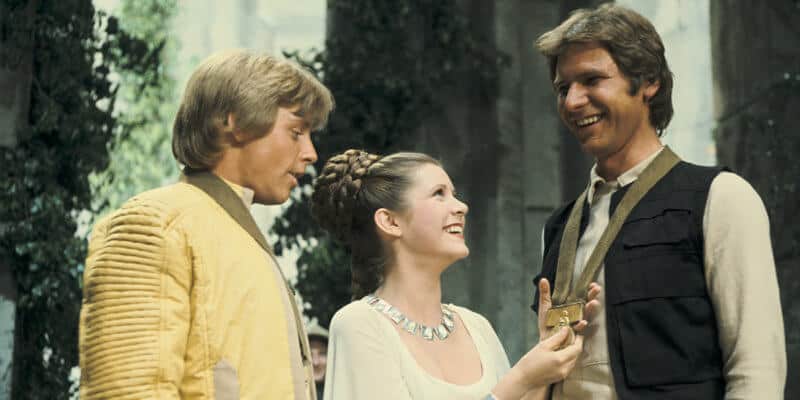 Carrie Fisher was the daughter of Hollywood royalty.

The late actress’s mother was silver screen icon Debbie Reynolds, and her father was the equally famous singer Eddie Fisher — he famously left Reynolds for Elizabeth Taylor, setting Carrie up for what was, at best, a challenging situation.

Nonetheless, Carrie, too, decided to pursue a career in entertainment and found herself cast as Princess Leia Organa in George Lucas’s Star Wars: A New Hope (1977) at age 19.

Carrie went on, as all Star Wars fans know, to become synonymous with Princess Leia. She played the part for over 40 years, from Lucas’s original trilogy in the 1970s and 1980s to the sequel trilogy that spanned from 2015 to 2019, ultimately ending the Skywalker Saga.

Two specific sore spots Skywalker’s portrayal in Rian Johnson’s The Last Jedi, which received the most backlash of any Star Wars movie in the most recent trilogy, and the perceived sidelining of John Boyega’s character, ex-stormtrooper Finn.

Recently, online rumors have been swirling that Disney and Lucasfilm are planning to somehow erase at least some sequel trilogy events from the existing Star Wars canon. Presumably, this would be accomplished by either using the World Between Worlds via Mandalorian spinoff series Ahsoka or retconning the sequels in some fashion through an entirely new Disney+ show.

As we’ve pointed out in our past coverage, the odds of the Star Wars sequel trilogy actually being retconned entirely — despite the rampant rumor mill — are highly unlikely for a number of reasons, including the financial success of the three films at the global box office.

Furthermore, Boyega and his two main co-stars, Daisy Ridley (Rey) and Oscar Isaac (Resistance pilot Poe Dameron), have all said they don’t want to return to the Star Wars story.

But, there might even be another reason Disney and Lucasfilm will never actually retcon the sequels — Carrie Fisher herself.

Inverse made an excellent point about the actress, who approved the creative decisions — including the casting of her daughter, Billie Lourd [pictured above] — made in the final three Skywalker Saga movies before her December 2016 death:

…[she] placed her faith in JJ Abrams and Rian Johnson to make a certain series of films.

Fisher co-dedicated her final memoir — The Princess Diarist— to her Star Wars co-stars and directors (excluding Richard Marquand). Fisher loved working with Abrams and Johnson. Had she not, she wouldn’t have said nice things about them. The snub of Return of the Jedi director Marquand speaks volumes. Fisher wasn’t someone who played diplomatic Hollywood games. She was honest and upfront, and she was behind the creative decisions of The Force Awakens and The Last Jedi. All the way.

Related: “God gave me the part” – After-Death Note from Carrie Fisher Found by Her Brother

Actress Carrie Fisher is still beloved by Star Wars fans the world over, and Lucasfilm undoubtedly knows what she, and Leia, mean to the fandom.

The fact that the one-and-only Princess General approved of the sequels may very well be reason enough to leave them alone, for good.

What do you think? Could Carrie Fisher’s legacy play a role in the decisions that are ultimately made about the Star Wars sequels?