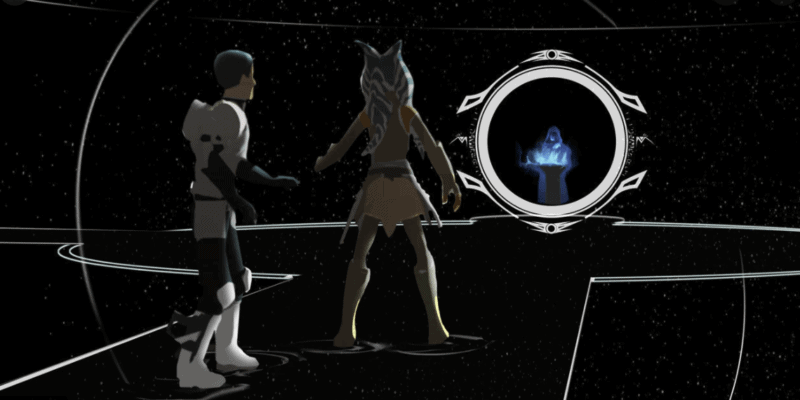 If you spend long enough talking to any Star Wars fan, you’ll find out his or her opinion on a couple of things (whether or not you asked for it): Jar-Jar Binks and the sequel trilogy.

Rian Johnson’s installment, The Last Jedi, arguably garnered the most backlash, with actress Kelly Marie Tran (Rose Tico) being forced off of social media and into therapy as a result. Leading lady Daisy Ridley (Rey) has also spoken out about negative fan reactions to the latest Star Wars trilogy.

All this to say, many in the Star Wars fan community wish the sequel trilogy simply didn’t exist — or, at the very least, wasn’t canon. In fact, one Star Wars writer has even tried to retcon the storyline and online rumors have abounded about Lucasfilm and Disney erasing the events of the entire trilogy.

As it turns out, this may be more plausible than many fans expected, all thanks to an upcoming The Mandalorian spinoff series.

The World Between Worlds

To see how this erasure of very important events, including the deaths of all three original trilogy main characters — Luke Skywalker (Mark Hamill), Princess General Leia Organa (Carrie Fisher), and Han Solo (Harrison Ford) — could occur, you must first understand the World Between Worlds.

The World Between Worlds, also known as Vergence Scatter, was a mystical plane within the the Force that served as a collection of doors and pathways existing between time and space, linking all moments in time together.

The Sith’s designs were thwarted when the Jedi Padawan Ezra Bridger [voiced by Taylor Gray] discovered world’s key, and was able to unlock and enter the World Between Worlds first. After saving Ahsoka Tano [voiced by Ashley Eckstein/portrayed in live-action by Rosario Dawson] from the past by pulling her into the realm, Bridger became adamant in also changing the fate of his master, Kanan Jarrus [voiced by Freddie Prinze, Jr.]. However, Tano reasoned with the Padawan that they would all be dead without Jarrus’ selfless sacrifice, telling Bridger that she understood the pain of being unable to save one’s master, citing her own experiences, and taught Ezra Bridger to let go. Turning away, the pair resolved to close the portal to the realm to prevent others from accessing it, only to encounter Darth Sidious, who tried to enter the realm using the Force users.

From The Mandalorian Season 2, Episode 5 (“Chapter 13: The Jedi”), we know that Ahsoka Tano is searching for Ezra Bridger and Grand Admiral Thrawn [voiced by Lars Mikkelsen].

After providing both bounty hunter Din Djarin (Pedro Pascal) and Mandalorian fans with Grogu’s (AKA The Child AKA Baby Yoda) backstory, Djarin and Tano team-up to defeat Corvus Magistrate Morgan Elsbeth (Diana Lee Inosanto), who ultimately tells Tano that her master is none other than Thrawn himself.

We can, therefore, assume that the recently announced Ahsoka spinoff series — set to culminate in an epic television event that coincides with both The Mandalorian Season 3 and another spinoff, Rangers of the New Republic — will pick-up where “Chapter 13: The Jedi” left off.

This means that Anakin Skywalker’s Padawan, Tano — and her famous white lightsaber duo — will almost certainly enter the World Between Worlds at some point in the upcoming live-action Ahsoka series.

Okay, so what’s the endgame?

The theory here is that Ahsoka will — or certainly, at least, could — be used to retcon the Star Wars sequel trilogy thanks to the fact that the World Between Worlds introduced time travel to the Star Wars universe.

Previously, Dave Filoni — of Star Wars: The Clone Wars, Star Wars Rebels, and The Mandalorian fame — noted that the events of The Mandalorian could “potentially” take place before the end of Rebels, meaning the Star Wars timeline certainly works out in this situation.

Some online fan speculation has noted that the Ahsoka title card, which was unveiled by Lucasfilm President Kathleen Kennedy at the Disney Investor Day 2020 event, appears to be the Veil of the Force/The World Between Worlds.

While this could, of course, simply indicate that Tano will return to the World Between Worlds — which is expected if she wants to find Thrawn and Bridger — it could also be a signal that Disney and Lucasfilm are planning to erase the Star Wars canon events involving the aforementioned Rey, Kylo Ren/Ben Solo (Adam Driver), Resistance pilot Poe Dameron (Oscar Isaac), and former stormtrooper Finn (John Boyega).

It’s worth noting that Star Wars fans have differing opinions regarding in-canon retconning — some do not want to see this happen with the sequels, while others would prefer it. Thus, the powers-that-be at Lucasfilm and Disney are unlikely to please the entire fandom no matter which route they decide to take.

For now, all we can do is wait.

At this time, the third season of The Mandalorian, Ahsoka, and Rangers of the New Republic are not listed on Disney’s official 2021 release schedule, so unless something changes, the earliest we can anticipate them streaming on Disney+ is 2022.

What are your thoughts? Would you like to see the Star Wars sequel trilogy scrapped from canon via Ahsoka?