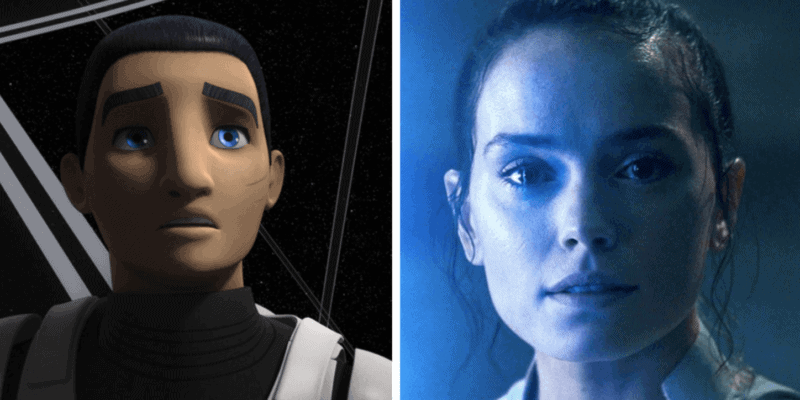 Rey — who was born in 15 ABY (After the Battle of Yavin) — spends most of the sequels trying to discover where she comes from, ultimately discovering her father was a bioengineered Strand-Cast cloned from Emperor Palpatine/Darth Sidious.

In the animated series Star Wars Rebels, during Season 3, Episode 14 (“A World Between Worlds”) Ezra Bridger (voiced by Taylor Gray) visits the Jedi Temple on Lothal, but finds himself in a strange new dimension he’s never seen before. Seemingly endless walkways led to portals that would take a person to other places in time and space — ultimately allowing Bridger to intervene in the Rebels Season 2 event when Ahsoka Tano (voiced by Ashley Eckstein) had a lightsaber battle with Darth Vader, ultimately allowing Bridger and his Jedi Master Kanan Jarrus (voiced by Freddie Prinze, Jr) to escape.

As CBR points out:

This is essentially how Rebels introduced time travel in the Star Wars universe.

One of the voices that can be heard in the World Between Worlds is Rey’s. As Ezra walks, Rey says, “We’ll see each other again. I believe that,” which is a line lifted from The Force Awakens. At the end of the J.J. Abrams-directed film, Rey sets off to go find Luke Skywalker, but before she does, she delivers that line to an unconscious Finn.

As we continue learning more about the interconnected nature of Lucasfilm’s upcoming slate of Star Wars content — which currently features at least 11 Disney+ series and three feature-length films — the World Between Worlds could become increasingly important.

Furthermore, The Mandalorian showrunner Jon Favreau and executive producer Dave Filoni — the latter of which also worked on both Clone Wars and Rebels — have begun bringing animated characters, such as Ahsoka Tano (Rosario Dawson) and Bo-Katan Kryze (Katee Sackhoff) — into the live-action Star Wars universe for the first time.

There have even been rumors of Star Wars characters like Hera Syndulla showing up as more TV shows go into production.

This further expands the opportunities Star Wars creatives have to delve into new stories and the intertwined nature of the stories that exist throughout every piece of Star Wars canon material.

Next on the docket are two Disney+ shows, The Book of Boba Fett — starring Temuera Morrison as the iconic bounty hunter and Ming-Na Wen as mercenary Fennec Shand — and animated series Star Wars: The Bad Batch. Both are slated for 2021 releases.

Lucasfilm President Kathleen Kennedy has also confirmed two Mandalorian spinoffs, Ahsoka and Rangers of the New Republic, will be coming.

Ahsoka will feature Dawson reprising her live-action portrayal as Tano searches the galaxy to find Bridger and Grand Admiral Thrawn — the World Between Worlds could absolutely factor into this series in some fashion.

Few details are known about Rangers of the New Republic at this time.

Do you hope to see the World Between Worlds play a bigger role in Star Wars? How do you feel about Rey’s voice being heard in Star Wars Rebels?