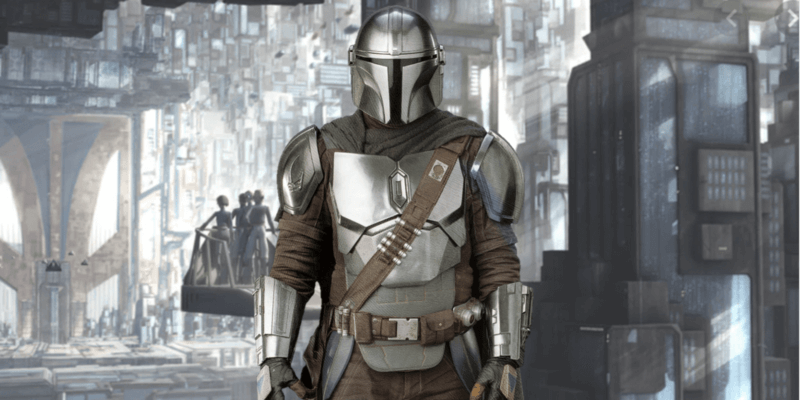 If you’ve been watching The Mandalorian for the past two seasons, you know that Din Djarin (Pedro Pascal) has undergone quite a transformation.

From Grogu’s (AKA The Child AKA Baby Yoda) reluctant caretaker in the first season to the tiny Jedi foundling’s veritable father by the Season 2 finale episode (“Chapter 16: The Rescue”), Djarin — and Pascal — have taken us on an incredible character development journey.

As much as Pascal’s acting has played a major part in Djarin’s growth, Mandalorian creator and showrunner Jon Favreau and executive producer Dave Filoni are behind-the-scenes making the calls that have altered the title Mandalorian’s trajectory from lone bounty hunter to the leader of an unlikely crew, who all wanted to board Moff Gideon’s (Giancarlo Esposito) Imperial starship for their own reasons.

Some, like Fennec Shand (Ming-Na Wen) and Mandalorian armor-clad Boba Fett (Temuera Morrison) were bound to Djarin by a debt they felt they owed, while others, like Star Wars Rebels and Star Wars: The Clone Wars character, Bo-Katan Kryze (Katee Sackhoff), had personal vendettas.

Kryze — sister of Mandalore’s Duchess Satine Kryze (voiced by Anna Gray) — has been on a search for the Darksaber to retake Mandalore ever since it was taken from her. Kryze received the Darksaber from Sabine Wren (voiced by Tiya Sircar) in Rebels, who found the black-bladed saber among Maul’s belongings, but it has not been made clear how Gideon and his Imperial Remnant came into possession of the ancient Mandalorian weapon.

Related: ‘Mandalorian’ Composer on How They Paid Respect to Original ‘Star Wars’

ScreenRant shares this explanation of how Bo-Katan came to hold the Darksaber :

…upon returning to Mandalore, her mother, Ursa Wren, tells Sabine she cannot truly lay claim to the Darksaber unless she wins it in combat. Later on, Sabine manages to do just that when she fights Gar Saxon, the Empire’s installed ruler of Mandalore. Yet, though Sabine rightfully wins possession of the Darksaber, she chooses to instead find a leader who will unite Mandalore against the Empire, not believing herself destined for the task. Sabine goes on to present Bo-Katan with the Darksaber in Rebels season 4, and the response from the gathered Mandalorians certainly suggests she is its new master.

This, of course, explains why it mattered so much to her that Moff Gideon surrenders only to her — unless this happened, the leader of the Nite Owl warriors didn’t feel like she could honorably accept the Darksaber.

In reality, of course, Djarin defeated Gideon in a beskar spear vs. Darksaber battle that ends with him becoming the de facto ruler of Mandalore. As it turns out, that might be exactly where Favreau, Filoni, and their team of incredible directors — including Bryce Dallas Howard, Robert Rodriguez, and Peyton Reed — have been taking us the entire series.

While some speculate that Bo-Katan and Din will fight for the Darksaber, with Din already offering the weapon to Bo-Katan, it is possible that Season 3 might show Din that he is a better leader for the new Mandalore. In fact, it is possible that The Mandalorian might end with Din retaining his hold of the Darksaber in order to bring Mandalore back to its former glory.

This would truly be a redemption story for the ages — the foundling becoming the leader of the people who saved him and trained him to become a warrior. CBR’s assessment continues:

Bo-Katan dismisses all the Mandalorians she deems fanatics (Din and the Watch) and those unworthy of the Mandalorian title (Boba Fett). If Mandalore is to be restored, it cannot have this sort of prejudice, especially considering that many of her appearance feature her dismissing or criticizing the Mandalorians who want her help.

The implication here, of course, is that Djarin is better suited to lead all people, as he has spent two seasons growing, learning, and re-defining his own prejudices — look at the relationship he builds with droid IG-11 (voiced by Taika Waititi) throughout Season 1 of the hit series.

Furthermore, Bo-Katan Kryze is already a reluctant leader. She didn’t necessarily want to accept the Darksaber in the first place, so even she may come to the place that she believes Din Djarin is the more worthy ruler of New Mandalore.

Related: Grogu Leaving the Jedi Would Solve a Lot of Problems

At this time, we do not have details about when The Mandalorian Season 3 will premiere. The show — and two of its confirmed spinoffs, Ahsoka and Rangers of the New Republic — were conspicuously absent from Disney’s 2021 release schedule.

We do know that The Book of Boba Fett — a third spinoff series that will take place within The Mandalorian universe — will debut in December 2021.

Pedro Pascal recently said that the series is focused on “quality over quantity” within the Star Wars universe, so it is possible that there won’t be many more seasons — Giancarlo Esposito previously teased that four seasons were planned. The endgame could potentially be Din Djarin becoming the ruler of New Mandalore, which could carry over into other Star Wars series on Disney+ down the road as the franchise continues to expand beyond the second season of The Mandalorian.

Stay tuned to Inside the Magic for the latest details about the third season of The Mandalorian — including any information about whether or not Luke Skywalker (CGI Mark Hamill in the Mandalorian Season 2 finale) and Grogu will appear, or if they are actually getting their own series.

What do you think? Is Favreau setting-up Din Djarin as the rightful leader of New Mandalore?