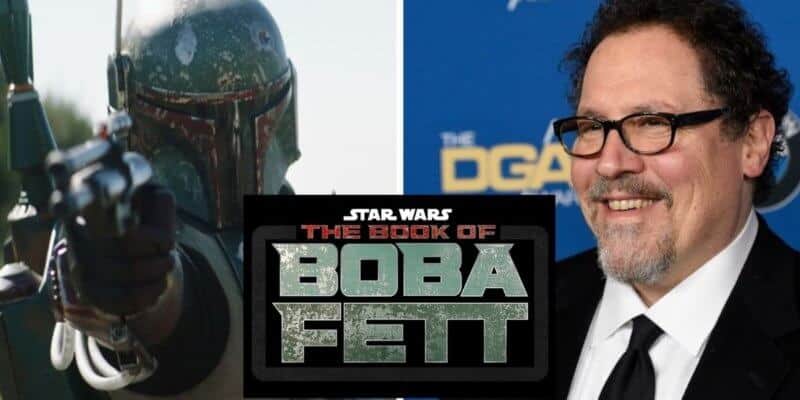 The Mandalorian creator Jon Favreau made an appearance on Good Morning America where he talked about everything Mando — From surprise appearances in the season two finale to Baby Yoda’s backstory to the upcoming series, The Book of Boba Fett.

SPOILER WARNING — If you are not yet caught up on The Mandalorian, stop reading!

At approximately the 1:50 minute mark during the Good Morning America interview, you will hear Favreau say:

“At the end of the show, Boba Fett came out and it said ‘The Book of Boba Fett coming Christmas, uh excuse me, coming December 2021 and that wasn’t part of the big Disney announcement [referring to The Walt Disney Company Investor Day on December 10].

We wanted to hold this back because we didn’t want to spoil the surprise of all the shows when Kathleen Kennedy was up there and so they let me keep this one a secret.”

Did Favreau just accidentally slip when The Book of Boba Fett will debut on Disney+? He said, “coming Christmas, uh excuse me, coming December 2021.” So, what exactly does this mean? Will it debut on Christmas Day, or did Favreau just make an honest mistake considering there are so many upcoming Star Wars spinoff series debuting for the next chapter? Or, did he mean it is coming next Christmas season, which would align with the premiere being in December 2021?

The upcoming spinoff series will more than likely run concurrently with Rangers of the New Republic, Ahsoka, and The Mandalorian season 3. We know that Kathleen Kennedy, Lucasfilm President, already confirmed that the “next chapter will begin Christmas 2021,” which will include all of these upcoming series.

Unfortunately at this time, we do not have an exact debut date for The Book of Boba Fett, but Inside the Magic will keep you updated as we get official information.

You can watch the full interview with Good Morning America and Jon Favreau here:

The Mandalorian Seasons 1 and 2 are streaming on Disney+ now. If you are not yet signed up, you can get started here.

Have you seen the season finale yet? Are you excited to see The Book of Boba Fett when it debuts on Disney+? Let us know in the comments below.

Comments Off on When Will ‘The Book of Boba Fett’ Actually Premiere? Favreau Weighs In