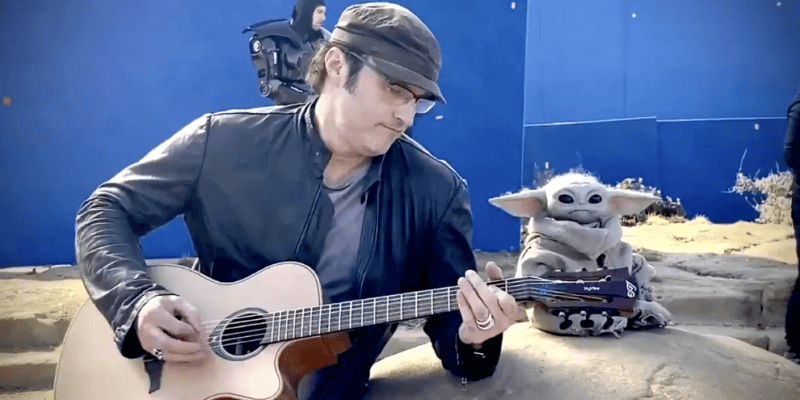 Yesterday, director and producer Robert Rodriguez (Spy Kids, From Dusk Till Dawn, Frank Miller’s Sin City), gave his social media followers the cutest Christmas gift — a video of him jamming with Grogu on The Mandalorian set!

Here’s a Christmas present to all those who asked me what it’s like to hang out with Baby Yoda on the set of #TheMandalorian #TheTragedy. Check out #DisneyGallery for more behind the scenes! pic.twitter.com/6ShINBxJAN

Related: What Could Grogu’s Origin Story Be?

Rodriguez — whose IMDb page confirms he is working as executive producer on the first episode of is upcoming Mandalorian spinoff series The Book of Boba Fett — directed The Mandalorian Season 2, Episode 6 (Chapter 14: The Tragedy).

The episode was one of the second season’s most intense, with Din Djarin (Pedro Pascal) losing Grogu (AKA The Child AKA Baby Yoda) to Moff Gideon’s Dark Trooper squadron while the young foundling sat on the “Seeing Stone” on the planet Tython.

At this time, following The Mandalorian Season 2 finale, few details are known about the upcoming third season of the popular Disney+ show.

Creator and showrunner Jon Favreau recently confirmed that The Book of Boba Fett — announced in a post-credits scene during Season 2, Episode 8 (Chapter 16: The Rescue) — will air in December 2021. It is, as per Rodriguez’s IMDb, currently filming.

When Disney’s 2021 release schedule dropped last week, The Mandalorian — and two of it’s spinoffs, Ahsoka and Rangers of the New Republic — were not listed, so we do not know when we will next see Din Djarin and the Darksaber on our television screens.

Grogu, for his part, left with Luke Skywalker (CGI Mark Hamill) at the end of the second season finale, and details have not been released about whether or not the popular character will return in The Mandalorian Season 3 or if he will be part of yet another spinoff, potentially featuring Skywalker.

Related: Grogu Leaving the Jedi Would Solve a Lot of Problems

Stay tuned to Inside the Magic for all of the latest details about the world of The Mandalorian and tell us what you think about Rodriguez and “Baby Yoda’s” on-set jam session!