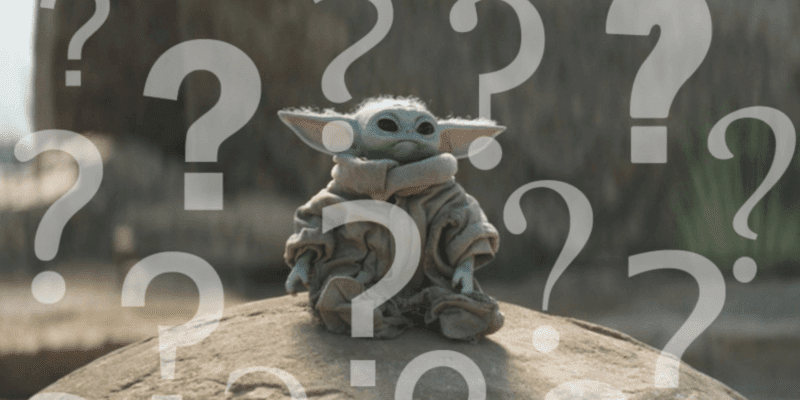 From the moment we saw Grogu — then known simply as “The Asset” — in the first episode of Jon Favreau and Dave Filoni’s hit Disney+ series, The Mandalorian, on November 12, 2019, he stole our hearts.

But, where did the adorable foundling, now known by many as “The Child” or “Baby Yoda,” come from? Here, we take a look at what may possibly be Grogu’s origin story.

Master Yoda, of course, is one of Star Wars‘s most popular characters and needs no introduction — from the moment Luke Skywalker (Mark Hamill) raised his X-wing from the bog on Dagobah in Star Wars: Episode V – The Empire Strikes Back (1980), Yoda was cemented in Star Wars lore forever.

Yaddle, on the other hand, is only seen in Star Wars: Episode I – The Phantom Menace (1999), though she is also mentioned in the Claudia Gray novel Master & Apprentice and the Jedi Fallen Order video game. Regardless, canon materials tell Star Wars fans significantly less about Yaddle than Yoda.

One Grogu origin story theory is that the 50-year-old infant is biologically related to Yoda and/or Yaddle — we are never told if the two older members of the species are related to one another by blood or not.

This tracks insofar as we don’t know of any other members of their species, so it is possible that one or both of the elder Jedi are biologically related to little Grogu. ScreenRant shared these thoughts about this particular theory:

While it is unlikely Grogu is the son of Yaddle, it is not impossible, and even if they are not immediate family Grogu could be a nephew of the Jedi Master, going off the assumption that these beings are born the same way as every other and not born out of the Force.

A blood relation could also make sense in that we know Yoda and Grogu both have incredibly high midi-chlorian counts — Yoda’s count, which is just under 20,000, was first shared during a conversation between Qui-Gon Jinn (Liam Neeson) and Obi-Wan Kenobi (Ewan McGregor) in The Phantom Menace. Favreau and Filoni confirmed that Grogu also has an incredibly high midi-cholorian count — which was already presumed — during The Mandalorian Chapter 12: The Siege in Dr. Pershing’s lab.

What we don’t know is if this high count is typical of the species or if it is specific to Yoda and Grogu. That information could help narrow down the likelihood of a biological relationship.

Another “How did Grogu come to be?” theory that involves Yoda and Yaddle is the notion that one of them transported The Child from their homeworld to the Jedi Temple on Coruscant following some sort of migration or catastrophic event that left him orphaned.

Thanks to Ahsoka Tano’s (Rosario Dawson) conversation with Din Djarin (Pedro Pascal) in The Mandalorian Season 2, Episode 5 (Chapter 13: The Jedi), we know that someone saved Grogu from the Jedi Temple during the execution of Order 66, when Anakin Skywalker — during his descent into Darth Vader — killed a group of innocent younglings.

Presumably, unless Grogu was actually born on Coruscant — which is unlikely and in which case he would almost have to belong to Yaddle since no other known females of her species were present on the planet — he was brought there by others of his kind for his Jedi training.

Ahsoka has yet to provide any details about Grogu’s life prior to Coruscant, which is in-line with the fact that George Lucas has always been tightlipped about Master Yoda’s history as well — Favreau and Filoni are carrying the Star Wars torch (or lightsaber) in this regard when it comes to not revealing too much about Grogu’s home planet or very early life.

We may or may not get additional details about his history in the upcoming Ahsoka spinoff series, which is set to primarily follow Dawson reprising her role as Anakin Skywalker’s former Padawan while searching for Grand Admiral Thrawn and Ezra Bridger.

Cloning, as any Star Wars fan knows, plays a major role in the overall storyline in a galaxy far, far away — even iconic bounty hunter Boba Fett (Temuera Morrison in The Mandalorian and the upcoming The Book of Boba Fett) is a clone, created from Jango Fett’s DNA.

Jango, of course, was the template for the Grand Army of the Republic (AKA the “clone army”), and Boba was the one clone he was allowed to keep to raise as his child — this means Boba aged normally, not at the expedited rate the thousands upon thousands of other clones did.

We even got a taste of what Moff Gideon (Giancarlo Esposito) and Dr. Pershing (Omid Abtahi) were doing in their lab — which could potentially involve cloning and absolutely somehow involves both Grogu and the origins of Supreme Leader Snoke — in The Mandalorian Season 2, Episode 4 (Chapter 12: The Siege) when Cara Dune (Gina Carano), Greef Karga (Carl Weathers), and Djarin discover a supposedly abandoned Imperial base that turns out to be not-so-deserted.

It is important to remember, though, that cloning any Force-sensitive being — particularly, one would assume, one as powerful as Yoda — is next-to-impossible, as we learn here:

Following his death at the hands of Darth Vader, Emperor Palpatine projects his spirit into a rough clone body to preserve his life force, but the body is weak and unstable. His Sith cultists continue attempting to clone him to make an appropriate vessel but instead turn out a series of genetic abominations. Only one actually turns out to be a stable being (although not an exact genetic duplicate of Palpatine) but has one major flaw for Palpatine’s purposes: he’s not Force-sensitive. That man, cast aside for being useless, grows up to become Rey’s father; although he has no Force connection, she does and becomes a Jedi.

This rule would pretty much exclude any possibility of Grogu being cloned from Yoda. Time frame aside, it’s already been shown that cloning technology is difficult at best, that it doesn’t tend to work when it comes to Force users, and that even on the one occasion it did, the resulting clone was not Force-sensitive, which Grogu is.

If you love Grogu as much as the next Star Wars fan, you’re undoubtedly ready to know what’s next for him and the famous Jedi Knight who is now training him following the Mandalorian season 2 finale.

Which Grogu origin story theory is your money on? Or, do you have another idea altogether? Until Favreau and Filoni clear things up in the third season of The Mandalorian or one of its spinoff series — Ahsoka, Rangers of the New Republic, and The Book of Boba Fett — we will have to continue to wonder about the beginnings of Yoda, Yaddle, and Grogu’s mysterious species.

Comments Off on What Could Grogu’s Origin Story Be?