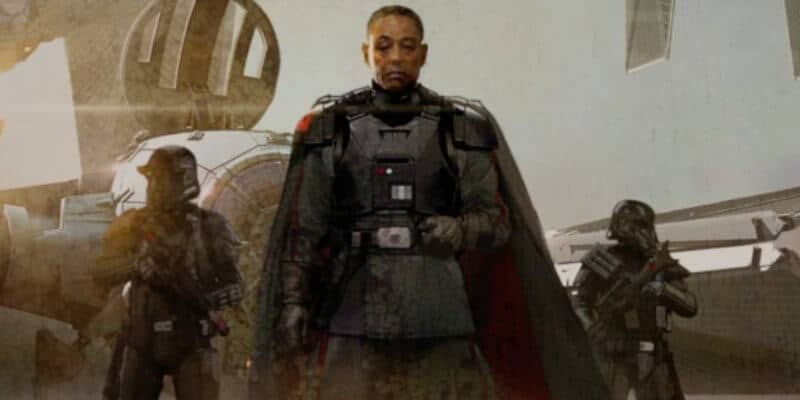 Now that The Mandalorian season 2 has ended, Star Wars fans all over the galaxy are looking forward to the show’s third season, which is set to release in December 2021.

Disney has also announced a number of Star Wars spinoff series that are coming to Disney+. That being said, it seems a certain villain wants in on the spinoff action.

Giancarlo Esposito, who has played Moff Gideon in both seasons of The Mandalorian so far, showed a lot of enthusiasm during an Esquire interview following The Walt Disney Company’s Investor Day 2020.

“I sat there and went, ‘Hey, what about me?!”, jokingly of course, “People keep asking me, ‘Why aren’t you in Season Two more?” I said, ‘Because we’re teasing you. I’m the heavy, and it’ll take a little time to get to what Moff really wants.'”

But, in all seriousness, Esposito would love to return to the Disney+ Star Wars franchise in a spinoff series:

“The answer is, yes, I would be interested in that if there was enough material and storyline to indulge that,” he says. “But first I want to be true to this project [The Mandalorian].“

Gideon’s story arc in Season 2 of The Mandalorian concluded with Din Djarin (Pedro Pascal) defeating him in a Darksaber vs. beskar spear battle and, ultimately, holding the Imperial sympathizer captive in his own ship instead of killing him.

Since Bo-Katan Kryze (Katee Sackhoff) still wants to have her day punishing Gideon for taking the black-bladed saber from her — how, exactly, he did this has not yet been shared — it is certainly possible that Gideon will return at some point in a future series.

What shows could Moff Gideon return in?

Although not all of the Star Wars spinoffs announced during Investor Day make sense for the Moff’s return, several potentially could — multiple series will pull from The Mandalorian’s storyline and, theoretically, Esposito’s character could appear in any of these shows.

Aside from the most obvious possibility of Gideon returning in Season 3 of The Mandalorian, here are Esposito’s other options, if Disney and Lucasfilm decide to carry out his character’s story line.

Ahsoka, starring Rosario Dawson as Ahsoka Tano, could be a possibility. After seeing how Luke Skywalker (CGI Mark Hamill) decimated every Dark Trooper in his path, and the pure fear on Gideon’s face, it would be interesting to see him in a combat scenario with a Jedi. By this point in the timeline, Tano has left the Jedi Order, but, nonetheless, a face-off with Gideon would be intriguing.

Rangers of the New Republic is the second Mandalorian spinoff that was confirmed at Investor Day. Although no details about this series have been shared, it could potentially follow Cara Dune (Gina Carano) and her adventures as a New Republic Marshal on Nevarro.

The potential for Gideon to return in this series is certainly there — he could play a role in a storyline involving Dr. Pershing’s now-destroyed lab that was discovered in The Mandalorian Season 2, Episode 4 (Chapter 12: The Seige).

The Book of Boba Fett was announced in a post credits scene following The Mandalorian Season 2 finale episode, Chapter 16: The Rescue. Boba Fett (Temuera Morrison) and Fennec Shand (Ming-Na Wen) took over Jabba the Hutt’s former palace on Tatooine and made all of our jaws drop to the floor.

It doesn’t seem likely that Gideon will return in this series, but with Favreau and Filoni, anything can happen.

Each of these shows have characters that have operated and live within the world the Gideon already exists in, so having him reappear in one of them could potentially make sense.

But, as Esposito mentioned, a reappearance would need to fit into the overall story — although with Gideon left alive following The Mandalorian finale, it certainly seems like we may not have seen the last of him yet.

Do you want to see Moff Gideon return in a Disney+ spin-off?