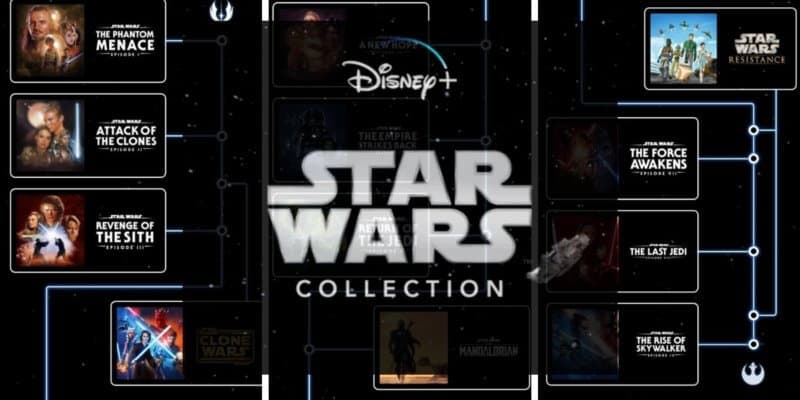 What is the relation between Rey and Luke Skywalker? How does Obi-Wan Kenobi fit into the storyline? When did Anakin Skywalker become Darth Vader? Where does The Mandalorian and Boba Fett fit into all of this? It’s safe to say, there is a lot to try and keep track of and follow within the Star Wars saga.

Well, Disney+ has just released an official Star Wars timeline of the current 15 stories so that viewers can easily figure out the correct storylines and timing of all 120 hours of content. The timeline, which was sent out via email, is as follows:

Related: Here’s How Inside the Magic Recommends Watching ‘Star Wars’ Movies and Shows

Obi-Wan Kenobi (Ewan McGregor) is a young apprentice Jedi knight under the tutelage of Qui-Gon Jinn (Liam Neeson) ; Anakin Skywalker (Jake Lloyd), who will later father Luke Skywalker and become known as Darth Vader, is just a 9-year-old boy. When the Trade Federation cuts off all routes to the planet Naboo, Qui-Gon and Obi-Wan are assigned to settle the matter.

Set ten years after the events of “The Phantom Menace,” the Republic continues to be mired in strife and chaos. A separatist movement encompassing hundreds of planets and powerful corporate alliances poses new threats to the galaxy that even the Jedi cannot stem. These moves, long planned by an as yet unrevealed and powerful force, lead to the beginning of the Clone Wars — and the beginning of the end of the Republic.

The first weekly TV series from Lucasfilm Animation chronicles the adventures of Anakin Skywalker, Yoda, Obi-Wan Kenobi and other popular characters from the `Star Wars’ universe during the violent Clone Wars, as dwindling numbers of Jedi knights struggle to restore peace.

It has been three years since the Clone Wars began. Jedi Master Obi-Wan Kenobi (Ewan McGregor) and Jedi Knight Anakin Skywalker (Hayden Christensen) rescue Chancellor Palpatine (Ian McDiarmid) from General Grievous, the commander of the droid armies, but Grievous escapes. Suspicions are raised within the Jedi Council concerning Chancellor Palpatine, with whom Anakin has formed a bond. Asked to spy on the chancellor, and full of bitterness toward the Jedi Council, Anakin embraces the Dark Side.

Young Han Solo finds adventure when he joins forces with a gang of galactic smugglers and a 190-year-old Wookie named Chewbacca. Indebted to the gangster Dryden Vos, the crew devises a daring plan to travel to the mining planet Kessel to steal a batch of valuable coaxium. In need of a fast ship, Solo meets Lando Calrissian, the suave owner of the perfect vessel for the dangerous mission — the Millennium Falcon.

This animated entry in the `Star Wars’ franchise fills the gap between the events of `Episode III’ and `Episode IV’. Imperial forces occupy a remote planet and are ruling – and ruining – its inhabitants’ lives with an iron fist. A clever, disparate crew aboard the starship Ghost takes a stand against the Empire, facing new villains and colourful adversaries as they attempt to ignite a rebellion. The rebels on the Ghost include leader Kanan, ace pilot Hera, feisty heroine Sabine, tough guy Zeb and 14-year-old con artist Ezra.

Former scientist Galen Erso lives on a farm with his wife and young daughter, Jyn. His peaceful existence comes crashing down when the evil Orson Krennic takes him away from his beloved family. Many years later, Galen becomes the Empire’s lead engineer for the most powerful weapon in the galaxy, the Death Star. Knowing that her father holds the key to its destruction, Jyn joins forces with a spy and other resistance fighters to steal the space station’s plans for the Rebel Alliance.

The Imperial Forces — under orders from cruel Darth Vader (David Prowse) — hold Princess Leia (Carrie Fisher) hostage, in their efforts to quell the rebellion against the Galactic Empire. Luke Skywalker (Mark Hamill) and Han Solo (Harrison Ford), captain of the Millennium Falcon, work together with the companionable droid duo R2-D2 (Kenny Baker) and C-3PO (Anthony Daniels) to rescue the beautiful princess, help the Rebel Alliance, and restore freedom and justice to the Galaxy.

The adventure continues in this “Star Wars” sequel. Luke Skywalker (Mark Hamill), Han Solo (Harrison Ford), Princess Leia (Carrie Fisher) and Chewbacca (Peter Mayhew) face attack by the Imperial forces and its AT-AT walkers on the ice planet Hoth. While Han and Leia escape in the Millennium Falcon, Luke travels to Dagobah in search of Yoda. Only with the Jedi master’s help will Luke survive when the dark side of the Force beckons him into the ultimate duel with Darth Vader (David Prowse).

Luke Skywalker (Mark Hamill) battles horrible Jabba the Hut and cruel Darth Vader to save his comrades in the Rebel Alliance and triumph over the Galactic Empire. Han Solo (Harrison Ford) and Princess Leia (Carrie Fisher) reaffirm their love and team with Chewbacca, Lando Calrissian (Billy Dee Williams), the Ewoks and the androids C-3PO and R2-D2 to aid in the disruption of the Dark Side and the defeat of the evil emperor.

A lone gunfighter makes his way through the outer reaches of the galaxy, far from the authority of the New Republic.

Young New Republic pilot Kazuda Xiono is recruited by Resistance Commander Poe Dameron for a secret mission on Colossus — an aircraft refueling station on the ocean planet of Castilon. A misunderstanding causes Kaz to participate in a dangerous race to prove himself. Kaz struggles to maintain his cover as a mechanic and spy as he tries to adjust to this new normal. Kaz’s work as a spy takes him across the known galaxy on adventures with Poe Dameron and their droids, BB-8 and CB-23, as they seek to bring down the First Order.

Set thirty years after Return of the Jedi, The Force Awakens follows Rey, Finn, Poe Dameron, and Han Solo’s search for Luke Skywalker and their fight in the Resistance, led by General Leia Organa and veterans of the Rebel Alliance, against Kylo Ren and the First Order, a successor to the Galactic Empire.

The Last Jedi follows Rey as she seeks the aid of Luke Skywalker, in hopes of turning the tide for the Resistance in the fight against Kylo Ren and the First Order, while General Leia Organa, Finn, and Poe Dameron attempt to escape a First Order attack on the dwindling Resistance fleet.

When it’s discovered that the evil Emperor Palpatine did not die at the hands of Darth Vader, the rebels must race against the clock to find out his whereabouts. Finn and Poe lead the Resistance to put a stop to the First Order’s plans to form a new Empire, while Rey anticipates her inevitable confrontation with Kylo Ren. Warning: Some flashing-lights scenes in this film may affect photosensitive viewers.

With 11 new series in the works — plus 3 upcoming Star Wars feature films in 2023, 2025, and 2027 — there is sure to be plenty of additional Star Wars content added to this timeline in the near future. Stay tuned to Inside the Magic for everything you need to know about Lucasfilm’s upcoming slate of Star Wars stories.

If you want to stream all 15 stories (120 hours) of the Star Wars content on Disney+, but aren’t yet signed up for the service, you can get started here.