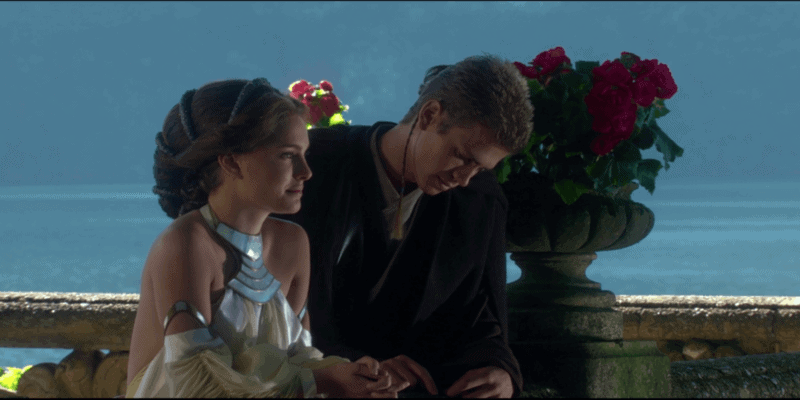 Okay, in the build-up to the release of Star Wars: The Rise of Skywalker, I decided to watch the older movies again. As I dealt with a cringing reminder of how awful the prequel trilogy really was, especially Hayden Christensen’s acting, I discovered something that, in my opinion, would save the prequels and bring a better understanding to the ending of Episode III: The Revenge of the Sith.

Padme never fell in love with Anakin. She fell victim to the biggest “Jedi mind trick” of The Skywalker Saga. Anakin was a mentally and emotionally abusive partner but he was too ignorant to know what he was doing.

Still with me? Okay, here’s why one of the galaxy’s biggest love stories is nothing but a tragic hoax and why it is also a cautionary tale about abusive relationships.

Since he first laid eyes on her, Anakin was obsessed with Padme. In Episode I, we see a nine-year-old boy use the corniest pick-up line ever on a 14-year-old girl: “Are you an angel?” It was all downhill from there. She was just trying to be nice to him, and he’s just another idiot who misinterpreted a girl’s friendliness for something else. It starts small because his powers are still small.

But Episode II is when Anakin does most of his manipulation. When they see each other again, she tells him, “You’re still that little boy I knew on Tattooine,” and while he’s on assignment protecting her, she talks about her ex-lovers. Both instances continue to drive Anakin insane. On top of that, his “security assignment” is basically to go off on a romantic country vacation to Naboo’s version of Lake Como with a gorgeous older woman. (Which, by the way, leads them to Tattooine where she meets this “young handsome rogue”‘s messed up family, and sees him go off and slaughter an entire village. RED FLAGS PADME!)

Anakin continuously gives her this look, and he is as pushy and flirty and creepy as every angsty 19-year-old boy. It makes her uncomfortable, but she’s also older, more experienced, and — expectedly — has her fun with him. But she had no idea, though, the Jedi mind trick at play that would get her to confess her love for him towards the end of the film.

Episode III shows Anakin with full possession of Padme. When she’s not playing senator, hiding her pregnancy, she is up in her fancy penthouse like a bird in her cage. Anakin discusses his fear of loss with Yoda, who reminds him that fear of loss stems from greed. That greed that need to possess Padme is what drives him to the dark side.

Anakin’s Power, and Demand for Control

Anakin is too powerful for his own good, he is an idiot, and his enslaved upbringing has him screaming for power and justice. We see this constantly in the prequel trilogy.

By Episode III, Anakin is at the height of his power as a Jedi Knight, but we also see his impatience as well as his fear of loss. He pitches a fit over not being granted the rank of Master after Palpatine subtly forces the council to give him a seat. His entire story arch is a fast slide to the dark side with the obsessive drive to keep Padme alive, distracting him from the Emperor’s coup.

He buys into the coup and tells Padme, “Love can’t save you. Only my new powers can do that… My powers are greater than the Emperor’s. I can overthrow him, and together you and I can rule the galaxy. Make things the way we want them to be.” Of course, both Padme and Obi-Wan turn against him, and he lashes out like every abusive partner.

In Episode I, we find out he has the highest count of midichlorians (Jedi cells) than any other Jedi ever recorded. The kid does pod racing and can fly. But when he is brought before the Jedi Council, they call him out on his inability to let go.

Episode II shows us an angsty teenager that is just trying to get laid and using his powers however he can. In his conversations and actions, we see a kid who is more interested in action and revenge over peace. It is this episode where the combination of his powers and recklessness cause him to pull the Jedi mind trick. Just like every manipulative person trying to catch his/her next partner, Anakin used the force.

There are several moments where Anakin gives Padme the creepiest look in the galaxy. You can see the gears turning in his head. The most common examples of Jedi Mind Tricks we see are when Jedi get people to think, say, or do certain things. George Lucas made it obvious to the audience by having Jedi use hand motions and talk out loud. But I don’t think that is necessary.

No matter who you are, every person has the same mental plea towards their crush: “Love me back!” The audience is made aware of Anakin’s feelings for Padme almost immediately. He pursues her through most of the film, which is albeit normal for any guy to do. The only problem is that he’s strong with the force. So, while the inner “Love me back” please of normal guys goes unheard, Anakin’s pleads turned into a Jedi mind trick. The mind trick was victorious when she finally confessed her “love” for him on Geonosis.

But Anakin also has a malicious motive for manipulating Padme. She constantly talks down to him and belittles him akin to the way Obi-Wan kept calling him a young padawan and apprentice. It digs at that chip on his shoulder, and he can’t put up with it.

Again, by the end of Episode III, Anakin knocked her up and all but re-wired her brain to revolve around him. What we have is the makings of an emotionally abusive relationship. They keep their relationship secret because it is only on when Anakin gives the green light.

But, he messed up. Padme still recognized the difference between good and evil. Because of the secrecy of the relationship, she is still a strong independent woman and could stay her course. She believed with all her heart, he was the “good guy.” To have her faith, her entire mental processes disillusioned in such a way created irreversible damage. She told him “Anakin, you’re breaking my heart. You’re going down a path I can’t follow.”

Anakin is the idiot that feels betrayed and casts her away after almost force-choking her to death. No longer having the man that had become her purpose of living was something her manipulated being could not handle, and she lost the will to live. She uses all her remaining energy to bring her kids into the world and dies of a broken heart.

Or perhaps it’s deeper than that. Palpatine tells Anakin — now Darth Vader — “It appears, in your anger, you killed her.” Now, Anakin would not be the first abuser to kill his partner in a fit of rage. But, to already have used the force on her in such a mentally damaging way unknowingly–and also counting on the trilogy’s corny-ness–I wouldn’t put it past him to send Padme to the afterlife in that classic “if I can’t have you, then nobody can” kind of way. It could also be the case that, like so many people who find themselves with abusive partners, it’s impossible for her to live without him.

The Tragedy of Anakin’s Ignorance

While he was great with his hands, Anakin was an idiot, and his perception of his relationship with Padme was a perfect example. I don’t think he had any idea what he was doing. He actually believed so desperately that she loved him that he was oblivious to the Jedi mind trick he was performing on her.

The man is former-slave scum from some backwater scum hole. He has no idea what love is. All he knows is subjugation–he goes from being a slave to being indoctrinated into the Jedi–and abandonment. His warped definition: one person with caretaker-style ownership of the other. By that definition, he really believed he loved her. Of course, we know it was blind possession which he chose over a free galaxy and the entire Jedi Order. Yeah, there’s good in him, but he’s just not a good guy.

But, again, Anakin’s stupid. So, he thinks he is a good guy, he thinks that he won the heart of the most beautiful girl in the galaxy. There is real-world truth in his story because many abusive partners don’t even know they are being abusive. They are too blind to see the evil they are inflicting.

And that ignorance made Anakin’s end that much worse. The love he had was a lie. His entire perception of love was wrong. His fight and his decision to join the Dark Side was all for nothing. The utter torment of these realizations–which pile on top of his perception that the people who raised him, the Jedi, were the real enemies–shatters every ounce of his inner peace.

So, as he took his first breaths through his helmet, Darth Vader truly concedes to the way of The Sith:

Peace is a lie, there is only passion.
Through passion, I gain strength.
Through strength, I gain power.
Through power, I gain victory.
Through victory, my chains are broken.
The Force shall free me.

I hope this interpretation of Anakin’s story has shed some new light on the story of Anakin and Padme, and I hope that this helped you all find a new appreciation for the prequel trilogy. Yes, they were the worst movies of the Skywalker Saga, but there is a lesson to be learned about the subtle nature of abusive relationships and the difference between obsessive possession and true, free love.

What do you think? Do you agree with this theory? What other points did I miss? Let us know in the comments.