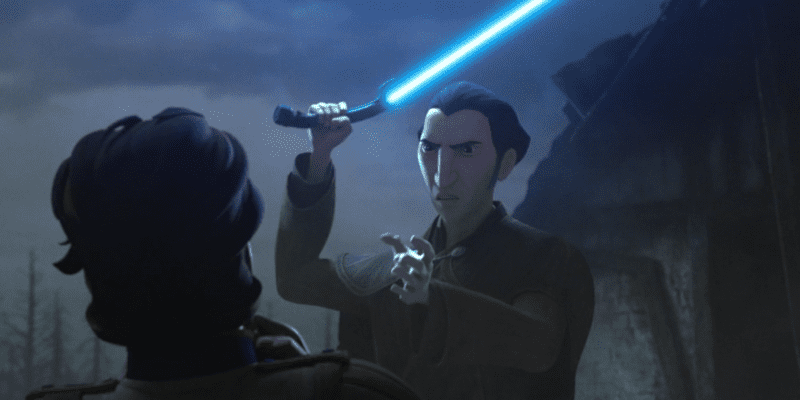 Star Wars: Tales of the Jedi continues with a story from the earlier years of the man we come to know as Count Dooku AKA Darth Tyranus…

We open with two Jedi landing their ship on a desolate planet. Their faces are familiar if younger than we might be used to: It is the man who will be known as Count Dooku (Corey Burton) and his Padawan, Qui-Gon Jinn (Micheál Richardson). They disembark onto a wasteland, with a droid picking bits of salvage from detritus scattered across a barren field. In the nearby village, doors are closed and lights are switched off in an effort to avoid visitors.

Related: Recap: ‘Tales of the Jedi’ Episode 1 “Life and Death”

They enter a tavern and ask: “Where is the Senator’s son?” This is a rescue mission. Senator Dagonet (Mark Rolston) has been neglecting his planet, and his people have acted in protest, unable to change their situation democratically. They are all involved in the plot and agree to take the two Jedi to see the welfare of this kidnapped boy.

In a barn on the outskirts of the town, Senator Dagonet’s son (voiced by Josh Keaton) is guarded by a large droid, Two-Ton, and armed villagers. Speaking to the Jedi, he says it has not been an ordeal, compared to the way the people have been living. He had no idea about the condition of the rest of the planet, staying in the capital or off-world on Coruscant. He doesn’t blame them for his kidnap.

At that moment, Senator Dagonet himself arrives, with a phalanx of armed guards. The villagers suspect the Jedi of luring them into a trap, which they vehemently deny. The senator demands the release of his son; Dooku says their investigation is not complete. Things escalate into a standoff.

“You serve the Senate,” demands Senator Dagonet. “No, I serve the people of the Republic,” replies Dooku. The situation erupts into blaster fire, with Dooku and Qui-Gon trying to protect as many of the villagers as possible from the barrage. There are casualties on both sides until the senator calls a halt — threatening to destroy the entire town to make an example of their attempted defiance.

In a frustrated rage, Dooku begins to Force choke the politician, lifting him off the ground with the power of his anger. “Corruption like yours must be eradicated,” Dooku spits.

Qui-Gon rushes to the son, freeing him and urging him to go save his father from Dooku’s wrath. He does and asks his father how he could do this.

With the senator’s ambition curbed and the villagers freed, the two Jedi share a moment of reflection. Dooku wonders if it will bring about meaningful change, and thanks his Padawan for managing to stay his hand.

Comments Off on Recap: ‘Tales of the Jedi’ Episode 2 “Justice”