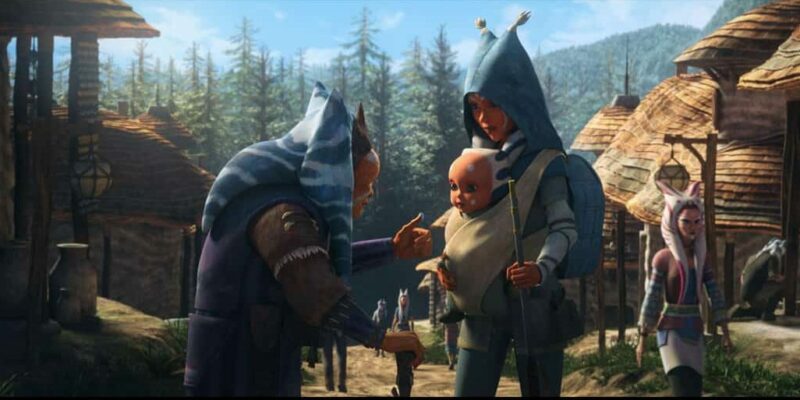 Dave Filoni’s latest has hit the Disney streaming platform, here’s everything that happened in the first episode of Tales of the Jedi…

Related: Ahsoka Tano: Everything You Need To Know

Welcome to Tales of the Jedi, Disney+’s latest animated Star Wars offering. Across six short episodes, it aims to fill in some key moments from the lives of some of the Star Wars galaxy’s most important Force wielders. This season — assuming it will have more — is centered around Anakin Skywalker’s Padawan and future Rebel agent Fulcrum, Ahsoka Tano, and Sith Lord Count Dooku.

Episode 1, “Life and Death”, opens on a starry night on the wooded planet of Shili. In a Togrutan village, nestled among trees, a man celebrates, rousing the villagers from their slumber. This is Nak-il, and his child has just been born. As the community gathers around the newborn and her mother, Pav-ti, village elder Gantika approaches. The parents reveal their new child’s name: Ahsoka.

A year passes, and Pav-ti is heading out on the hunt and taking baby Ahsoka with her. It is part of the Togrutan tradition to teach the flow of life and death. Nak-il thinks it is an outdated ritual; Pav-ti insists it is still important to uphold. As she walks out of the village, Gantika gives both a mark for good luck.

As mother and child walk through the forest, Pav-ti tells Ahsoka: “Everywhere there is life, feel it, hear it.” They stop near a grove of what appear to be huge dandelions. Pav-ti prods each, causing blossoms to float through the air and coo in delight. Her giggles are held quiet by her mother when they hear a braying nearby. It is a Kybuck, an antelope-like creature that is the target of their hunt. She aims with her rifle, exhales, and fires. Back at the village, Gantika utters a prayer.

In the clearing, Pav-ti raises her blade above the dying Kybuck. “You must face death, Ahsoka, do not fear it.” She brings her knife down, silencing the creature. “He will feed many.” But they are not alone in the forest. From the tree line, something huge watches. It is a huge feline stalking up behind the unsuspecting huntress. As Ahsoka gargles recognition, her mother spins around and in a moment, decides to roar loudly at the beast. It leaps back, surprised, as she throws herself at her rifle, firing off a barrage. The villagers hear the commotion in the forest and begin to rush toward her. They make it just in time, with Pav-ti using just her knife to keep it back from the baby. It is not enough: with a huge paw, it swats her aside.

As she lands far from her daughter, the village volleys blaster fire at the predator. It leaps, seizes Ahsoka in its jaws, and bounds back into the tree line. Pav-ti cries out, devastated at her loss.

But all is not over yet. Back at its den, the beast places Ahsoka down. Unfazed by her capture, she coos and gargles, almost delighted with her new furry companion. She sneezes, and it roars in shock; she places a gentle hand on its muzzle.

At the village, after finding no sign of the child or beast, they’ve nearly resigned themselves to her loss. But then there is the sound of something large approaching from the dark. The villagers’ jaws drop in shock. It is Ahsoka, returning astride the beast that took her. As it walks near, it lowers its head for her mother to take. She takes her from the creature, which pads away into the forest. Grantika can explain their astonishment: “Jedi. Ahsoka is Jedi.”

Comments Off on Recap: ‘Tales of the Jedi’ Episode 1 “Life and Death”