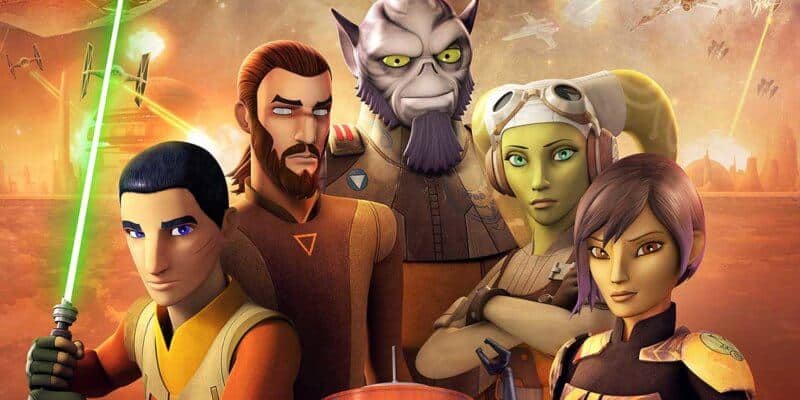 Star Wars fans are for sure being treated. With the hugely popular The Mandalorian already having wrapped two seasons, Dave Filoni’s The Bad Batch airing weekly, and a whole roster of upcoming Lucasfilm projects already announced, in the works, or even filmed and ready to go — the Star Wars franchise shows no sign of slowing down.

Last year, Lucasfilm President Kathleen Kennedy announced a massive new portfolio of Star Wars stories coming in the near future surrounding fan-favorite characters like Boba Fett, Lando Calrissian, Obi-Wan Kenobi, and Ahsoka Tano. With news ramping up and characters popping up here and there, one of these new Disney+ shows may actually be the catalyst for the return of a popular squad.

The Mandalorian‘s place in the Star Wars timeline — set around five years after the events of Star Wars: Episode VI – Return of the Jedi (1983) — is a very rich area for Star Wars. With so many spinoffs happening around the time of George Lucas’s original trilogy, The Mandalorian‘s Star Wars era can welcome pretty much anyone that exists (and is still alive, of course) from the entire stretch of the Skywalker Saga.

Announced during the 2020 Disney Investor Day event, The Mandalorian will be directly connected to three upcoming series — The Book of Boba Fett, Ahsoka, and Rangers of the New Republic. The Book of Boba Fett brings back the titular bounty hunter, played by Temuera Morrison, and Ming-Na Wen’s Fennec Shand, while Ahsoka sees the continuation of the popular character’s stint in live-action following her debut in The Mandalorian Season 2 with Rosario Dawson returning to play the Jedi Knight.

Rangers of the New Republic would have fleshed out this series event with Gina Carano’s character, New Republic Marshal Cara Dune, but according to Lucasfilm the show is “no longer in active development”.

With The Book of Boba Fett wrapped and coming to our screens this December, fans are expecting some interesting crossovers with The Mandalorian — it has, in fact, been called “The Mandalorian Season 2.5″ — while awaiting The Mandalorian Season 3. This is all increasingly exciting, especially when adding in what The Bad Batch has revealed so far about certain popular characters.

The Bad Batch joins Star Wars: The Clone Wars, Star Wars Rebels, and Star Wars Resistance in Lucasfilm’s library of animated series. And one very famous crew could actually be being lined up for a dramatic live-action return in Rosario Dawson’s Ahsoka.

In “Chapter 13: The Jedi” of The Mandalorian‘s Season 2, Jedi Ahsoka Tano went to battle with the magistrate Morgan Elsbeth over the location of her “master” — Grand Admiral Thrawn. Fans will know that Thrawn is the big bad of Star Wars Rebels, and along with Jedi Ezra Bridger, vanished out of existence during the animated series.

Dawson’s Ahsoka is likely to be hunting down Thrawn in order to find Ezra, which means both of the characters’ live-action debuts are likely to be imminent — reportedly, Thrawn has already been cast for months. If that’s not enough to suggest that the Ahsoka Tano series may serve as Rebels follow-up or sequel, another actress has recently alluded to her involvement in the upcoming Disney+ series.

Speaking on her Instagram story, Tiya Sircar — the voice actress of Ghost crewmember, Sabine Wren — answered a fan’s question about her Star Wars character’s potential role in the Ahsoka series:

“Of course this is the very first question I get. Guys, I can’t tell you anything. If I knew anything, I couldn’t tell you. I’d want to tell you, but I couldn’t. So, sorry, but I have no answer.”

There’s not much here to go on, but what there isn’t is a direct confirmation she is not appearing. Fingers crossed, Sircar will make her Sabine Wren debut in Ahsoka and bring (most of) the Ghost crew back together. There have been hints before that Sircar will bring the Rebels character to live-action.

And, then finally, Star Wars also seems to be lining up another character’s live-action debut after a recent episode of The Bad Batch.

Spoilers ahead for The Bad Batch Episode 11, “Devil’s Deal”

This week’s episode of The Bad Batch saw the return of the planet Ryloth, and the Twi’lek’s effort to work harmoniously with the rising Galactic Empire. Ryloth featured frequently in The Clone Wars, where clone troopers aided the planet during Separatist attacks so its feature in The Bad Batch isn’t that surprising. But, the episode also saw a young Hera Syndulla (Vanessa Marshall), as well as her droid companion “Chopper” (Dave Filoni), arrive back into the Star Wars franchise, confirming a rumored TV return.

This isn’t the first time a Star Wars Rebels character has shown up in The Bad Batch. The first episode saw a young Caleb Dume — the Padawan how would later become Kanan Jarrus (Freddie Prinze Jr.) — escape the clone troopers after the execution of Order 66 during the end of the Clone War.

Hera Syndulla eventually became the captain of the Ghost in Star Wars Rebels, and we know she is alive at least during the original trilogy due to her part in the Star Wars videogame, Star Wars: Squadrons, which takes place shortly after the Battle of Endor. Rogue One: A Star Wars Story (2016) also confirmed her status as General but the character did not directly feature in the anthology film.

Whatever does happen in Ahsoka, multiple signs point to a big Star Wars Rebels reunion in the upcoming series thanks to Lucasfilm quietly setting up this potentially momentous event. While the series will obviously focus on Anakin Skywalker’s AKA Darth Vader’s former Padawan, Star Wars fans know that Ahsoka Tano has been to many places, seen many things, and met many people, so it wouldn’t be unsurprising if the Disney+ series welcomed the famous Star Wars rebels into its cast.

The Star Wars universe is pulling tighter and tighter together.

Do you think we will get a big Star Wars Rebels reunion in Ahsoka? Let us know in the comments!