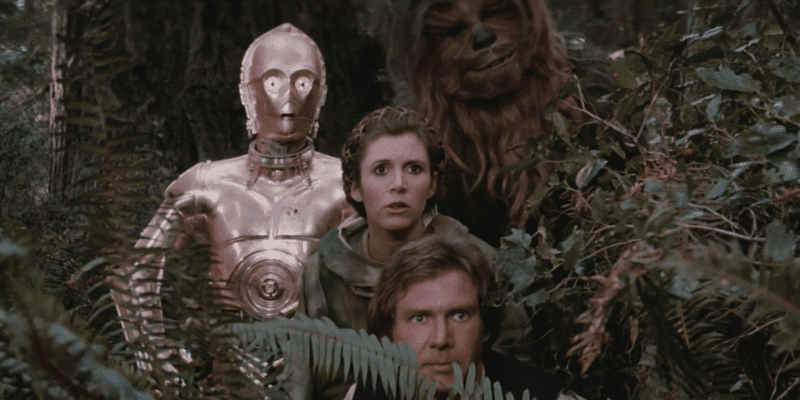 At the time, Star Wars: Episode VI – Return of the Jedi (1983), became the concluding installment in George Lucas’s Star Wars saga. Now, a further six films and a number of television shows have been released, padding out the ever-growing — and ever-changing — Star Wars universe.

While it’s probably easy to get distracted by the other Star Wars trilogy finales — the prequel’s, Episode III – Revenge of the Sith (2005) and the sequel’s, Episode IX – The Rise of Skywalker (2019) — let’s not forget how the original conclusion wrapped up the groundbreaking space opera epic.

This is your complete guide to Episode VI – Return of the Jedi.

Major plot points in Episode VI: Return of the Jedi

Where do we pick up with Episode VI?

The 1983 movie, which continues George Lucas’s iconic Star Wars story, opens a year after the disastrous events of Star Wars: Episode V – The Empire Strikes Back (1980). Luke Skywalker (Mark Hamill) found out the villainous Darth Vader (David Prowse) was his father — right after he chopped his hand off with his lightsaber — and Han Solo (Harrison Ford) was frozen in carbonite and stolen by the bounty hunter, Boba Fett (Jeremy Bulloch), to be delivered to the crime lord, Jabba the Hutt on Tatooine. It’s safe to say that Return of the Jedi had a lot of unraveling to do.

The movie opens with C-3PO (Anthony Daniels) and R2-D2 (Kenny Baker) bargaining for Han with Jabba at the request of Obi-Wan Kenobi’s former Padawan, all the while Princess Leia (Carrie Fisher) infiltrates Jabba’s Palace to free him. Eventually, the group is captured, but after a series of events involving a rancor, Boba Fett, and the Sarlaac pit, the crew of the Millennium Falcon escapes to continue their attack against the Galactic Empire.

What are the major plot points of Episode VI?

After the opening events on Tatooine, Return of the Jedi finally delivered some answers for Star Wars fans. Luke returns to the swamp planet Dagobah to reunite with Jedi Master Yoda (Frank Oz), who confirms that Darth Vader is Luke’s father and was once called Anakin Skywalker. Yoda also reveals that there is another Skywalker, before becoming one with the Force. Obi-Wan Kenobi (Alec Guinness) tells Luke that this other Skywalker is Princess Leia and she is his sister.

The Rebel Alliance gains new information that the Galactic Empire has started construction on a second Death Star. This new addition to the Empire’s forces is led by the mysterious Emperor (Ian McDiarmid), and due to its enhanced technology, the Star Wars heroes are led to the forest moon of Endor to take out its shield generator. During the coordinated assault on the Imperial forces — Han, Leia, and Chewbacca (Peter Mayhew) on Endor, and Lando Calrissian (Billy Dee Williams) leading the Rebel fleet. Meanwhile, Luke is once more dueling his father under the eye of the Emperor — who we learn is trying to lure Luke to the dark side of the Force.

Vader redeems himself after being overthrown by his son and seemingly kills the Emperor when Luke resists the temptation to join him. It should be noted too, that in hindsight, Boba Fett’s death would go on to become a major plot point due to his arrival almost forty years later in Jon Favreau’s The Mandalorian season 2.

What connections to previous installments of the Star Wars franchise are made in this episode?

Episode VI confirms Luke’s and Vader’s familial connection after that shocking Episode V moment. Han and Leia’s burgeoning romance blossoms and Luke learns more about the ways of the Force through his continued relationship with the Force ghost of Obi-Wan Kenobi, which was established six years prior in Star Wars: Episode IV – A New Hope (1977).

What new characters do we meet in Episode VI and how do we meet them?

While Return of the Jedi builds upon the stories of its existing characters, the Star Wars film does introduce and flesh out some newcomers. The most famous new character to appear in Return of the Jedi is perhaps McDiarmid’s Emperor, who enters the franchise aboard the second Death Star.

Sure, fans caught a glimpse of the villain in the previous episode, but it is in the original trilogy’s conclusion that audiences finally came face to face with the nefarious character. Of course, sixteen years later, the Emperor would get his own origin story in the prequel trilogy beginning with Star Wars: Episode I – The Phantom Menace (1999) as Chancellor Palpatine.

Wicket W. Warrick, the Ewok savior, is introduced as the heroes traverse Endor (but more on them later). Return of the Jedi also saw the arrival of Admiral Ackbar (Timothy D. Rose), the Mon Calamari military commander, and Nien Nunb (Richard Bonehill), who co-pilots the Millennium Falcon with Lando during the Battle of Endor.

Who are the most important new characters in Episode VI and why?

The Emperor is the most important new character in Episode VI. Not only does the arrival of this villain show that Darth Vader was never acting alone in his Galactic conquering endeavors, but also gave Lucas’s Star Wars franchise its overarching “big bad”.

How do these new characters change the plot from Episode VI and onwards?

While characters like Admiral Ackbar and Nien Nunb do reappear later on in the Star Wars Skywalker Saga, it is The Emperor that ultimately alters the franchise’s history. In Star Wars: Episode VII – The Force Awakens (2015) we see the arrival of the First Order — echoing the Empire’s galactic takeover. And then in the sequel trilogy conclusion, Episode IX – The Rise of Skywalker, Palpatine returns, revealing himself to be the orchestrator of the First Order and the reason behind Supreme Leader Snoke’s creation. The main protagonist of the sequel trilogy, Rey (Daisy Ridley), was even revealed as the granddaughter of the Emperor.

In the Star Wars timeline, though, there is in fact another entry into the saga that comes before the events of the sequel trilogy. The Mandalorian premiered on Disney+ in 2019 and takes place five years post-ROTJ, meaning there are still remnants of the Galactic Empire. The show may also be the precursor to the First Order’s inevitable creation.

All about the Ewoks in Episode VI: Return of the Jedi

Who are the Ewoks?

Star Wars’ Ewoks are perhaps one of the franchise’s most recognizable species. Inhabiting the forest moon of Endor, the furry characters helped the Rebellion turn the tide against the Imperial Forces despite their small stature and only wielding weapons like spears and knives.

Do the Ewoks have names, and if so, what are they?

Ewoks do have names, but you won’t find them in Return of the Jedi. In fact, the species name was also completely absent from Lucas’s film. As StarWars.com points out:

The word Ewok is never mentioned in Return of the Jedi and neither is one of the Ewok names. A handful of Ewoks were named by the production or were mentioned in the novelization. Six Ewoks are mentioned on the credits of Episode VI. Wicket is the most famous by far.

Wicket W. Warrick — the Ewok befriended by Princess Leia — was portrayed by Warwick Davis. The other Ewoks that appeared on the Return of the Jedi credits were named — Chirpa, Logray, Paploo, Teebo, and Nicki. The Ewoks were further explored in the Star Wars expanded universe, namely in the two television movies — Caravan of Courage: An Ewok Adventure (1984) and Ewoks: The Battle for Endor (1985).

How do the Ewoks affect the plotline of the Star Wars saga?

The Ewoks are an integral part of the Star Wars saga. If it wasn’t for their aid on Endor, the Rebel Alliance would have been overthrown in their attempt to fend off the stormtrooper army and crush the Galactic Empire, paving the way for the completion of the second Death Star and its planet-destroying capabilities.

How does Episode VI set up the beginning for Episode VII?

At the time, Return of the Jedi seemed to have a pretty closed ending. The Galactic Empire is in ruin, Luke and Leia are related and Darth Vader redeemed himself at the very end leading to his Force ghost joining Yoda’s and Obi-Wan Kenobi’s in the final scenes. Looking back though, it would be Emperor Palpatine’s quest for vengeance that would lead to the events of the sequel trilogy. While not completely alluded to in Episode VII – The Force Awakens, the story of Darth Sidious was explored as the trilogy went on.

What are the loose threads that are left at the end of Episode VI that will be tied up, or further complicated, in Episode VII?

As the film wraps up, the romance between Han and Leia is seemingly there to last, however as fans saw in The Force Awakens, the time hasn’t been easy on the fan-favorite couple. The 2015 movie, directed by JJ Abrams, showed an even more hardened Han Solo and Leia leaving questions as to why their relationship broke down. As it happens, it was the fall of their son, Ben Solo AKA Kylo Ren (Adam Driver), to the dark side of the Force that broke them apart.

What else should you know about the transition between Episode VI and Episode VII?

There are thirty years that pass between the events of these two blockbuster films. Not much was known about the events that transpired in between Return of the Jedi and The Force Awakens but Din Djarin’s (Pedro Pascal) and The Mandalorian’s entry into the Star Wars canon provided information of a post-Empire universe, like the survival of some Imperial forces namely Moff Gideon (Giancarlo Esposito) and his Dark Troopers.

Star Wars has also used other forms of media to tell the stories of the characters in the gaps between the movies as well as before and after. In Bloodline by Claudia Gray, we see Leia Organa attempting to stand as Chancellor of the New Republic as a reaction to the increasing level of criminal activity spreading throughout the galaxy.

In Charles Soule’s The Rise of Kylo Ren, fans saw the origins of Ben Solo’s transition from Jedi to Sith. And, in Star Wars’ new Marvel Comics series — Darth Vader — the planet Exegol and Palpatine’s Sith Eternal were already hard at work playing with cloning and building the new Star Destroyer fleet.

Return of the Jedi was written by Lawrence Kasdan and George Lucas and directed by Richard Marquand for Lucasfilm. The Star Wars movie grossed over $400 million at the global box office.

The Star Wars universe expanded even more so when Disney Parks opened Batuu to the public at Star Wars: Galaxy’s Edge in both Walt Disney World and the Disneyland Resort.

If you want to read more guides to the original Star Wars movies, then we have complete guides to both A New Hope and The Empire Strikes Back.

What is your favorite Return of the Jedi moment?

Comments Off on ‘Star Wars Episode VI Return of the Jedi’