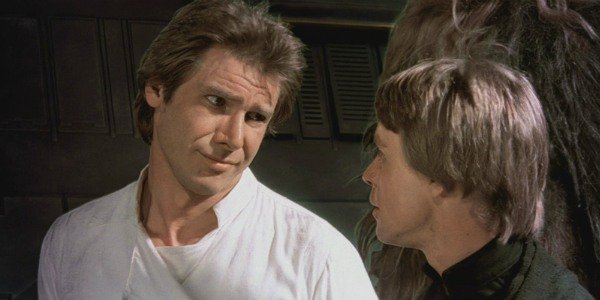 Mark Hamill is not only well-known for his starring role as Luke Skywalker in George Lucas’s Star Wars franchise, but the actor has also solidified himself as a leading social media commentator. He often shares content online such as hilarious takes on scientific discoveries or reacting to a dog seeing his fictional father, Darth Vader, on-screen for the first time.

Something else Hamill does is discuss his Star Wars costars, and recently he clapped back at society over Han Solo himself, Harrison Ford.

Hamill gained international fame after he was cast in George Lucas’s Star Wars in 1976. A relative unknown at the time, the actor went on to star in the Star Wars original trilogy sequels, Episode V – The Empire Strikes Back (1980) and Episode VI – Return of the Jedi (1983).

He reprised his role as Luke Skywalker again many years later in Lucasfilm’s sequel trilogy, appearing in all three installments — Episode VIII – The Force Awakens (2015), Episode VIII – The Last Jedi (2017), and Episode IX – The Rise of Skywalker (2019). Hamill shocked fans last year when a young Luke Skywalker — albeit rendered with CGI — had a secret cameo in the finale of Jon Favreau’s The Mandalorian Season 2.

Now, Hamill is once again backing up his Star Wars costars. While many people know that Harrison Ford is famed for his dry humor and almost lackadaisical demeanor, Hamill recently weighed in on Ford’s attitude while sharing a behind-the-scenes snapshot from the set of Return of the Jedi.

What did Mark Hamill say?

Commenting on clips of himself, Ford, and Carrie Fisher (Princess Leia), the Star Wars actor alluded to society’s take on Ford and clapped back at the untrue sentiments.

“Harrison would make a great director if he wasn’t so lazy.” -mh Half this statement is true. Calling him lazy was also & a snarky remark, based on his well-known “laid back” personality. Watch the great director in him teach us how to nail the laugh in this scene from #ROTJ

"Harrison would make a great director if he wasn't so lazy."-mh Half this statement is true. Calling him lazy was false & a snarky remark, based on his well known "laid back" personality. Watch the great director in him teach us how to nail the laugh in this scene from #ROTJ?? https://t.co/8jqx9PW2uh

As Hamill stated, Ford’s “laid back” personality has never been a secret. The Indiana Jones actor has never hidden his feelings towards the Star Wars franchise, and most recently he shared his thoughts and opinions on the editing of one of his other movies, Blade Runner (1982), at the 2021 Oscars ceremony.

The behind-the-scenes footage is indeed candid. Return of the Jedi opened in 1983, following the huge success of The Empire Strikes Back three years earlier — the sequel is often lauded as one of the greatest movies of all time and not just in the Star Wars universe.

Return of the Jedi saw Luke Skywalker rise to his legacy of becoming a Jedi Knight, finally facing his father, Darth Vader (Dave Prowse), and the evil Emperor Palpatine (Ian McDiarmid) in the ultimate battle of good vs. evil. The Star Wars film — which is part of the greater Skywalker Saga — grossed over $400 million at the global box office and was the highest-grossing movie of 1983.

Star Wars fans didn’t really know what happened in between the events of Return of the Jedi and The Force Awakens until the launch of The Mandalorian on Disney+ in November 2019. The bounty hunter series takes place five years post-ROTJ and sees Pedro Pascal’s Din Djarin, the eponymous Mandalorian, take charge of leading The Child AKA “Baby Yoda” AKA Grogu back into the hands of the Jedi, all while being pursued by Moff Gideon (Giancarlo Esposito) and his Dark Troopers.

Little is known of Hamill’s return to the Star Wars franchise. Despite rumors of a Luke Skywalker Disney+ television series, fans are clamoring to see Sebastian Stan take on the character of a young Luke Skywalker due to his considerable likeness to Hamill in the original trilogy.

As for Ford, the actor will star in the next installment of the Indiana Jones franchise alongside Mads Mikkelsen and Phoebe Waller-Bridge.

Would you like to see Harrison Ford as a director?