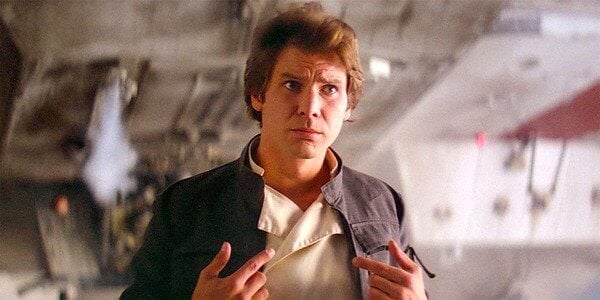 Harrison Ford, the much beloved actor of the Indiana Jones and Star Wars franchises (among others!), has cemented himself as a pop culture icon since his career began in an uncredited 1966 appearance in Dead Heat on a Merry-Go-Round. He is most well-known for playing the lovable rogue space-smuggler, Han Solo, in George Lucas’s Star Wars saga which began back in 1977, with Star Wars: Episode IV – A New Hope.

Ford has carved out an illustrious career starring in many blockbuster films, including Francis Ford Coppola’s The Conversation (1974) and Patriot Games (1992), where he starred as Tom Clancy’s Jack Ryan. The actor is also known for his humor, dry wit and the undeniably sarcastic charm he brings to many of his interviews and real-life appearances.

The Blade Runner (1982) actor has a famous distaste for the Star Wars franchise, making it well-known that he is often opposed to talking about the pop culture phenomenon — unlike co-star Mark Hamill (Luke Skywalker) who has gone on to embrace the Star Wars fandom, regularly engaging in online conversations and sharing behind-the-scenes trivia.

Despite his relatively low-key lifestyle, Ford did appear on television screens last night at the 93rd Annual Academy Awards in Los Angeles — which saw Marvel’s Eternals director Chloé Zhao win Best Picture for her film, Nomadland (2020) and Disney Pixar’s Soul (2020) take home the Best Animated Feature prize. Ford presented the Academy Award for Best Editing and introduced the award in an unusual manner. The often-surly actor, began by sharing some “editorial suggestions” for one of his ’80’s movies — Blade Runner. Ford played the character of Rick Deckard in the science-fiction thriller, before returning to the role in Blade Runner 2049 (2017) with Ryan Gosling.

Ford’s speech was met with chuckles from the audience and subsequently blew up the internet, where he trended on Twitter almost immediately, due to his comical comments and, well, just for being authentically Harrison Ford.

I love how no matter where Harrison Ford is, you can tell he doesn’t want to be there

I love how no matter where Harrison Ford is, you can tell he doesn't want to be there

pov you’re harrison ford being asked to present at the oscars:

pov you’re harrison ford being asked to present at the oscars: pic.twitter.com/dOPO4fxCnh

LOOK AT HOW MUCH POWER THIS MAN HAS. HARRISON FORD LITERALLY BREATHES AND WE GET HIM TRENDING ON TWITTER BYEEEE

LOOK AT HOW MUCH POWER THIS MAN HAS. HARRISON FORD LITERALLY BREATHES AND WE GET HIM TRENDING ON TWITTER BYEEEE pic.twitter.com/42v48GrE1i

But, it would look like Tony B. (@TonyBravoSF) summed up Ford’s Academy Awards Best Editing introduction speech:

And, if being “The. Man.” isn’t enough, friend and Star Wars co-star, Mark Hamill weighed in on Ford’s speech:

Notes from the same studio executives who thought it was very important to put pants on the Wookiee. #HarrisonHilariousAsUsual

Notes from the same studio executives who thought it was very important to put pants on the Wookiee.#HarrisonHilariousAsUsual ? https://t.co/Z3MXzjUeTE

It would seem that as time goes on the love for Harrison Ford just grows more and more — even if he remains ambivalent. His appearance at the Oscars ceremony where he shared insider information to his Hollywood peers will probably go down in history as one of the more comical awards show speeches. And, it’s so clear that the Star Wars actor can still command a room, and as Solo would say — “Don’t everyone thank me at once.”

What’s next for Harrison Ford?

Ford — who is married to fellow actress Calista Flockhart — will next appear in the fifth installment of the Indiana Jones franchise — despite those Chris Pratt rumors. While there is no official confirmation of what will happen in the next rousing Indy adventure, it has been revealed that Phoebe Waller-Bridge and Mads Mikkelsen will star alongside Ford’s rugged archaeology professor in the much awaited follow up.

The Indiana Jones movies were acquired in the Walt Disney Company’s Lucasfilm buyout in 2012. The movie series began with Raiders of the Lost Ark (1981) — produced by the Oscar-nominated Frank Marshall — after George Lucas collaborated with director Steven Spielberg on the project.

Indy’s initial outing was a commercial success, spawning three sequels — Indiana Jones and the Temple of Doom (1984), Indiana Jones and the Last Crusade (1989) — alongside the late James Bond actor, Sean Connery — and Indiana Jones and the Kingdom of the Crystal Skull (2008). Spielberg won’t be directing the fifth feature film, handing over the reins to James Mangold. The movie is expected sometime in 2022 with Lucasfilm President Kathleen Kennedy attached as producer.

Ford most recently appeared in Chris Sanders’s The Call of the Wild (2020). His role of the frontiersman, John Thorton, was Ford’s first movie appearance after reprising his role as Han Solo in the Star Wars sequel trilogy which began with Star Wars: Episode VII – The Force Awakens (2015). Ford joined fellow original Star Wars actors, Hamill and Carrie Fisher (Princess Leia Organa) in Disney’s conclusion trilogy to the Skywalker Saga.

Did you see Harrison Ford present at the Academy Awards?