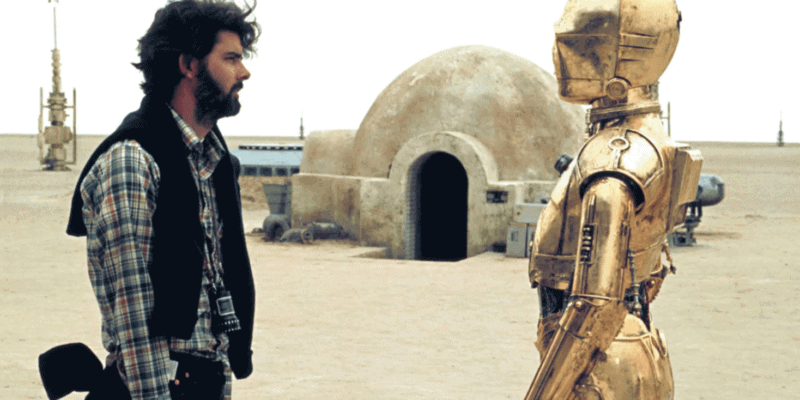 In 2012, The Walt Disney Company bought Lucasfilm, bringing the allure of a galaxy far, far away under the banner of the most magical company on earth.

Since then, Star Wars has become an integral part of the Disney universe — Jon Favreau and Dave Filoni’s hit Disney+ show, The Mandalorian, is the cornerstone of Disney’s streaming platform and Star Wars: Galaxy’s Edge at both Disneyland Park and Disney’s Hollywood Studios Park has allowed Guests to live their own Star Wars sagas on the planet of Batuu.

But, as exciting as it is to have Disney’s team of magic makers and Imagineers infusing the next chapter of the Star Wars story, many fans have wondered, “Why exactly did George Lucas sell Lucasfilm?”

Now, in the new book, The Star Wars Archives: 1999-2005 — the years of the prequel trilogy, including what is chronologically the very first film in the Skywalker Saga, Star Wars: Episode I – The Phantom Menace — Lucas has explained his decision to sell in his own words. According to ComicBook, the book states:

“In 2012, I was 69. So the question was, ‘Am I going to keep doing this the rest of my life? Do I want to go through this again?’. Finally, I decided I’d rather raise my daughter and enjoy life for a while. I could have not sold Lucasfilm and gotten somebody to run the productions, but that isn’t retiring. On The Empire Strikes Back and Return of the Jedi I tried to stay out of the way but I couldn’t. I was there every day. I’m one of those micromanger guys and I can’t help it. So I figured I would forgo that, enjoy what I had and I was looking forward to raising my daughter. I’ve spent my life creating Star Wars, 40 years, and giving it up was very, very painful. But it was the right thing to do.”

Lucas and Disney already had a long-standing relationship in 2012, so the sale made sense from that standpoint as well and — although Lucas has officially given-up control of the Star Wars and Indiana Jones franchises — he’s still around.

He even met Grogu — formerly known as “Baby Yoda” and “The Child” — on the set of The Mandalorian when Season 2 was filming! There are even some rumors that he would return to helm another Star Wars movie if full creative control was granted — only time will tell if this ever happens, however.

While the Star Wars fan community (myself included) may not love everything Disney has done with the franchise, I wouldn’t trade the ability to visit a Disney Park and sit in Han Solo and Chewbacca’s Millennium Falcon for anything — talk about magical!

So, thank you, George, for giving Disney the chance to transport us to a galaxy far, far away like only they can — and thank you, Favreau and Filoni, for so elegantly fixing sequel trilogy plot holes.

What do you think? Are you glad George Lucas let Disney buy Lucasfilm and take over the Star Wars franchise? Where do you hope Disney goes next?