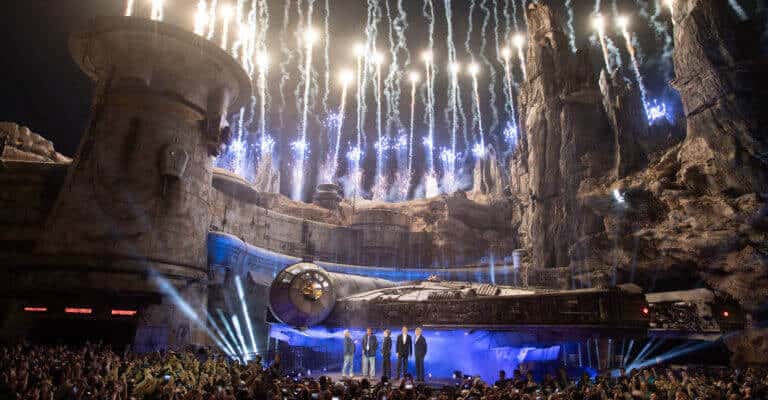 When Star Wars: Galaxy’s Edge was first announced at the 2017 D23 Expo, fans were promised “a galaxy of stories” and Disney, true to form, delivered.

From the moment you step through the Batuu arches, you very literally feel as though you’ve set foot on another planet. From the 100-foot-long replica of Han Solo’s Millennium Falcon — now Chewbacca’s (the Disney Parks version of Batuu falls after Solo’s death) — to the First Order flags hanging from the buildings, it’s truly like visiting a galaxy far, far away.

For those unfamiliar with the Outer Rim planet, StarWars.com provides this description:

Batuu was once a thriving stop for traders and travelers before advancements in lightspeed technology. Now its lush forests and majestic mountain regions are known only to those who dare to venture this far into the Outer Rim. At the infamous Black Spire Outpost, smugglers and rogues peddle their wares among the towering remains of petrified trees while the locals cook up exotic dishes and spin tales of ancient settlers long forgotten. Recently, the struggle between the First Order and the Resistance has made its way to this remote locale, once a haven for those hoping to avoid entanglements with the First Order.

After visiting, many Disney World and Disneyland Guests want more Batuu and Black Spire Outpost in their lives. If you’re a casual Star Wars fan, you might be wondering, “Which Star Wars movie is Batuu in?”

And, if you’re a diehard Star Wars lover, you already know the answer to this question is “None.”

That’s right — Batuu has yet to even be mentioned in any Star Wars movie or series. Here’s why.

Imagineers wanted Guests to create their own stories.

Walt Disney Imagineering pulled out all the stops when it came to designing and developing their Star Wars lands on both coasts. Each intergalactically themed expansion cost a cool billion dollars, with every detail carefully considered — including the backstories of both rides, Star Wars: Rise of the Resistance and Millennium Falcon Smugglers Run.

From the start Imagineers have been adamant about having Guests play a role in the Star Wars land expansion. They never wanted Guests’ new adventures to get lost in existing Star Wars film storylines.

Soon after Disney announced the project, we reported:

Imagineers have partnered with Lucasfilm designers – the very same ones who are creating the latest installments of the “Star Wars” cinematic universe – to create a theme park land unlike any other, one that truly will live up to its “immersive” description. At Star Wars Celebration 2017, the group leading the project revealed new details about how deeply interactive the experience will be for each guest.

“Your choices matter,” said Imagineer Asa Kalama, who plays an integral role in the development of the interactivity guests will enjoy as part of these still unnamed Star Wars Land experiences….When guests step foot inside, they will be surrounded by a new “Star Wars” story – their story. And each move they make will make an impact on how the experience plays out.

There are other ways to learn more about life on Batuu.

Rather than focusing on including Batuu in the sequel trilogy, standalone films like Solo: A Star Wars Story, or any Star Wars streaming series on Disney+, the Galaxy’s Edge team has focused on other avenues to introduce fans to Batuuvian culture.

In an interview about the Star Wars: Galaxy’s Edge Trading Post merchandise collection that debuted at Target earlier this year, Imagineer Scott Trowbridge has said that, “Star Wars has always been a place to experiment with new and innovative forms of storytelling.”

This includes, of course, numerous books, like Traveler’s Guide to Batuu and The Art of Star Wars: Galaxy’s Edge.

In the same interview, Trowbridge shared that The Walt Disney Company and Lucasfilm are dedicated to working to “extend the world of Galaxy’s Edge” into people’s homes via various mediums, including books, merchandise, and video games.

These forms of media help Disney Parks Guest who want to learn more about Batuu discover characters like Vi Moradi, Oga Garra (of Oga’s Cantina), Kat Saka (of Kat Saka’s Kettle), and newcomers Ellie and Salju — two Blackspire Outpost residents who appear in a children’s book called Ellie and Me.

How could Disney include Batuu in a movie or series?

While the storylines for the next three Star Wars films, the next of which releases in 2023, have yet to be revealed, Taika Waititi has announced he’s begun writing his installment, presumably slated for 2025. Batuu could show-up — or even be merely mentioned — in one of these upcoming films.

There are a few reasons for this.

This means that introducing the planet in The Mandalorian wouldn’t interrupt or impact the theme park timeline. It would also allow showrunner Jon Favreau and his crew to explore Batuu closer to the time period in which the original trilogy takes place, possibly satiating Star Wars purists who aren’t all big fans of how Disney has handled the franchise.

Furthermore, The Mandalorian hearkens back to everything that was great about George Lucas’s original Star Wars films. It’s a little gritty, a little rough around the edges, and a lot story-driven. All of this plays perfectly into the culture Disney Imagineering has created on Batuu.

We also already know there’s a The Mandalorian Season 3 — and possibly even Season 4 — coming down the pipeline.

Would you like to see Batuu appear in a Star Wars show or film?