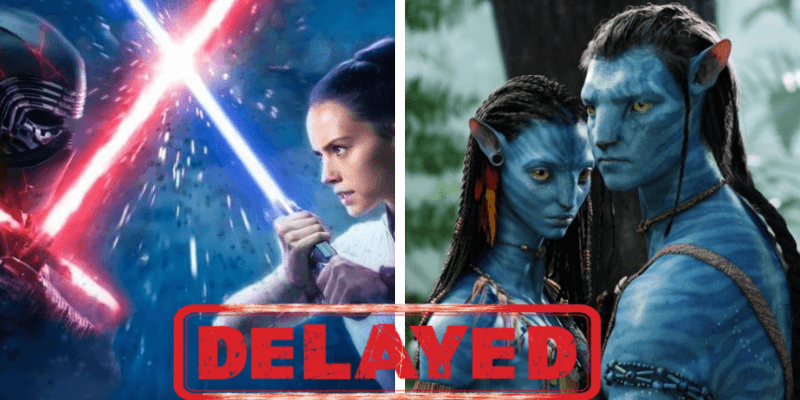 With the entertainment business having to make changes with the temporary halt of all operations over the past few months, Disney has announced that several of their films’ release dates will be pushed back.  These films include Mulan, Star Wars films, and Avatar sequels.

Mulan has been delayed indefinitely, while the Star Wars and Avatar movies have been delayed by one year each. As can be seen below, an untitled Disney Live Action film will take the place of Avatar 2 on the movie release schedule.  With Walt Disney Studios set to start production on the Peter Pan live action in March of 2021, there’s a possibility that is could be the film to take the place of Avatar 2.  Another live action film possibility could be The Little Mermaid with no confirmed release date.

ALSO: Disney pushed back the release dates for three Star Wars movies and four Avatar sequels by one year.

There is a lot that goes into a production of a film and with current theater closures, there can’t be a theatrical release.  This isn’t just an issue with box office numbers either.  A production of a film has the atmosphere of a theater in mind, the sound and lighting among other factors, so releasing a film straight to streaming if it wasn’t planned for that could deter from audiences’ experience with the film.  In the Tweet below, you can find the release schedule with the new release date for each of the Avatar and untitled Star Wars movies affected.

Avatar Director, James Cameron expresses in a letter below how disappointed he is to not be able to bring Avatar fans the sequel we’ve been waiting for on its original release date.  With California state ordinances not allowing for non-essential businesses to operate indoors, this puts a continued pause on the work that production needs to do in studio rather than on set in New Zealand.  It is great news that Walt Disney Studios is still in support of these movies being produced and released for our enjoyment!

A message from James Cameron.