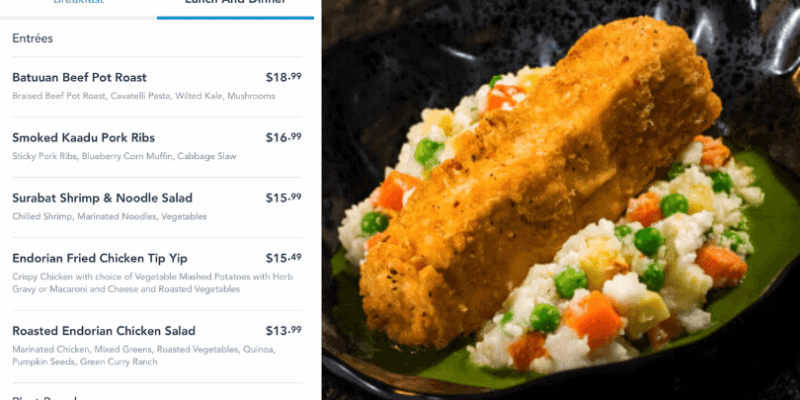 If you’ve been following the latest news regarding Star Wars: Galaxy’s Edge at Disney Parks, then you probably know that Disney has been changing the themed names of some of the menu items in the land. First, the themed names were removed from food items on the menu at Docking Bay 7 Food and Cargo at Walt Disney World, then they were returned after guest uproar took the internet by storm.

But now, it looks like the menus for Docking Bay 7 Food and Cargo at Disney’s Hollywood Studios in Walt Disney World and Disneyland on the west coast have now changed. And this time, the food items now have names that seem to be a hybrid of English names and Batuu names.

As you can see in the screenshot of the Lunch and Dinner menu for Docking Bay 7 Food and Cargo at Walt Disney World — or as some call it, at Batuu East — the names of food items now have a mix of English words and  Star Wars-inspired words. An item that would have previously been known as the Fried Endorian Tip Yip, which was later changed to simply Fried Chicken, is now called the Endorian Fried Chicken Tip Yip. Other items have been changed as well.

Here’s the original menu with the  Star Wars-themed names:

Here’s the menu after Disney removed the themed names two weeks ago:

And here’s the latest menu, as of this week:

The menu at Docking Bay 7 Food and Cargo at Batuu West (what many call Star Wars: Galaxy’s Edge in California) also displays these latest changes with the hybrid names:

Fans of Star Wars: Galaxy’s Edge — and others who are just concerned with Disney’s approach to immersion and theming — have shared their distaste for the menu changes. Many think that as long as the menu items have descriptions listed under their names, then there shouldn’t be confusion and the menu should therefore stay the same as it was when Galaxy’s Edge first opened.

But on the flip side, with such a high volume of tourists from all over the world visiting Disney Parks, it might make sense for Disney to clear up some of the possible confusion that guests may face when ordering food at Docking Bay 7 Food and Cargo.

So far, it doesn’t look like any of the themed names for food or drink items at other locations throughout Star Wars: Galaxy’s Edge at both Disney’s Hollywood Studios and Disneyland have changed significantly, although we’re not sure if they will since things like Blue Milk and Kat Saka’s Kettle outpost mix are pretty self explanatory. At the time of this article’s publication, Ronto Wraps are still known as Ronto Wraps. But should that change, we’ll let you know.

Want to visit Star Wars: Galaxy’s Edge for yourself? There are plenty of food and beverage locations to check out within the land other than just Docking Bay 7 Food and Cargo. When you visit the land in Disneyland or Walt Disney World, you can try offerings from the Milk Stand, Ronto Roasters, and even Oga’s Cantina, as well as try experiences like building your own droid or lightsaber. Plus, in addition to Millennium Falcon: Smugglers Run, Star Wars: Rise of the Resistance opens at Batuu East this December and at Batuu West in January.

An Authorized Disney Vacation Planner at Academy Travel can help plan the perfect vacation to Disneyland or Disney World — and even include tips for exploring Black Spire Outpost at Star Wars: Galaxy’s Edge! Click here for a free, no-obligation quote from Academy Travel to start booking your next Disney trip.

What’s your take on the changes to the themed names of menu items at Star Wars: Galaxy’s Edge? Let us know in the comments.